Everybody loves the sound of a train in the distance. Maybe you should keep yours.

In Big John Games’ post-apocalyptic train simulator, Lionel City Builder 3D: Rise of the Rails, the world is in ruin. The only things left intact are the world’s train tracks and your collection of old trains. The story ends there. There are 16 short missions covering basic train tasks like moving passengers and delivering cargo, but the world never feels very destroyed. The last two missions are the only ones that are difficult at all. The rest all feel like tutorials for harder levels that never come. 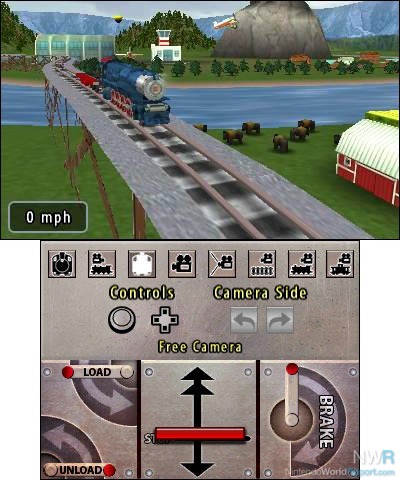 The meat of the game is supposed to be Creative Mode. In Creative Mode, you build a city and track for their trains to drive on. You cannot apply objectives or even pick up passengers. Tracks can be shared through QR cards, but I had trouble getting the 3DS camera to read them.

Placing the tracks is quite a pain. Each of the seven environments loads with a preset layout of tracks. You can then grab a piece of track and wiggle it, moving the entire track with it. I spent almost twenty minutes trying to undo a loop I accidentally created in my first town. Tracks can go anywhere without any complications, so you can drive a train through the side of a mountain or through a building.

A decent number of objects can be scattered throughout the map, like buildings and shops, but a lot of them look super similar. Each house comes in a few color variations and it’s hard to even tell the skyscrapers apart. Most objects have values attached to them. The goal is to balance objects so that everyone has a job, food, and is happy, but objects need to be placed close to each other to count. After hours of careful balancing failed, I ended up placing every object in the exact same spot to please everyone. 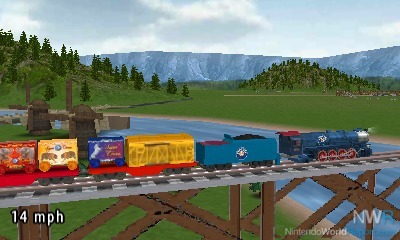 Driving the train is pretty boring, no matter how nice your town is. You can speed up, slow down, stop, and reverse your train, and each engine has a different top speed. You can choose from a handful of different engine and a dozen or so train cars. The camera stays focused on the train in seven of the eight camera modes, making it difficult to even appreciate your world. The graphics are awful, even by handheld standards, and there’s only one song.

There are achievements to unlock, such as building in a new environment or driving a train at a certain speed, but they certainly are not satisfying. The final achievement I got was for driving on 1,000 miles of track. The fastest train tops out at 130 MPH, so that’s almost ten hours of train driving. Getting achievements doesn’t actually unlock anything, though. There isn’t a secret second story mode hidden behind those ten hours of train driving. I tried.

This game might not be a ton of fun, but I fell in love with it once or twice. It’s a train set, even if it is pretty limited, and that’s okay. I do wish there had been more to the story mode or an unlock system of sorts for more objects.