This RPG is essentially a parody of EarthBound that manages to hit most of the right notes.

In a lot of ways, the new 3DS RPG Citizens of Earth is like a modern-day EarthBound. The debut title from developer Eden Industries feels like a throwback, with a charming world that is a skewered depiction of reality complete with mysterious coffee shops, walking stop signs, and so much more. While the adventure focuses more on tongue-in-cheek quirkiness and humor than EarthBound’s earnestness and sincerity, the gameplay, universe, and design offer constant reminders of the SNES classic. 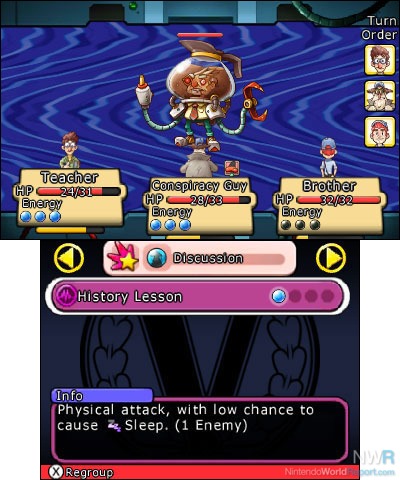 Where it differs from EarthBound is what makes Citizens of Earth unique. It contains a fun, engaging storyline to go through as the newly christened Vice President of the World, but a lot of the exemplary portions are found in the world that is filled with side quests and characters to recruit. Your avatar – the VP – doesn’t fight. Instead, you recruit citizens ranging from your own brother to a homeless guy to do your bidding in turn-based battles. The battle system is simple; with parties of three, you have a varied set of attacks and abilities that build and grow as you level up each citizen. You can recruit 40 different citizens, each with their own unique abilities. Discovering how each character fares in battle is awesome, even if some of them seem to be clearly inferior. To a degree, Citizens of Earth suffers from having too many characters because the choice can become overwhelming. Fortunately, there are tricks to expedite leveling up, such as a training school where you can leave citizens for a period of time to earn experience automatically. You could totally rock the same three-citizen party for most of the game if you really wanted to, but switching it up for specific sections and battles can be incredibly beneficial. For example, different citizens have elemental attacks and abilities that are more effective against certain enemies.

The citizens all have their own special ability outside of battle as well. For example, the Psychologist lets you enter the mysterious Dream World, the School Mascot can change the difficulty on the fly, and your mom dispenses motherly advice. Because each citizen you recruit benefits you with more than their battle acumen alone, I felt much more inclined to go out and find as many of them as I could. 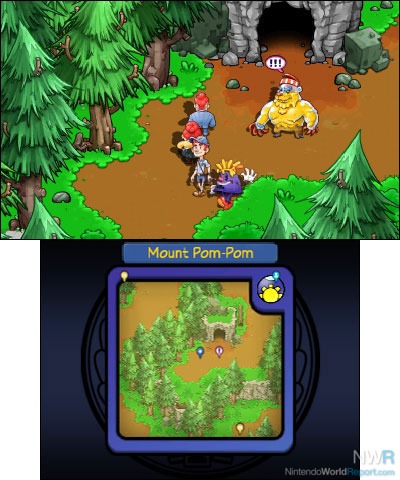 Most of the quests involve finding characters at specific locations and then aiding them in some manner. For the most part, it’s all fine and well, but the world is huge, making certain quests daunting to even begin. The map is often a pain to navigate, and it’s hard to find precise locations. You can gain access to a car service and a helicopter to ease the traveling pain, but it’s still tough to navigate. Luckily, aimless exploration is fun, especially when you fight the crazy enemies and uncover silly jokes and references, but the minute you have to go find exactly where a certain character is located, it can get tedious.

Compounding on the tedium are the rampant load times. Every single time you enter a location on the map, a loading screen comes up. While it only lasts a few seconds, it happens so frequently that it’s very annoying. Worse than that, the game regularly ran into glitches and crashed on me more than a couple times during my many hours of play. Thankfully, the constant auto-saving system more or less ensured I only lost a few minutes of play at most, but it was still annoying.

Even with the bugs, Citizens of Earth is an engrossing, fun RPG. Combat is easy to grasp but surprisingly deep, especially when you start getting items that boost your character’s abilities in interesting ways, whether it’s giving them an extra attack or making them a defensive powerhouse. The story and side-quests build to such goofy, ridiculous heights that part of the fun is just seeing where the dim-witted Vice President goes next. The stunted, load time-induced pace of Citizens of Earth is hard to tolerate at times, but the overall adventure, gameplay, and world make this RPG a worthwhile experience on 3DS.

I didn't know this was coming to the 3DS! I prefer my RPGs portable and lamented when I only saw the WiiU review. Now I'm psyched, I love Earthbound and this review just sold me the game.