The simplest way to sum up TooDX's debut Wii U eShop title, Sportsball, is that it's the classic arcade game Joust mixed with soccer and basketball. That quick elevator pitch doesn't take into account the kinetic action in every multiplayer match, though. It doesn't properly convey how patently ridiculous the '80s sports movie-esque soundtrack is. Paring down Sportsball as a Joust derivative doesn't do it justice, because Sportsball is likely the best multiplayer game on Wii U this side of Smash Bros.

Each match can feature anywhere from two to four players (local only) and takes place on a single screen. The objective is to guide your bird to tackle enemies from above (like Joust and Balloon Fight) and hit balls into goals to score points. Each of the birds on the four different teams is totally unique: they each have their own style, with larger ones being slower but more powerful, and smaller ones being nimble but weak. 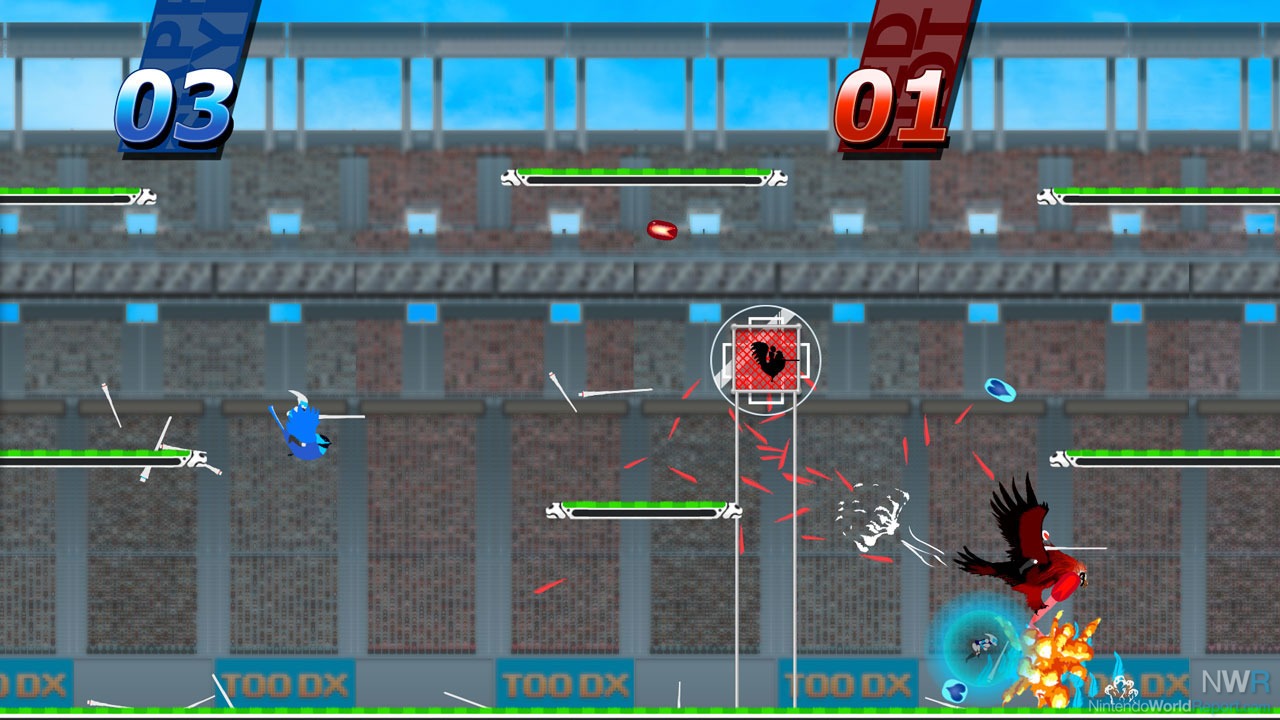 The style of each bird fits into the overall personality of the game. I'm not totally sure of the authorial intent, but Sportsball feels like it's a cheesy '80s sports movie that takes place in the future as foretold by those movies. It has an overwhelmingly bright color scheme and a spectacular soundtrack that brings out the ridiculousness of the whole concept. The colors do become a problem in some spots, as certain players are easy to lose in the color of the background of some of the stages.

There are several pre-made game variants, including timed matches, score thresholds, and one that’s based on tackling each other instead of scoring points. In addition, you can create a game variant of your own with a high degree of customization. It does feature a single-player mode where you try to score goals as quick as you can before time runs out. It's more of a high score mode where your mileage may vary.

While there is certainly a metagame and a high degree of strategy, Sportsball has a certain randomness charm that makes it even more frantic and fun. Try as you might, the balls don't always bounce the way you want them. So even if your Gigantoraptor is in the perfect position to defend the goal, that doesn't mean that you're guaranteed to shut the other team down. That chaos makes for a fantastic competitive experience that hits the right combination of luck and skill. It's one that can make a crowd cheer and jeer at a moment's notice.

Those cheers can be enhanced by a fun but undercooked feature. When others are playing, another person can pick up the GamePad and commentate on the match as it’s going on by using the built-in microphone. The mic isn't the best quality, so it comes out a little warbly, but it's an idea that's so goofy it works. The one downfall is that, even though you can save replays of any match, you can't save your commentary (you can see the commentary in action in the below video).

The heart of Sportsball is in local multiplayer, so if you can't wrangle together a few friends, it's not a game I'd recommend getting. But even if you have the sliver of a chance of having the people needed to play, Sportsball is well worth diving into. It's an incredible multiplayer game that takes a simple concept and transforms it into a deep, competitive experience.