New Super Luigi U is the new DLC for New Super Mario Bros. U, the latest entry in a series of which many (including myself) have started to grow extremely weary. With a new pack of levels that initially seems to do little more than make Luigi the main character, it would be completely understandable to pass on the conception that this is just more of the same 2D Mario gameplay. Thankfully, the DLC is quite a bit more than that.

Outside of featuring new levels, the largest change to the game is the addition of Luigi as the main character. Luigi is significantly different this time around, as he regains his improved jumping and fluttering abilities of Super Mario Bros. 2. He can jump significantly higher than his older brother, as well as significantly farther. Thankfully, this isn’t just for nostalgia’s sake. The new levels are built with Luigi's characteristics in mind; certain long jumps are made for Luigi to easily overcome, and his ability to momentarily flutter in the air can be used to do things like briefly delay landing on a platform. Most importantly, Luigi does not feel nearly as unwieldy as you might expect, and the improved leaping capabilities actually make Mario seem limited (and less fun) in comparison. 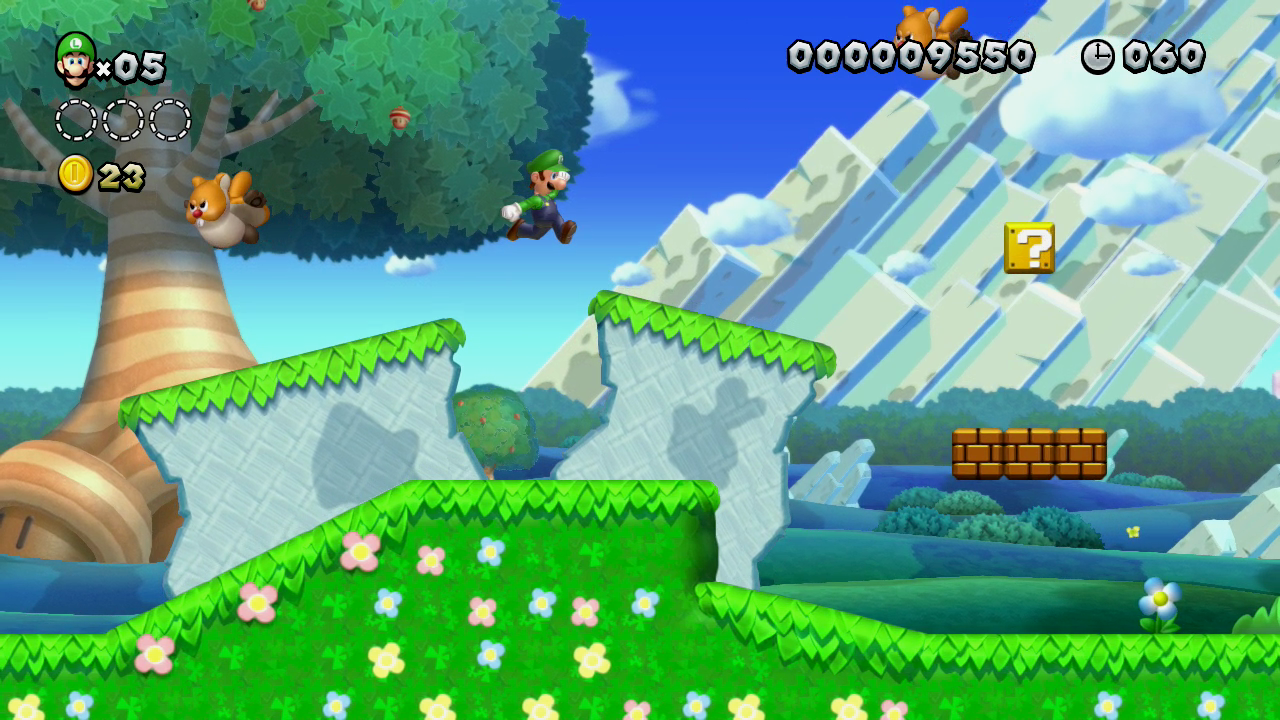 Nabbit, the character you had to chase down for P-Wings in the last game, is also playable in four-player mode (and single-player mode by holding ZL on the GamePad while you press A to start a level). His physics are similar to Luigi's (complete with the same high jump), but he is different in that he can't get power-ups (he instead collects them and turns them into 1-Ups at the end of a level), and he is completely invincible to enemies. When he does get hit, he only flashes and gets pushed back momentarily, making the final Bowser level effectively impossible to lose in single-player. Simply re-using Nabbit from the original game instead of using a new character is a bit lazy, but the implementation is a clever way for newcomers to play the new content in multiplayer without feeling overwhelmed.

The new downloadable content features over 80 new levels of New Super Mario Bros. U-style gameplay over the same world map. Each level has a strict 100 second timer with pretty much no way to extend that time (outside of time gained when entering boss doors). This means that you will be moving at a faster pace, but the more important consequence of this new timer is that levels are much shorter than they normally are in a NSMB game.

And yet, the levels that you do get are more condensed, more hectic, more difficult and more exciting than anything you're used to in the regular titles. Projectiles and hazards are tossed out generously, and finding more enemies than you might be used to in a small area is commonplace. And for the few levels you might not like (I never enjoy ghost houses or underwater levels), each level is so brief that they can be shrugged off. Beyond that, the short levels combined with the timer pushing you forward and the plentiful obstacles actually make the pacing somewhat comparable to the Bit.Trip Runner series, including the same exhilarating feeling you get when you pass a tough level in one try. 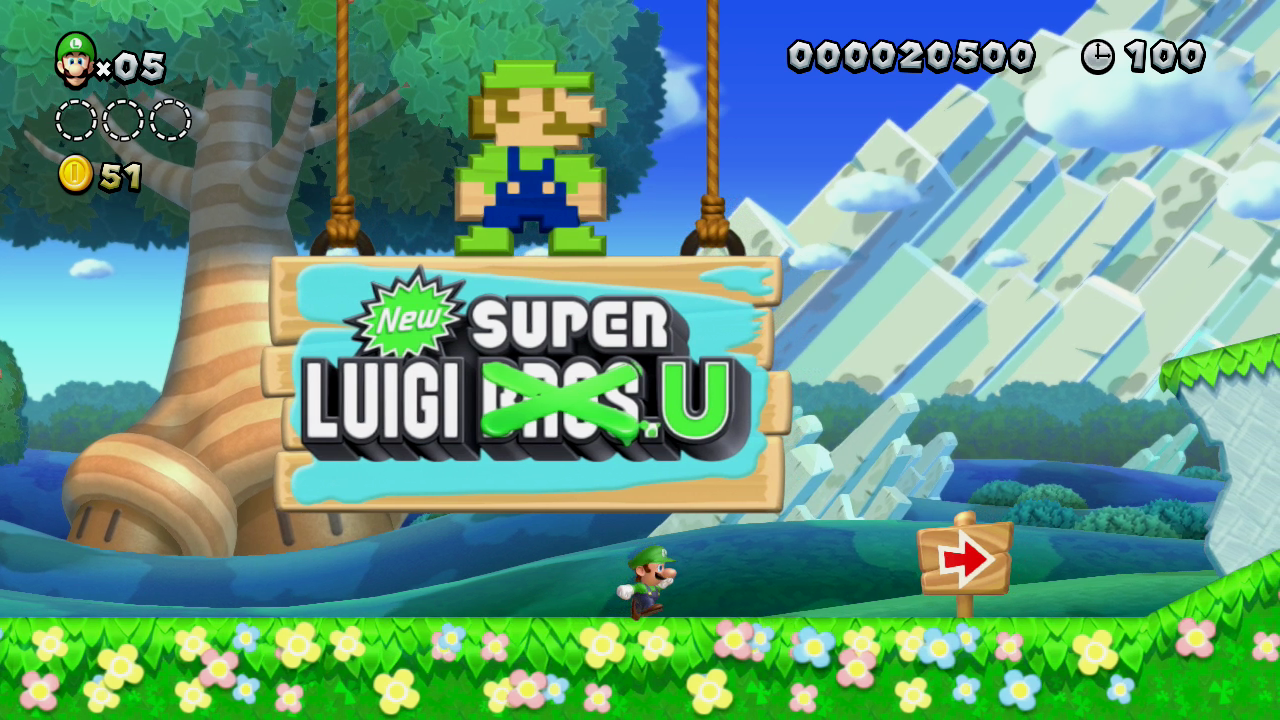 Each level still presents something that only the Tezuka-produced team could make, and the levels feel as masterful, unique, and fun as Mario levels always have. One ice level places you on the same slippery surfaces you've been on hundreds of times before, but throws in a series of fire-breathing piranha plants to keep you constantly moving forward and dodging. Another level features a tower of broozer ghosts that attack you while one of your only methods of platforming are the spinning stars from the Spinning-Star Sky level in the original game. As you might have guessed, there are few new assets in the game, but the developers tried to make up for it by repurposing these assets in unique ways (like new levels that focus on the once-unlockable Penguin Suit).

However, this is also where New Super Luigi U does kind of feel a bit like a level hack. With very few new assets, practically identical bosses, a practically identical story, entirely identical music (though that is nothing new), identical power-ups, and an identical world map, it is hard not to be disappointed that Nintendo released downloadable content with so much effort put into its uniqueness, but decided against adding much of anything that is actually new outside of the characters and level design. A new world map, more new enemy types, new bosses, some substantial new art, a brand-new power-up immediately available, or even some original music tracks would have done wonders to separate the title from its Mario-centric counterpart and feel especially original.

Regardless of any disappointment I feel in what isn't there or what should be more plentiful, it's hard to dislike New Super Luigi U. With Luigi being fun to use, the level design being fresh and clever, and the increased difficulty offering an exciting twist on Mario gameplay, New Super Luigi U makes for a package that feels more like a full expansion pack than just another piece of DLC.

Huh, I'd wondered what they were going to do about the bosses, unfortunately not too surprising.

Do the levels have Star Coins/Star Road unlocks? Also, are all the secret level paths the same?

Huh, I'd wondered what they were going to do about the bosses, unfortunately not too surprising.

Do the levels have Star Coins/Star Road unlocks? Also, are all the secret level paths the same?

I played a few levels of this at my sister's house the other day...

It is more NSMB.

Glad to hear this holds up. Thanks for the review, Alex! I plan to download it tonight.

So far I like the expansion a lot, levels are tough and fun, even thou the reviewer didn't like the re-used assets, I still think Nintendo put great effort in many levels to differentiate from the NSMBU levels.

One of my favorite things about the Luigi DLC are the pictures and statues of Luigi hidden in every level. Not only am I looking for the 3 star coins in every level, but now all the hidden Luigi Content they threw into the game!

This game just keeps growing on me.  I actually just beat it this morning.  There is a cool feature added after you beat the game.  When you enter a level, there is a red box with a Mario "M" on it.  If you hit that block it changes Luigi's physics to Mario's for that level.  Basically, you're Mario with a Luigi skin.  I guess this would come in handy if there's a difficult Star Coin, and you'd be more comfortable using Mario's physics to reach it.

Beat the game months ago and recently went back to try out Luigi U; while it doe essentially feel like "more NSMB" I. Honestly say that even within the first few levels, the game has a very different feel to it because of not only Luigi's physics bit the timer as well. Perhaps I'm just not used to Luigi yet but the game feels more difficult this time around and I like that. The shortened time I'd also effective in that you may end up missing a star coin because you'd rather race to the finish.

I thought I was burnt out on NSMB but I was wrong. I need to stop letting the internet affect my opinion.