Do the Monster Hunter Mash.

Monster Hunter 3 Ultimate is the follow-up to Monster Hunter Tri, which was released in 2009 on the Nintendo Wii. This version offers more monsters and quests, and players can experience it on the Wii U, 3DS, or both, with the game’s support of cross-platform play. With six wholly different environments, scores of monsters, and a bigger weapon selection than before, does MH3U bring the goods, or is it just a rehash of Tri.

The premise of the game is a simple one: as the new hotshot monster hunter in town (or village), it’s your duty to protect the villagers from the nasty creatures outside their walls. Granted, MH3U doesn’t feature anything resembling a good story, but that shouldn’t stop you from having one hell of a time hunting some of the scariest and most badass monsters you have ever seen.

Most of the major monster hunting takes place in quests. With around 200 quests, the game easily allows for dozens of hours of gameplay. Quests’ objectives range from collecting mushrooms to slaying a certain number of smaller monsters or truly terrifying beasts. Although Tri fans will notice a lot of the same quests from the first release, Ultimate adds plenty of new adventures even seasoned hunters can enjoy. The game also creates reasons to replay quests, whether it’s to obtain a certain item, to hone your new weapon, or simply to get in more practice against a certain enemy. More likely than not, you’ll often have to head back to each area to get a certain item for your brand-new armor or weapon set. 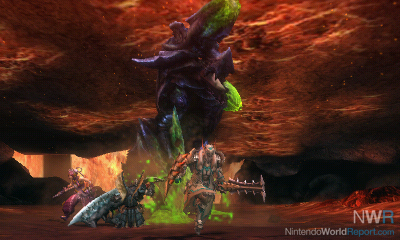 To complement its action gameplay, MH3U includes an intricate and engrossing crafting system. You can choose from 12 different weapon types with advantages and disadvantages, including speed and defensive capabilities. Each weapon type includes several base weapons players can upgrade into at least four other weapons, allowing hunters to experiment until they find their perfect weapon. Pieces of defeated monsters, as well as bugs, ores, and metals are usually required to upgrade a weapon. Though somewhat tedious, collecting materials and upgrading weapons is effective in keeping you invested in and moving along the game’s progression path.

Weapons aren’t the only things that make you a better hunter. The game creates and puts you in situations that require you to learn and adapt, and gain real experience in the process. Traditional RPGs offer a basic level-up structure and mentality, but MH3U reflects your progress with each behemoth you take down on your own. After the first encounter with a Great Jaggi (one of the game’s first bosses), most players would feel winded. But after a few more bouts with the monster and a weapon upgrade or two, the experience can become little more than a nuisance, and much more rewarding.

The control scheme for the 3DS version is great, and only takes the extent of the game’s intro to get used to. Albeit long, these intro stages are also a great way for new hunters to get acquainted with the world. By the time hunters depart for their first hunt, the controls feel much more natural. MH3U even offers a variety of different control options if the default doesn’t suit players. Attacking, dodging, and running are all controlled easily, which makes getting into the experience that much smoother. 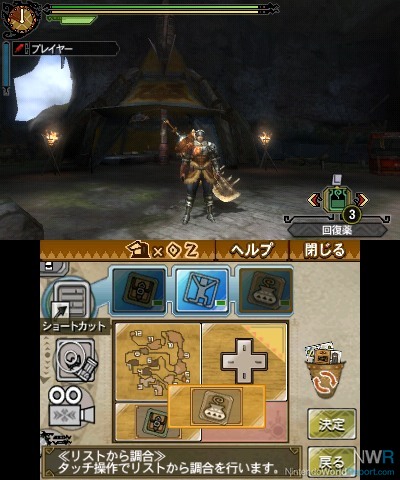 With a plethora of monsters and a gaggle of characters, the game makes a point to give everyone and everything its own personality. The game’s music also creates an engrossing atmosphere you can really lose yourself in. The battle music is exciting, the exploration music is beautiful, and the village music is just quirky enough to make you smile. The graphics, on the other hand, are only all right. The monsters look amazing, as expected, but everything else looks a little simple in comparison.  Some of the character models, in particular, are a little rough. It’s not a major detraction from playing Ultimate, but it’s just hard not to notice after fighting a beautifully rendered monster.

At some points in Ultimate, playing solo just isn’t enough. Granted, two AI companions are available to help (one companion is new to the series), but more often then not they get devoured in the first 30 seconds of an encounter. Even with your seemingly immortal companions, hunting with friends is better. Local multiplayer is a blast, allowing players to hunt and fight side-by-side virtually and physically. When players are able to complete a mission together the feeling of joy is almost overwhelming. 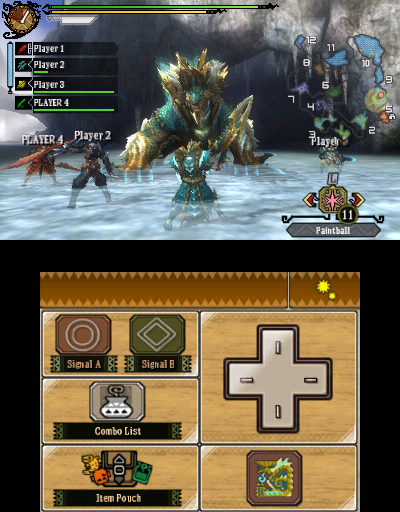 As everything Tri was and more, Ultimate in its portable form is a must-have, at least for Monster Hunter fans. Being able to bring the game’s immersive world with you where ever you go is a truly incredible experience. Whether you’re looking for another Carpenterbug or hunting down the mighty Lagiacrus, MH3U brings an impressive amount of content, challenge, and fun to the 3DS. 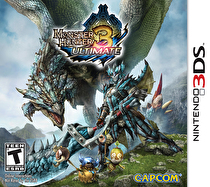