This eShop cooking simulator is well-seasoned and ready to serve.

Order Up from Supervillain Studios has had a long road to release on the 3DS eShop in North America. The game, originally a Wii exclusive, released on 3DS in Europe late last year via store shelves, and hit other platforms such has PlayStation 3 and iOS a few months ago. Now that the game has finally released in North America, has it been worth the wait? The answer, largely, is yes. 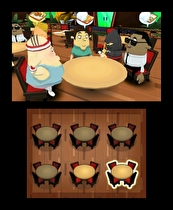 Order Up plays mainly as a cooking simulator, with some basic restaurant maintenance thrown in as well. Each recipe in the game has four components, which require use of the fryer, grill, cutting board, etc. As the chef, you tackle them one at a time, using stylus gestures on the touch screen to execute the cooking. Once all the recipes on your order ticket are done, you send it out into the restaurant and collect your tip based on how warm each dish is, and how well you performed the actual act of cooking.

There are five restaurants to cook at (not including the fast food joint in the tutorial), each more lucrative than the last. Although the dishes change at each restaurant, the gameplay remains the same from beginning to end: move the stylus on the touch screen to manipulate ingredients in order to make the perfect recipe. It’s a fun mechanic, but by the time you’re preparing gourmet dishes in the final restaurant, it feels far more like busywork. Luckily, you can hire assistant chefs to help relieve some of the burden. By the time you reach the later areas of the game, making sure you have the right help in the kitchen is among the more important strategic choices you can make. 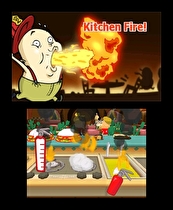 The controls feel slightly laggy, with gestures sometimes requiring a few attempts to get them right. It can sometimes take too long to zoom in and out to the countertop, meaning you occasionally perform your stylus gesture a bit too early. It’s a timing you quickly grow accustomed to, but it can be a bit frustrating. Once you have the timing down, however, the gestures do feel rewarding when you get them just right, particularly with flipping things on the grill and chopping vegetables.

Aside from cooking food, there are several mini-games, which boil down to flicking or rubbing the screen with the stylus. Sometimes you’re putting out fires in the kitchen by holding the fire extinguisher over the fiery areas, and sometimes you’re flicking rats off the counter by touching them with the stylus. None of these mini games are even remotely challenging, and it makes you wonder why they’re there at all. They break up the action, but the rewards are usually nominal and the challenge virtually nonexistent.

The game features a fair amount of voice acting, all of which lends it a considerable amount of charm.  Most of the repeat customers you see in the restaurant have some sort of special characteristics, which come through in their appearance and voice. These characters have special requests for their food (e.g., extra salty, well done, spicy), and accommodating them lands you a larger tip. Along with the voices, the art design in the game feels well thought out and helps give the entire Order Up!! experience a unique flavor. All the restaurants you cook in are unique and nicely decorated. 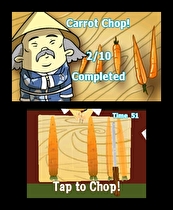 The game doesn’t feature any sort of multiplayer or online mode, which is unfortunate. A time-attack mode for a day in the restaurant or for specific dishes, with online leaderboards, could have added a tremendous amount of replay value. The game does feature stereoscopic 3D visuals, but they’re not anything special; it feels like they were added toward the end. The neatest 3D effect in the game comes when using the spoon (which sticks out toward you) to stir things on the stove.

Order Up is a fun diversion, and well worth checking out on the eShop. The game has benefited from the wide distribution and lower price point of digital distribution via Nintendo’s online store. If chopping up some onions to throw into a soup sounds like a good way to spend your time, this is absolutely the game for you.