This puzzle-platformer is mighty fine.

The third in WayForward’s ongoing “Mighty” series, Mighty Switch Force (“MSF”) is the first developed specifically for the 3DS, and might be the best. Unlike Mighty Flip Champs or Mighty Milky Way, MSF focuses more on the action side of things than the puzzles, although that aspect is certainly still present. More than straight-up puzzles, MSF tests your reflexes and logic skills, asking you to find the quickest path to victory. Though short, MSF is incredibly slick and has great replay value. I can’t recommend it highly enough.

You play as Patricia Wagon, a robotic cop—or at least, an armor-clad cop—tasked with sniffing out the recently escaped Hooligan Sisters, a group of five cartoony blondes who’ve broken out of the slammer. The Sisters don’t put up a fight; you just have to find each one in every level before cheesing it over to your robotic buddy to escape to the next area. Patricia has a gun, which can destroy some blocks and enemies, as well as the ability to make certain blocks fade in or out of the background, allowing traversal through each area. This is where the puzzle element comes in. 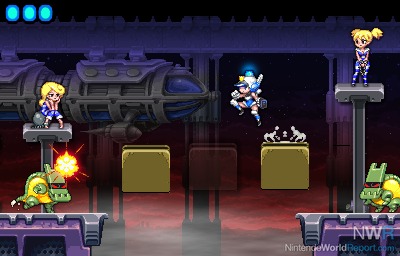 You’ll often be switching blocks (with the A or R buttons) while in mid-jump, and some blocks act like barrel canons, firing Patricia to a predetermined position. Some levels even have you switching blocks during flight! Trickier types of blocks can be toggled between being a foreground or background element when Patricia activates the switch. Each level brings something new to the table, and including the manipulation of certain enemies to blow up blocks or activate doors.

Each level has a goal time that, in theory, the player can complete the level under. Some of these goal times are downright evil, but things do get a little easier once you beat the game and are able to upgrade Patricia’s gun. Even so, the core mechanic of hunting down the Hooligan Sisters as fastidiously as possible remains compelling and, at times, shockingly difficult (I hate you, barrel block stages). Sadly, there are a scant 16 levels, although going back through each one to try and beat the goal time provides plenty of replay value. The only real downside is that there’s no tangible reward for doing so: Patricia’s end-game picture just appears on the title screen. I’d hoped for a different character sprite. Online leaderboards would’ve been amazing, too. 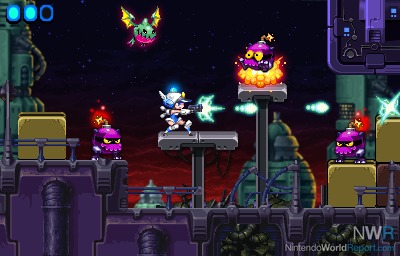 The game looks unbelievably good. WayForward continues to be the king of the 2D sprite-based platformer, with big beautiful sprites that animate fluidly and, and detailed backgrounds that add atmosphere to this futuristic game. The music is similarly fantastic (and downloadable: http://virt.bandcamp.com/) and will keep you going throughout this sometimes-tricky game. The 3D effect is put to excellent use and is similar to how it worked in the Kirby’s Adventure 3D Classic.

So despite its brevity and frustrating par times, MSF is one of the best games in the eShop library, and a pleasant surprise at the end of 2011.

I'm still wary of WayForward games, they always review highly but I don't find them that great.

I'm still wary of WayForward games, they always review highly but I don't find them that great.

I didn't think Mighty Flip Champs or Mighty Milky Way deserved the praise they got, but this game is phenomenal. This game is more straightforward, and feels a lot more polished to me. My only complaint is how short it is; what's there is brilliant.

I really hope downloadable level packs are coming  for cheap . I really like it so far the 3d looks great.


What 5 layers of depth?

Agh. I need to get more games for my 3ds already!

I downloaded Mighty Switch Force and Metroid II at the same time, expecting to play Metroid II way more than MSF. After giving them both a shot, I find myself almost never playing Metroid and playing MSF all the freakin' time! The gameplay is so simple and addictive, and the puzzles are brilliant!

I have never played this game personally, but from what I have read and heard it seems to me that Wayforward hould do the next 2D Metroid game for the 3DS and even a remake of Metroid 2 for the eShop (with a map on the bottom screen).

I wish I had more money. I have to add more to my eShop account. (I'm a penny short on getting this...)

I wish I had more money. I have to add more to my eShop account. (I'm a penny short on getting this...)

Thanks to the recent update, you can just add that penny in order to buy it if you're doing it with a credit card.

Oh my word, why didn't I start playing this game before?
Just started it last night. Its been sitting on my system since the summer discount.

What a fantastic game. I'm on level 6. I haven't come anywhere near any par times but I have replayed several of the first 5 levels to imrpove my personal time. I have cut all of my first play through times about in half.

But I just like the creativity in level design. And the music and graphics are great. I really loved Mighty Milky Way too so I am happy to see some of the same music and sound cues return, slightly remixed. Maybe this is consistent thoughout the "Mighty" series?

WayForward has managed to achive that Nintendo-like difficulty balance with this game so far. You can choose to play it (as I am) just for the puzzles and to beat your personal time. Or you can go for the inherent "hard mode" of beating the par times. It is a simpe idea that instantly creates difficulty balance that embraces both excellent players (like Halbred) and not so excellent payers (like me...or Kairon ;) )

Really liking it so far.