And London was never the same again...

Despite the mixed reviews the game got when it was released in 2007, I loved the hell out of Mario and Sonic at the Olympic Games. The allure of seeing my two childhood icons appearing together, as well as the fun (if devastatingly tiring) mini-games made it one of the most played games at my household. The 2009 sequel—Mario and the Sonic at the Olympic Winter Games—improved on the first game greatly, implementing new technology and providing a very high caliber presentation. Now, with the Wii seemingly entering its last holiday season, Mario and Sonic return once again to compete at the London 2012 Olympics, and while the game continues the quality presentation and content seen in Winter Games, I can't help but feel that it goes neither forward or backward.

The best way to describe London 2012 is as almost a remake of the very first Olympic game with many elements from Winter Olympic thrown in for good measure. Like the first two, the object of the game is to play as Mario and Sonic characters through various real world Olympic events (100m Dash, Synchronized Swimming, Equestrian, etc.) and locales inspired by next year's Olympic venue, London. The gameplay design borrows heavily from the Track and Field series, relying a lot on button mashing and timing in order to represent the highly competitive nature of the event. For the most part, London 2012 has not changed that concept at all, which rings as slightly disappointing to me. Winter Olympics also kept the basics, but experimented with it a little more thanks to the inclusion of the Wii Balance Board. Not only does London 2012 omit the Balance Board, it also forgoes the usage of MotionPlus, making the game feel like it is stuck in 2007.

As I just explained, the controls rely a lot on timing for the concepts to be brought to video game form, except instead of constant button mashing, you shake the Wii Remote vigorously. The game does try to add some strategy to this by having players properly shake the Wii Remote in rhythm in the case of some of the gymnastic and aquatic events. Still, this control method may be too simplistic for some, and some of the controls tend to get very repetitive. In my experience, some of the events, such as disc throwing, requiring tilting the Wii Remote were the hardest to play, due to the game poorly registering the movements of the controller, creating an exercise in frustration and requiring more effort than needed. 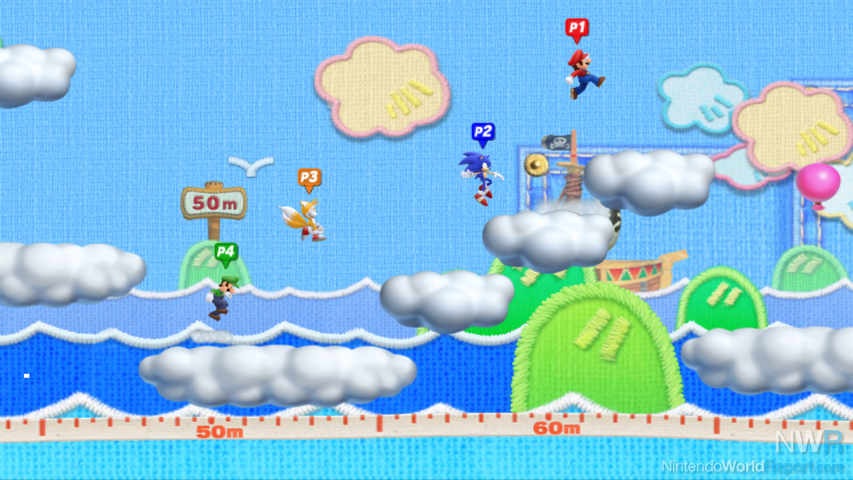 In addition to the regular Olympic events, there are also Dream Events, which add an arcade makeover to the existing activities. Not only are these the most creative events gameplay-wise, they are also brimming with lots of personality thanks to the inspiration taken from the Mario and Sonic games. Unfortunately, these events suffer from the same control issues that plague the main events. Fortunately all of the events are unlocked from the start, eliminating the need to unlock each one by replaying the existing games over and over again.

Hoping to extend the game's replay value beyond the included events, Sega has also implemented London Party, a Mario Party-like mode where up to four players can compete in a board game with mini-games (both exclusive to this mode as well as the events seen in the main game) thrown in for good measure. The objective is to be the first player to fill his or her sticker sheet. It's a mode that goes by very quickly, but does offer a fun alternative to the main game, and gives players even more mini-games to partake in.

Another gameplay extension featured in London 2012 Olympics is the scratch cards. Every time a player completes a mini-game, they get a card where they scratch off the circles in hopes of matching two of them. If they match up, a musical track or Mii costume piece is unlocked. If this proves to be too tedious, and players don't want to leave it all to luck—they can use the leftover blank cards to buy the unlockable items. In If there's one thing you can't accuse the game of, it’s slacking off when it comes to extra content and gameplay modes. 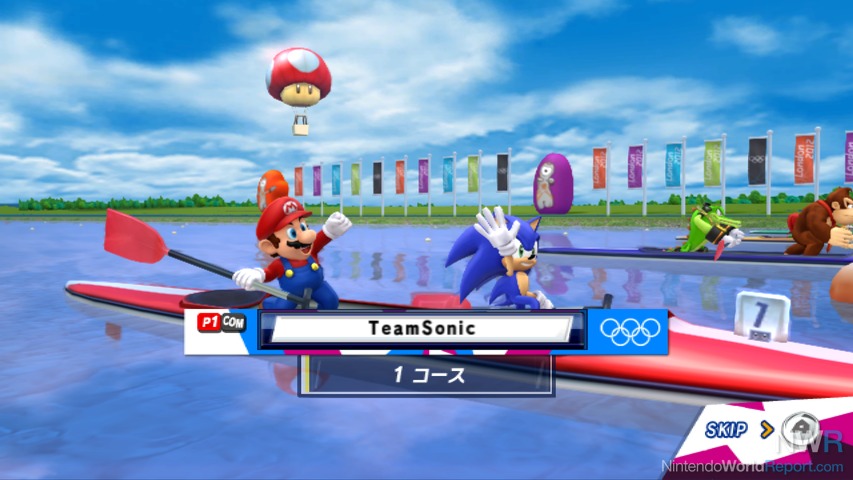 One of the things I loved most about Winter Olympics was the overall presentation. I am very happy to say that London 2012 keeps that tradition alive. Despite a graphical issues (such as blurry sprites that simulate a big audience), the game dazzles with color and detail. From the official venues to the Yoshi's Story-inspired Dream Event, there is a lot to captivate players. The same can be said about the musical score, which is once again very epic and creates a feeling of triumphance. Despite the high fidelity of the soundtrack, though, the character voices do tend to repeat often.

On the whole, Mario and Sonic at the London 2012 Olympics is a game that seems to both progress the series while keeping it firmly in the roots established by its 2007 predecessor. The motion controls fail to give a groundbreaking presence amongst its many party game brethren on the Wii, and many of the events featured here already made appearances in the other games. But the amount of content crammed into the disc makes this a game worth trying if you enjoyed previous entries in the series. If you thought the other games were lackluster in their design, London 2012 will do nothing to change that perception.


What does the Wi-Fi features in this game do? Leader boards?

its sad the motion controls stink, but the worst part is the controls are irrelevant because casual gamers will play it regardless. I'm sorry but no excuse to why this isn't motion plus exclusive