Mario and Sonic are ready to compete once again.

At a recent Sega event I had the chance to play the Wii version of Mario & Sonic at the London 2012 Olympic Games. I had quite a bit of fun trying out the new mini-games, and was impressed by how inventive some of the Dream Events are in the upcoming title.  Here's a breakdown of each mini-game along with my thoughts. 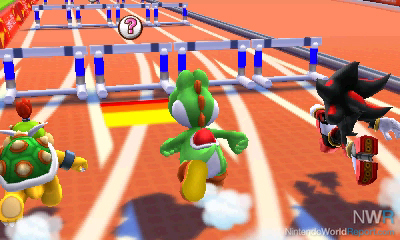 Dream Hurdles: I don’t think I would have ever imagined seeing Metal Sonic doing hurdles on Battlerock Galaxy from Super Mario Galaxy, but that's exactly what I witnessed. This game of hurdles is quite intense, much more than just running and jumping on a straightaway track. In this case the circular track is spinning and will sometimes even reverse direction. You must carefully traverse the track while also avoiding being jumped on by the other competitors.  To make things even more hectic, there are power-ups the players can get such as Starmen. This event is quite fun and has the potential to be a multiplayer favorite.

Dream Equestrian: This was my favorite mini-game of the ones I played. The setting for this contest is Moo Moo Meadows from Mario Kart Wii, and in it the participants are riding on horses dragging a cart of Yoshi eggs. The Wii Remote is held NES-style and you steer by tilting it left and right. You have to be very careful around turns, or a Yoshi egg will fall out and be destroyed. Enemies on this level include multiple Monty Moles, and at one point you are chased by a giant Chain Chomp. If you successfully make it to the end of the racetrack, the Yoshi eggs hatch.

Dream Long Jump: This is another level with a strong Yoshi theme. Players are transported to a 2D side-scrolling level from Yoshi’s Story and must survive for as long as possible by jumping on clouds. Players can bump into their competitors and try to make them fall to their doom. Some clouds are electrified and occasionally a Banzai Bill will come flying by to make things more difficult. Players will also be able to butt-stomp some clouds to make them break up into tinier clouds. I was told that if you can survive for a really long time you will encounter even more obstacles and some ultra-insane cloud platforming. This game doesn’t resemble normal Long Jump at all, but it is quite enjoyable. 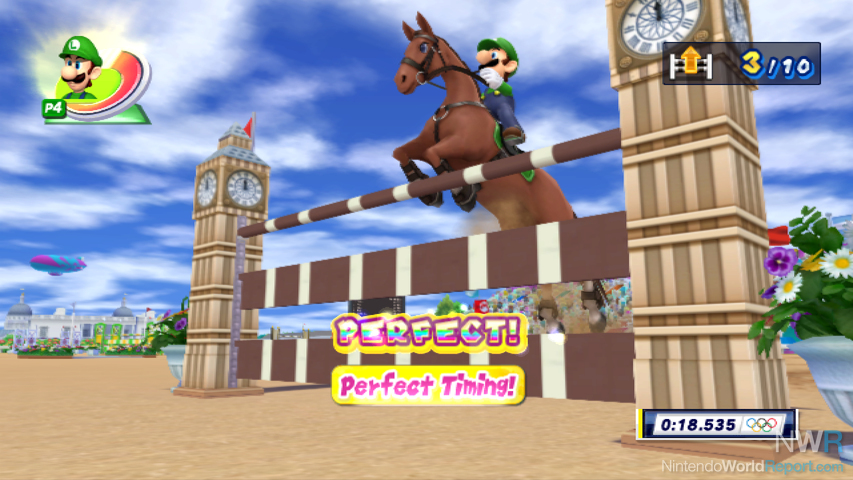 Football: Don’t get confused by the name; this is what folks in North America call soccer. This mini-game could almost be described as Mario Strikers Lite. You use the Nunchuk and Wii Remote to control all the action. Just as in Mario Strikers Charged, players can use a super move which will make the ball fly towards the goal with a great deal of extra force (don’t expect the awesome animations that you get in Mario Strikers, though).

Shooting: It’s a strange sight to see Mario brandishing a pistol, but that’s exactly what you get in this event. In this mini-game there are multiple targets the player must hit in a very short amount of time, with only one bullet for each target. This game is all about earning the most points, and hitting the center bulls-eye is the best way to do it. When you compete, there are multiple rounds and the targets will appear in different places and sometimes spin and move. To aim you use the Wii Remote’s IR and press the B trigger to shoot; the game’s producer compared the shooting mini-game to the old arcade title Police Trainer. This mini-game certainly provides simple fun, but you’ve probably had a similar experience in Wii Play or countless other mini-game collections on Wii.

The first two Olympic collaborations between Mario and Sonic were fun multiplayer experiences and it appears that this new title set in London will be as well. I have feeling I will be attempting to get gold yet again when the game is released on November 15.

I know where I'm taking my next vacation.