I'm not exactly sure they know what overclocked means.

Shin Megami Tensei: Devil Survivor Overclocked is a port of the 2009 DS non-Overclocked game. It tells the story of three teens trapped in Tokyo during a less-than-natural disaster. It features the kind of deep gameplay the series is known for, and has a lot going for it. But, there’s something not quite right.

At its heart, Devil Survivor is a tactical RPG featuring a battle grid, parties, miles of customization, and a turn-based combat system. It has all the trappings that come standard with such a title: elemental rock-paper-scissors, status effects, movement limits, and pages of stats that only the most die-hard fans will ever pay any mind. 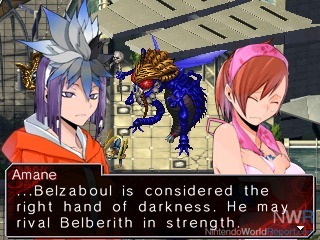 Battles are simple affairs, usually amounting to nothing more than being the last one standing, and there are quite a lot of them – with an entire new set added for this port. There are a few missions with additional objectives, such as destroying an object or rescuing bystanders.

The tactical decisions come in selecting the right mix of demons for the situation, be it a need for a potent healer or a demon that allows the party to move over the grid more quickly. There is some pleasure in figuring out which demons to acquire via auction or produce via the merging of two existing demons. The battles themselves are rewarding if slightly repetitive, as long as they are not the rescue/escort style, which are tedious as a rule.

It’s not hard to see how demon acquisition could become a bit of an addiction for stat-heads. The demon auction pits you against a cadre of other demon tamers you need to browbeat into dropping out of the bidding with showy displays of cash. Of course, you can buy any demon without going through the auction – at risk of overpaying – but what’s the fun in that? Once you have a shiny new enemy-turned-ally you can teach them new moves and boost their stats. Once they lose their new-demon smell the merging system lets you pick from the movesets of the two creatures you added to the mix when creating a brand new demon. Experimentation really is the name of the game. It is hard to anticipate what will become of any mix. The game shows you the end result before the merger, but that’s just numbers. Until you get the new demon in battle you don’t really know. This is the most rewarding part of the game, which is good, since you’ll be spending plenty of time in it in order to beat the game. 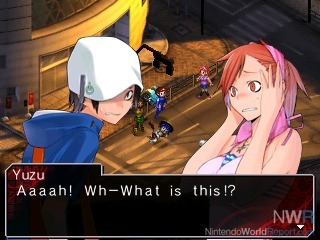 While the gameplay has survived the port well, the presentation hasn’t. The visuals are pathetic. The original Devil Survivor on the DS did not look great by standards of the system; many of the battle stage sprites looked as if they would be right at home in a Mega Man Battle Network title back in the GBA era and the static images of monsters during combat are right out the Super Nintendo. With the exception of the hand-drawn story segments, there was little of note. Pedestrian visuals aside, the game took place primarily on the bottom screen.

When dealing with such primitive visuals the correct course of action would have been to replace them with something more befitting the 3DS. They could have created new sprite work. They could have recreated the hand-drawn assets (which do look nice and convey the story well) to migrate them to the top screen’s new aspect ratio. Atlus could have done a great many things to make the Overclocked version of Devil Survivor match its badge. They didn’t 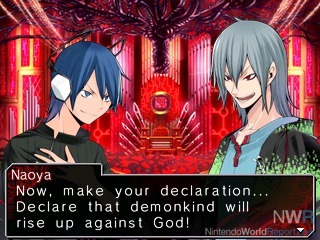 Note the mostly square shape of this image

Instead, Atlus left the dull combat graphics in place and simply decided to put either a static background - or even more apocalyptically, nothing at all – on the top screen. The lack of effort in improving the visuals is astounding. While they aren’t the most important element of a game, these prove to be distractingly poor, and show a near total disregard for the 3D effect (there are a few minor moments in the game).

Atlus did make a major effort of improving the audio quality of the game. This port is now fully voice-acted. To me, this is the most major improvement the title received. There is a great deal of text, delivered by a competent group of voice actors. While a nice addition to the presentation in its own right, the voice work helps move the story and allows the delightfully perplexing plot to be more readily approached.

Blissfully odd and intriguingly subversive, Devil Survivor’s story deals with an outbreak of demons within the confines of Tokyo. To contain the carnage the government sealed the entire area and has made providing as little information to the ensnared population as possible a top priority. Devil Survivor provides an interesting, and to be quite honest, timely, depiction of Japanese society during a disaster. As the days roll on, trust in the government, and its story, plummets and the composure of the people you meet throughout the game falls steadily. 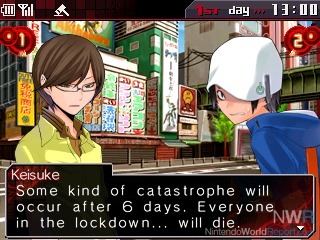 I detect a lack of trust

Shin Megami Tensei: Devil Survivor Overclocked manages to get almost everything right. The combat system is mostly good, and there is quite a lot of it to consume. The amount of party customization is limitless. The story is twisted, and the full voice acting improves the overall delivery. There is one major problem with Devil Survivor Overclocked: it isn’t a 3DS game. The differences between Overclocked and its DS forbearer are minute, and the ones that actually matter are not things that required the hardware upgrade brought by the 3DS.  Even when the game is at its best there is no escaping the nagging feeling that this is a DS game. Atlus has already released a Devil Survivor sequel in Japan. While it too is a DS game, it is on the DS. Wait for that one; it has more content and you’ll be playing it on the right system.

I want this game ever so badly (it's sold out everywhere here and is on back order at a lot of places online probably due to low allocation), but it's sad to see such potential unfulfilled.


I'm still getting get it though because I love my srpgs and have never played a shin megaten game.

I can't say that you're making a bad decision. Look at the score, it's a solid game.


You just can't market this as as 3DS game. In that respect it is inexcusable.

Good review, James. Just wanted to thank you for posting it. You guys probably don't get enough of that kind of feedback.
The score is more generous that I was expecting considering this seems like a cash-in port to me. But I gather (from the review) that the underlying game is solid enough.

I am still on hiatues from jusr scatching the surface of Persona 3 (PSP) so if I ever get aorund to picking that up again and loving it (I like it so far) I may consider picking this up sometime. But no time soon. 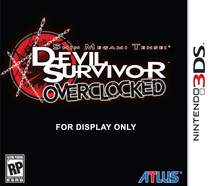