For a free applet, this little trinket comes choc full of useful features and information, making it a worthy download for Poké-fanatics. In this package is a comprehensive list of every Pokémon from the latest Black and White games, a rotatable 3D model of each with its own animation sequence, and a list of stats.

Scrolling down each page shows the Pokédex base stats for the Pokémon's HP, Attack, Defense and so forth, height and weight, the description entries from both Black and White versions, any abilities with descriptions, evolutions, the egg group for breeding, and a complete list of all attacks that it can learn and be taught, with their own type and stats. Seriously, this thing puts many official player's guides to shame. The entries can be sorted by name and number, the stats can be customized and sorted, and you can even register your favorite Pokémon onto a bookmark list for easy access.

But the main attraction is the models themselves, shown in glorious 3D upon a stage and backdrop, which can be customized in the settings.

The Pokédex is not complete when first downloaded. It comes pre-loaded with 16 Pokémon. From there, new Pokémon can be added through SpotPass, the most common method, trading with a friend, or using "AR Markers".

Activating SpotPass means that the Pokédex will download and add up to three new random monsters to the list every day. It can take a long time to collect all the Pokémon this way, but it does extend the length of the experience somewhat and gives you a reason to check back on the app after the initial download. However, the blue SpotPass dot only appears on the game's icon once per day, even though it gives you three separate entries. For reasons unknown, you must hit the home button and re-enter the app twice to collect all three.

To transfer Pokémon to and from friends via local wireless transfer, the options menu has simple Get/Send buttons.

Finally, you can scan a Pokémon's AR Marker, which is a little symbol similar to the QR codes used by Miis. Scanning an AR Marker for a Pokémon you already have will add that Pokémon's entry into a chart called the AR Sticker Album. If you attempt to scan in an AR Marker for a Pokémon that you don't already have, it will show up as a black silhouette, and you'll get a black shadowed sticker in the album. For each of these shadow stickers, there is an increased chance of receiving that Pokémon through SpotPass, but it doesn't guarantee you'll get it next, it just boosts the odds a little.

Things get confusing when it comes to finding AR Markers. You only get the Marker for a Pokémon when it is added to your Pokédex. The only way to see new ones seems to be looking them up on the Internet. There's no official website with this information, so this gives an odd feeling of cheating. This process is a little annoying, since it is confusing at first to figure out how to use the AR Markers for collecting and the manual explicitly skips certain topics that should have been obvious questions

One of the main functions of the app is the AR Viewer, which makes use of these Markers. You can either print them out or draw them yourself. The former option is a little difficult, as it's not possible to print from the 3DS, and there is no way to extract the marker from the SD card either. Regardless, once you have one of the markers on a piece of paper, the 3DS camera will show the monsters appearing on your desk with augmented reality, much like the AR Games cards. From here, you can throw food at them, take photos of them, or position the markers at different angles for different poses. Taking photos of a Pokémon adds it to another chart, the Photo Sticker Album. 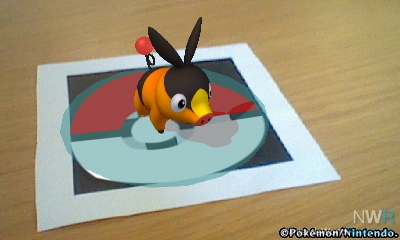 Adding more Pokémon to the AR Sticker and Photo Sticker charts will unlock new features, such as a button to hear the Pokémon's voice, add custom backdrops, and the ability to display more AR Markers at once in the augmented reality view mode.

Finally, there's a suspicious “Update” button in the options, which gives the impression that new features, or perhaps even new Pokémon will be added in the future. For what it's worth though, this is a handy little tool with more information than you could possibly ask, and the fact that it's free just sweetens the deal. If you don't yet have it and you're a Pokémon fan, get it. Now.

You actually don't have to close out of the app to get all 3 pokemon to show up. Once you see the blue dot and get your first pokemon of the day, you can just close the 3DS with the app still running and open it again. It will show a message on the upper right hand corner of the bottom screen that you have a new pokemon delivered to you. You could also leave the app running for consecutive days and just open and close the 3DS three times a day to get your pokemon. I'm not sure what time of day they start delivering the pokemon to you. I usually wait until after work to get mine, which is after 4pm.