This game kind of feels like pants, but super-awesome comfortable pants that massage your body while you wear them.

Kirby's Epic Yarn, the new platformer from Wario Land: Shake It! developers Good Feel, is not the hardest game you'll ever play. There's a challenge, but the challenge lies more in collecting all the hidden trinkets and getting a good score than making difficult jumps and avoiding getting a game over. Most gamers will not struggle to beat this game, but that in no way means they should skip what is one of the most imaginative and jaw-dropping platformers in recent memory. What Epic Yarn lacks in challenge, it makes up for in inventiveness and creativity.

The whole game oozes style, with the yarn aesthetic taking over every aspect of the game from each of the 40+ levels to the overworld. The barrage of yarn-related tomfoolery the game throws at you is wonderful, as you interact with the world around you in brilliant ways. The game isn't mired in its clothy hook, though, as it has many levels that are just wondrous in general, including a music-related level that rocketed near the top of my personal favorites list. This is a beautiful game, plain and simple.

The gameplay is equally beautiful. The controls are tight, and Kirby's newfound powers are easy to get acclimated to. Instead of inhaling enemies for powers, Kirby can use a yarn whip to pick up enemies and throw them. He can also turn into a parasol, car, or anvil depending on the situation. Basically, you turn into a parasol to float after a jump, a car when you're running, and an anvil when you do a ground pound. It's not the Kirby gameplay you're used to, but it still manages to feel natural for the series. The familiar Kirby sights are there, with his roster of enemies showing up in thread-laden glory. Kirby has a lot of tricks up his sleeve, and in order to snag the three treasures hidden in each level, you'll have to make use of all of them.

In addition to the basic gameplay, Kirby can also transform into a UFO, a train, a dolphin, a fire truck, and more. While some of them are under-utilized (the tank that is prevalent in the E3 demo is rarely used), they are all fun and control differently, some using the pointer or tilting. The transformations feature some truly ingenious sections.

To some, the supposed lack of challenge is a worry point. The most apt comparison for Epic Yarn's difficulty could be the 2008 Prince of Persia game, except there is a punishment for failure in Epic Yarn. You lose precious beads, which earn you medals for each level and serve as currency in the game. No, you can't lose lives or die, but it is way more gratifying to come out of a level with a three-starred gold medal than a lame wooden medal.

The bosses are a good example of how the game becomes challenging. They're interesting and amusing, but they're not too hard. If you can make it through them with a gold medal, which basically amounts to not being hit, you unlock two bonus levels in the world you're in.

If you want to ramp up the challenge, you might be inclined to play through it in co-op, as most of my experience with the two-player mode has devolved into good-natured griefing. In theory, the two players can work together and get through certain segments of the game easier, but it's decidedly more fun to pick up your compatriot and throw him around. The mode functions similarly to the multiplayer in New Super Mario Bros. Wii, and it even features a 'bubble' feature for when you want to catch up to the other player.

In addition to the five or six-hour main story, Epic Yarn has a lot of collectibles and bonus goodies, though most of them are focused on getting goofy furniture and wallpaper for Kirby's new apartment. There are a few full-length bonus levels per world, most of which are focused on using a Kirby transformation for the whole level. There are tons of bonus time-trial challenges as well that use previously completed levels in new and interesting ways as you race to defeat enemies, find hidden characters, and more. You can also find CDs in each level, which allow you to replay the fantastic music in a sound test mode. The music, which is generally tranquil, features a lot of great remixes of classic Kirby tunes.

Kirby's Epic Yarn is one of the prettiest games on Wii, and it's also one of the best. The joyous platformer might not be difficult, but it's fun, inventive, and outrageously imaginative. If you like things that are fun and are cool with playing a game that has a world called Treat Land, then you should run out and buy Kirby's Epic Yarn right now. It's been a long time since Kirby was last seen on a home console, but it was well worth the wait.

Seriously though, very good review, Neal. Although I will have to wait in anguish now while the game takes its sweet time to come to PAL for some reason, I'm so pleased that it is every bit as good as all the trailers suggested.

Me want. Me willing to go down and pay Mr Ronahan a personal visit to get his copy.

Me so pumped losing all sense of grammar.

Is it really that good?! Alright I'm getting it day one!

I had to make a choice which upcoming game I wanted to get on release, Kirby Epic Yarn or Donkey Kong Country Returns, and I chose Kirby.

I made the right decision.

Okay, I'm convinced. Good Feel should make the next 2D Mario. Actually, it should be a Waluigi platformer. But Yoshi would be cool, too. Or Waluigi... riding Wayoshi.

Shh, don't give them ideas!

I would be thrilled if they wanted to make a Yoshi game. After this and Wario Land Shake It!, I'm convinced they would be perfect for the job.

If I didn't already have this game preordered from Amazon, I would have done so after reading this review. I'm definitely looking forward to its arrival.

I definitely got vibes of Yoshi's Island in this game, especially with some of the powers (the parasol is kind of like a flutter jump, there is a mole transformation that feels like YI). After this and Shake It, Good Feel is officially one of my favorite developers ever. I can't wait to see what game they make next, because no matter what it is, it will be one of my most anticipated games.

I'm pretty impressed with the scores coming out. I may bump this up on my wish list.

Okay, I'm convinced. Good Feel should make the next 2D Mario. Actually, it should be a Waluigi platformer. But Yoshi would be cool, too. Or Waluigi... riding Wayoshi.

Waluigi riding Boshi? I always wanted to see Boshi in another game.

Only sad thing about it not sucking is that I can't make Kirby's Epic Yawn jokes...

I will be picking this up Tuesday as well as Fallout: New Vegas (try and come up with games that are more opposite than these).  I love me some 2D platformers and this just seems to have charm and creativity bursting from the...seams (sorry).

Wow, a 10. Great to hear. If they were going to wait this long to make a Kirby game, at least it looks like they did it right.

I am so glad that this game is awesome, as I had extremely high hopes for it.

I want to go to Treat Land.

I'm happy that Toys R Us had a buy 2 ger 1 free sale, but unfortunately it occured on the wrong week. Now I get to bide my time with my three games from TRU and wait until Black Friday so that there are hopefully some deals on Kirby.

Though maybe I should give that game a second chance.

I second this; it wasn't as good as the original, but judging it as its own game instead of against its predecessor, it's a good game that I had a lot of fun with.

I thought it was a fine game, myself. The art style wasn't nearly as interesting or organic as Yoshi's Island, but I still had fun with it. I stopped playing when I hit a wall trying to get the Red Coins on the skiing bonus level.

I loved it, and the bonus levels in it contain some of the most devilish 2D platforming I've seen.

I liked YIDS because it played more like a Mario game than a Yoshi game.

Okay, this game is targetted for the younger audience. But I don't care about the target markets because this is awesome. The first Kirby game on a home console! :D

Though maybe I should give that game a second chance.

I can't really say much about that since I found Yoshi's Island extremely disappointing back in the day.

Finally got it, it is really great. My gf apparently used to love Yoshi's Island back in the days, she put in 14 hours in two days (I only managed 3 because of work).

It is absolutely beyond me how anyone could not love Yoshi's Island. 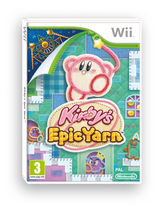