This strategy RPG requires time, patience, and warming up to a new combat system.

Rondo of Swords is a strategy RPG that blends classic RPG elements with fresh battle tactics into a new and unique mixture. It’s a difficult game that requires commitment and enthusiasm in perfecting a new battle formula strategy. Combat uses a grid-based directional fighting system called RMS (Route Maneuver System): Instead of each character fighting in a separate phase, you determine your character's direction to plow through as many enemies as you can in a single turn. This new tactical option requires study as each direction of attack has a nuanced effect. So is this an RPG in which you should invest hours of your time and brainpower? It all depends on how much of each you have to give.

Rondo of Swords follows the adventures of a young prince named Serdic who inherits the holy blade of his fallen kingdom, Bretwalde. He seeks to deliver his people from the clutches of the malevolent Grand Mier Empire, who attacked and seized power during the funeral of his father, the king. For their safety, Serdic keeps his true identity a secret from his fellow warriors in the hopes that he may one day regain the throne. His group consists of a spear-wielding horseman named Kay, and a level-headed but brawny infantryman named Margus (who is often the voice of reason in the constant squabbling between Serdic and Kay). Their team is joined by various intriguing characters as the battle rages to restore Serdic's fallen kingdom.

Your allies garner attack, defense, and support upgrades as they engage in repeated combat. The ability to attack multiple enemies in one turn becomes a valuable part of mastering the game's combat strategy. Other strategic elements include taking into account the length and direction your opponent can move, and sacrificing characters as decoys so that the rest of your team can charge forward to the goal. Additionally, characters that do not join in battle can run errands for health and status items to support the group. At times Rondo plays like a game of chess, and it can be a frustrating yet rewarding experience. It made me curse, scream, and close my DS, but five minutes later I started playing again regardless. You'll wring your hands from the difficulty of this game, but will most certainly pick it back up when you truly understand its formula.

While Rondo’s graphics are eye-catching, they lack variety. The grid-based directional battles take place on the touch screen while animated attack sequences appear in side-scrolling action up top. Upgrading and multiple attacks prove entertaining on the top screen for awhile, but can be skipped to accelerate gameplay. It's a shame there's so little variety to the animation on the top screen and so much grid map fighting on the touch screen.

Another thing you'll want to skip through is the enemy troop rotation. More than twenty enemies might cycle through on different parts of the map, and this seems to take forever. Additionally, Rondo’s touch screen controls lack accuracy and make the game easier and more fun to control with conventional controls.

The soundtrack is minimal and typical. The in-battle character sequences are peppered with one-liners like "Attack!" and "Damn it!" The game's twist on combat could have been better served by touching up these presentational issues. The constant grid-map overlay, lack of sound, and perfunctory touch screen controls steal a lot of the game's freshness.

Still, fans should love the challenge here, but the RPG crowd will probably be split on this one. The intense difficulty of the new battle system combined with more traditional RPG traits turns out to be great fun, but tricky. I'm not sure if the direction-based battle system is the best fit for Rondo or this style of game, because I usually found myself wanting to play it using classic turn-based tactics. However, the subtle challenge of using direction to develop combat strategy instead of traditional turn-based strategy is profound, and worth the effort. The story, cut-scenes, and interesting spin on traditional RPG fighting raise Rondo of Swords above the high mark.

The graphics are attractive, but the constantly superimposed grid map takes away a bit of that grandeur. The lack of variety in the fighting sequences, though classic and initially stirring, drag down any action element. While the environments are eye-catching, they too become similar as the game progresses.

The minimal score is not memorable and the limited voice acting is sprinkled with corny one-liners and profanity.

The touch screen's lack of precision leaves this a game better played with conventional controls. Although probably better for the game overall, the touch screen feature does not work very well. There's enough healthy frustration going on without having to worry about an iffy stylus.

Rondo’s blend of traditional RPG elements such as attack, support, and defense items and upgrades, a set fighting system, and a team of heroes out for revenge make it stand up well even if you don't like the purely directional fighting system. The difficulty of perfecting the nuances of attacking is truly challenging and will be enough to turn some players off.

If you appreciate the game's attempt at varied gameplay you can easily play it for scores of hours. Instead of backtracking in the traditional RPG sense to grab missed upgrades or build experience points, you'll backtrack by restarting the game as you have your Zen realization regarding what's going on with the battle strategy.

Rondo of Swords is a difficult and compelling strategy RPG. The storyline and cut-scenes build up a sense of the characters and the player's mission. If there’s any justice, this title will mark the start of a new franchise. Rondo and its crew would translate well to other media, especially a more traditional RPG (on the Wii perhaps). While the directional battle on the grid map is a long, grinding process, Rondo of Swords is a sparkling RPG with fresh twists and classic style.

For another take on the game, check out bosshogx's impressions.

I'm surprised this review didn't touch on the User Interface at all.  Bosshogx hated it so much he eventually sold his game before he even finished it.  Is it as bad as he claims? 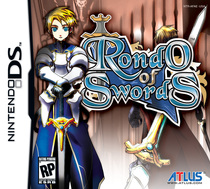