Atlus's best kept secret gets a well deserved sequel. Come on in and find out what you missed with our huge preview.

Atlus recently made fans of Etrian Odyssey quite happy with the announcement of a western port of its sequel. EO2 is not a direct sequel to the first game, so anyone can dive right in and enjoy the new story (a good thing since the original is increasingly expensive and difficult to find). Story details are a bit murky, but it appears that EO2 is set in High Lagaard where an ancient race of people fled to sky castles to avoid global flooding. Eventually they repopulated the land below, and now their descendents are on a quest to regain admission to the sky. Somehow this involves climbing upward through dungeon-like forests. The story in Etrian Odyssey was minimalist, intended to merely provide a canvas for the imagination. It appears that this will remain so in the sequel.

If you're not familiar with the gameplay in the original, Etrian Odyssey is about creating a party of adventurers and developing their talents while exploring a huge labyrinth filled with deadly monsters. It has less story and more challenge than your typical modern RPG, is played from the first person perspective, and to keep from getting lost, you'll have to use the well designed map editing tools as you explore the dungeon. The stylus is used for nothing else, so if you're backtracking or shopping, you can tuck it away. Most monsters are encountered randomly, although in a conveniently predictable way, as a colored threat indicator tells you when an encounter is imminent. However, the most dreaded monsters ("FOEs") stalk around visibly and continue to move toward you even while you're in combat with ordinary enemies. Combined with good production values overall, this helps to set Etrian Odyssey apart from the pack. If you wish to know more about the original, check out my review.

EO2's map interface has been overhauled for efficiency and convenience. The map now crams in 21 icons instead of ten (check screen shots for details). Additionally, you can mark floor tiles using three different colors instead of just the one. Finally, there is a check box in the upper left corner that you can use to decide whether or not the map follows your character around as you explore the dungeon. Having played the first game extensively, I can report that these changes will be more than welcome. 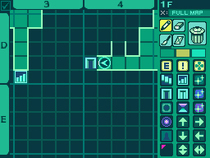 The game's challenge level has been tweaked in a number of ways. EO2 is probably harder overall if only because a frequently abused skill (immunize) has been replaced. The boost meter has also been replaced by a force meter which gives one time access to a special skill rather than greatly boosting an existing skill of your choice. Additionally, you'll find it harder to make a weak party solely for the purpose of item harvesting. Enemies from a few floors up will randomly ambush your party while you collect at an item point. Some particularly sneaky FOEs will now fail to show up on your map as well. You can still spot them on the 3D view as long as you're not in combat.

On the other hand, there are some new items and skills that may help you avoid FOEs, and resting to reassign skill points only drops you five levels instead of ten (this is very helpful since some skills that are good early on are sometimes weak later in the game). Pointless backtracking will be reduced in EO2 by temporary warps that appear on the 3rd and 5th floor of each five-floored stratum. Once activated, you can go directly from town to the most recent temporary warp. It's one-way though, so you'll still need "warp wires" to escape, and you can't save the game as you can at a permanent geomagnetic field.

Shopping and character management are a bit easier now. All items are purchased from one shop this time, and the shop will let you know when you've almost collected enough monster parts to create a new weapon or item. You can also see the effects of a prospective purchase on a particular character via the second screen instead of laboriously using the status screen to check for yourself. There is also a new "item bank", which allows you to store up to 100 items in town, though you're still limited to carrying 60 items with you. Finally, if you just can't stand the original name you chose for a character, you can pay for a new name. 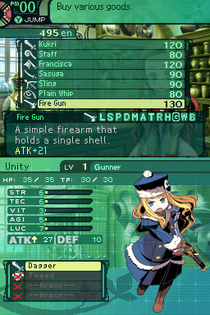 The controls have been slightly modified. The touch screen is now used to switch between floors when using the large map. This frees up the L and R buttons for flipping through character profiles in status screens and while shopping, and for strafing in the dungeons. L is also used to activate automatic fighting while in combat.

Although EO2 features all nine classes from the original, a number of significant skill tweaks should change their utility somewhat. The developers have also added three new classes. All classes can now boost any of their stats via the skill tree, which should allow expert players to create more exotic builds than before. To accommodate the universal stat boosting skills, each character now has a total of 28 skills (up from 21), and a number of skills have been replaced or upgraded. Some skills max out at level five rather than ten this time, which should encourage players to increase the diversity of their builds somewhat.

The new classes are the Gunner, a ranged fighter with an array of physical, elemental, and binding attacks, the War Magus (a witch doctor, essentially), who is part medic and part fighter, and the Beast, an animal that has powerful attacks and a number of oddities thrown in for good measure. All classes except the Beast are available from the outset, and the Beast is reportedly unlocked very early on (another pleasant change from the original). Despite being an animal instead of human, once it is unlocked the Beast class is recruited and developed via the Explorer's Guild just like the other classes.

The 3D graphics look to be slightly upgraded with a little more unique geometry than before. However, it's difficult to determine the scope of the changes without having played the game. The 2D art seems to be of the same excellent style and quality, and music will again be handled by the incomparable Yuzo Koshiro.

If you want more information, try the official website, which is being updated every Monday until the June 17 release date. EO2 will have a rating of E10+ instead of Teen (apparently blood was removed in favor of alcohol references and mild language).

Hmm this seems pretty interesting. I'll have to check it out when it releases. I remember hearing about the first, but it didn't really catch my attention at the time.