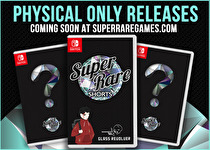 UPDATE: Super Rare Games released a statement changing their approach to Super Rare Shorts on June 14th 2021 after criticism on the original announcement. You can read the changes and that statement here.

The first title from Super Rare Shorts is from the developer Glass Revolver, who released ITTA last year, which our reviewer Jordan quite liked. This new game from Glass Revolver has yet-to-be-announced, but Super Rare Shorts confirmed that it be available for preorder later this year. Since the game is only available in this format, the company has stated that 5000 initial copies will be printed and that there's a month-long preorder window.

There are currently multiple Super Rare Shorts games in development, according to Super Rare Games. These titles can be very different from the usual indie releases that the company publishes. "Shorts can be anything from entirely from-the-ground-up original titles by up-and-coming or veteran indie developers, finished versions of promising prototypes or smaller-scope games, vastly different and more definitive versions of promising titles that struggled to get the spotlight, or even expanded jam games from larger internal studios.". Their main aim is to support indie developers with Super Rare Shorts, stating that these sales of smaller games can help developers support and fund their future projects or highlight their visibility.

I buy physical versions whenever possible, but this is just dumb and reeks of trying to cash in on FOMO to drive sales.