Teddy Together Announced For Europe, Australia 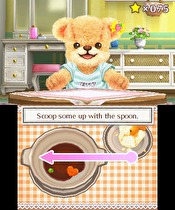 The game stars a talking bear who is designed to help children develop interpersonal skills, and encourages parents to play with their children. Touch screen minigames to keep the bear fed are also included.

This and Pocket Card Jockey give me the impression they're now scraping the barrel for games to localise since they both came out so long ago in Japan.  Though unlikely it'd be cool if we got EX Troopers.

Its definitely a surprise announcement. Im interested to know more about it.

Of all the games we could have gotten why this?

Word is that it will include amiibo support.


"Clothes, special lollies that unlock new fur colours, and seeds that can be planted in the garden are all purchased using coins, which are earned through playing or by tapping a compatible amiibo figure once a day."

Why are 5 grown men talking about a game designed for 5 year old girls? XD