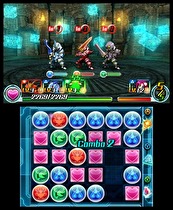 The Wii U has a pretty busy week, however. In addition to Swords and Soldiers II, there's two Virtual Console releases in the form of Super EDF and Mega Man Zero II, plus some potentially interesting indie stuff. Unfortunately, we have to warn you that the makers of The Letter and Maze have returned with something called "Journey of a Special Average Balloon".

But who cares about all that, there's a Swapnote theme this week! I'm here to tell you NIKKI'S ALIVE!

Shiny the Firefly (Wii U)

Spongebob games on Wii U and 3DS (Spongebob Squarepants: Plankton's Robotic Revenge on Wii U/3DS - 50% off, SpongeBob HeroPants - 33% off) are on sale until May 28.

Hello Kitty games from Majesco are on sale from May 25 - June 1.

Joindots games are on sale until June 4.