Several figures are getting the green light for another go on the production line. 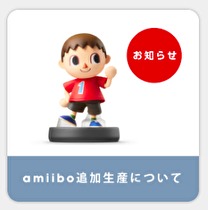 Nintendo is committed to producing more of specific scarce Amiibo for the Japanese market. The Animal Crossing Villager, Little Mac and Captain Falcon Amiibo are currently in “additional production” and are set to hit Japanese store shelves some time this May. The assembly process takes time, including some aspects that have workers assembling parts of the Amiibo by hand. As of right now, this decision is only regarding the Japanese market.

In the most recent investor briefing, it was revealed that Japan has only received about 11% of the worldwide Amiibo shipments, while North America and Europe receive the majority. As of this time, more than 5.7 million Amiibo have been shipped worldwide.

Scalpers are going to have a field day with this...

Hasn't there been a good supply of most Amiibo in Japan?  I remember reading on at least a few sites that most of the Amiibos that were impossible to find in the US were readily available for at least a while in Japan.  This has to be a worldwide thing, even if they're not saying it yet.  It just makes too much sense...

I'm sure it is, we already see it happening with the Marth re-release in April.

i'm honestly surprised no one has created bootleg amiibos by this point.  Those things are like currency.

@rise9 Up until around January, Amiibo were pretty easy to find. All of them. It might have been toward the end of that month, but that's when I started noticing that NOTHING outside of the mainline characters (Mario, Pikachu, Donkey Kong, etc) were at stores. On Amazon here, figures other than that were double or more than the retail value. Villager is listed at about 8,000 yen ($66 USD with the current exchange rate). Even the ones that aren't even released yet (like Nes, for example) are already set on Amazon at 3,000 + yen.


It's getting bad here, too, so personally, I'm not too keen on getting anything that is going to cost me more than the standard retail price.

I might mention, that this is despite the fact that I dropped an embarrassing amount of money getting Shulk and Mega Man. I used Amazon credit, so it's like it doesn't count, right? :-p