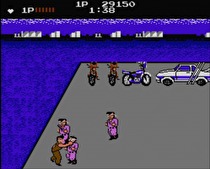 Hopefully you’re still busy with Bravely Default because this week’s releases won’t exactly knock your socks off. A discount on Knytt, a promising new puzzler, and a Kunio Kun game are the highlights. At least the Virtual Console got something, even if it is just a dusty ‘ol brawler.

Puzzle fans have all the luck. They practically get a cool new concept every week. Tappingo has you tapping your way through puzzles to reveal pictures, which gives it a sort of paint-by-numbers-but-more-fun kind of vibe. So, if you’re dying for more Picross, then this just might hold you over.

Well, it’s another farm game. I guess game developers spend a lot of time pining for the simple life, because I feel like Nintendo consoles have more than enough of these kinds of titles. Whether you’ve had your fill or not, My Farm is here with “10 kinds of animals to customize.” By customize I hope they mean “attach lasers to,” because that would make my day.

If you’re in the mood for some River City Ransom then…wait, RCR isn’t on the Wii U Virtual Console yet? Well, I guess Renegade will do. It looks kind of like RCR, but with Double Dragon style controls. It’s part of the Kunio Kun series, so it’s probably worth checking out. I mean, you get to punch guys in the face, right? That’s pretty fun right there.