After more than three months of nothing, the Game Boy Virtual Console returns to life in the United States. 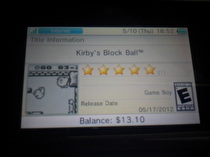 Kirby's Block Ball, a Kirby-themed Arkanoid game, is hitting the 3DS Virtual Console in North America next week, according to a listing in the 3DS eShop. Previously, the game was listed on the eShop, but with a "TBA" release date.

Ironically, Kirby's Block Ball came out in Europe on February 9, which was the last time a Game Boy was released on the Virtual Console in North America. The game hit the Japanese eShop last October.

This is the 31st Game Boy title to come out on the Virtual Console in North America. Japan currently has 53 and PAL regions have 36.

I'm pretty sure I own all 30 of the ones that have been released and the same is probably true for me.

They probably convert these games in bulk, so we could probably expect a new one every week or two for a while.

Sigh.  More than 3 months without a Game Boy game on VC and we get...a Breakout game?

To be fair, it's supposed to be a pretty good game.

To be fair, it's a damn good game.

There. Fixed that for ya. Kirby's Block Ball puts all other Breakout clones to shame.

It's REALLY good. Kirby's Pinball Land is in the same "awesome" category.

Isn't it out in the other territories? Couldn't you just find out if it's got them there?