La-Mulana for WiiWare Canceled in North America and Europe 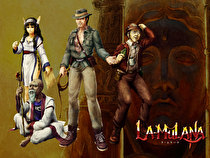 The release of La-Mulana, an independent 2D-platform game, in North America and Europe has been canceled, publisher Nicalis confirmed over Twitter recently.

The game was originally released in Japan in 2005 as an independent Windows-based game. Later, it was ported to the Japanese WiiWare service on June 21, 2011. Originally, Nicalis had signed on to release the game in Europe and North America as the publisher. Months without word on the game had gone by, and it was now confirmed that the release was canceled.

The official word from Nicalis's Twitter is as follows:
Regarding La-Mulana, we have chosen to cancel publishing in North America and Europe for WiiWare. -- Nicalis, Inc. (@nicalis)

La-Mulana features 2D gameplay reminiscent of Metroid and the later versions of the Castlevania games. It features a lead explorer character that uses a whip in order to defeat the enemies that live within the tomb of La-Mulana.

I would bet that Retro City Rampage misses the Wiiware as well and when it does the final nail in Wiiware's coffine will be complete.

Last I talked to the dev of Retro City Rampage, he's planning on releasing it anyway, even though he knows he won't make the threshold and he'll take a loss on just getting the ESRB rating.

Last I talked to the dev of Retro City Rampage, he's planning on releasing it anyway, even though he knows he won't make the threshold and he'll take a loss on just getting the ESRB rating.

Pretty awesome for Wii owners if it actually happens, but sucks that he will most likely be taking a loss.


It's kind of a shame that ESRB ratings are necessary.  I bet Virtual Console would have more options available if companies didn't need to pay to have old games rated before releasing them.

I'd be more surprised if Retro City Rampage is EVER released... it was announced what, four, five years ago?

This is the nail on the coffin for WiiWare, if it wasn't already 6 feet underground.  Indie devs just seem to struggle with using the service.  It's extremely frustrating to see how many hoops Nintendo makes you jump through.  Games like Fez, RCR, Spelunky, The Binding of Issac and many others seem to find it so easy to get their games out there using other services like XBLA for indies and Steam or Desura.  I remember Edmund McMillen trying so hard to get Gish on WiiWare and Nintendo just completely ignored him.