It's official: Madden NFL 13 isn't coming to 3DS this year. 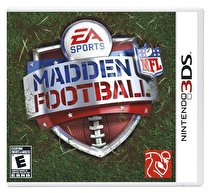 Following speculation, EA Sports confirmed to NWR today that Madden NFL 13 will not be coming to 3DS this year.

EA's official statement was short and to the point: "There will not be a new version for 3DS this year."

Madden NFL Football was a launch title for the 3DS in early 2011. It was built specifically for the system by EA's North Carolina studio. Madden NFL 13 is still coming to the Wii this year.

I know some people might say the 3DS version was crappy last year, but there was such good groundwork there. I'm saddened by this game's absence.

The on the field gameplay was really good. If they'd taken that and added a Franchise mode and a couple other things it would have been great. I'm somewhat surprised that even though they made the engine and all the hard stuff last year they're going to abandon it based on lackluster sales of what was clearly a lazy entry in the series at the launch of a system that didn't really take off until much later.

Between this and the fact MW3 didn't come to the 3DS, I'm pretty disappointed. Madden and COD are two of the (if not the) best selling franchises of all time. If those two franchises are absent from your system, that's not a good thing. I just wonder what EA's reasoning for it is. It can't be that the 3DS doesn't have a large install base, because its already sold 15+ million and that's pretty good, and certainly a lot more than the Vita has. So why is the Vita getting this but the 3DS isn't?

I'd say it's more a worry if the next CoD doesn't come to 3DS. Activision's logic last year (I assume) was that the DS game sold to both DS owners and 3DS owners.

Follow-up question: Why not just have good third party effort?

From talking with people involved with Madden NFL Football at the 3DS launch, it was very much a rush job. Basically, they were given a deadline, and they had to do what they could do in that time. Unfortunately, that meant a solid framework of a game with no depth.

I'd also assume that development on a future 3DS Madden game was halted until production on Madden NFL 13 for all consoles began, which likely gave them time to look at sales and nix the 3DS version of Madden 13. Basically, this was a business decision that we can all poke holes in (The prior game was a lackluster effort. 3DS didn't pick up steam until the fall. etc.)

The weird thing about all this is that I was under the assumption that the Wii version sold like crap, but I'm guessing it's not doing that bad if they're making another one.

Side note: I'm willing to fight anyone (not with words, but with fists) who wants to look me in the eyes (likely impossible given we're on the internet) and tell me that the Wii version doesn't receive any effort. Does it get nearly as much love as the HD versions? Hell no (it also doesn't sell as much). Does it basically have the equivalent of a B team working on it? Probably.

I've made mention of the fact that I see Madden on Wii as an excellent B-movie of a game. It's got warts (the quality of the visuals has stagnated since the smooth 2009 redesign, for one), but I enjoy the hell out of it. For me, it is like someone at EA was like "Hey, that one guy really liked Madden back in the early '00s, but fell off the wagon when it got more complicated. Let's make a game just for him!" I love Madden on Wii.

Since 1990, I have a rule of buying the video game from any year in which my football team wins the SuperBowl.  That way I can "relive" the season any time I want via electronic representations.

As a Giants fan, I own Tecmo Super Bowl for the NES (best football game ever) and Madden 2008 for the Wii (... meh) and I was thinking about getting Madden 12.

I really loved using the wiimote to select passing targets when my friend forces me to play Madden 11 for Wii.  Is that still done in 12? Any noteworthy differences from 11?

Also, can I just play a season (one game from the 11-12 schedule after another) or would I have to play that silly franchise thing where I have to go to training camp and worry about salaries and trades and blah blah blah... ?

Did we ever get real sales numbers for Madden 3DS? Somebody in one of these threads mentioned the number 150k, and if that were the true figure I'm pretty sure you could do a Madden with the minimum things we've mentioned here on a budget that would turn a profit with those sales, especially with the engine and all that already done. FIFA 12 for 3DS is just so damn good; I know that's got a wider audience factoring in international markets, but I'm sure they could find a way to make it work.

Yeah, it does seem weird that they wouldn't give another Madden game a chance that actually had effort put into it, especially after releasing a bare-bones game to lay the groundwork. They had to figure it wasn't going to sell that well. It's possible that they just didn't have time to release one this year and will make one next year. It could also be that the usual Madden audience doesn't own handhelds.