Nintendo Has No Plans to Fix Mario Kart 7 Glitch

A Wii Sports Resort themed exploit may be ignored entirely. 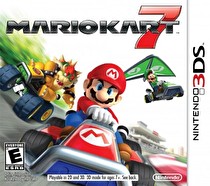 A frequently-exploited glitch in Mario Kart 7 for the 3DS will not be fixed, as confirmed by Nintendo.

The glitch occurs on the track Maka Wahu, and at one point while racing, players may drive off of the track and respawn about one third of the course further in the race.

Although Nintendo has been emailed about the glitch, their reply suggests that no course of action will be taken. As reported by StickTwiddlers, Nintendo of America's Buddy Roemer says,

"We are aware that it is possible to navigate a certain part of the track in Wuhu Island in a way that allows a large part of the course to be bypassed. There are no plans to update the game to remove this shortcut as doing so would create an unfair advantage for the users of the original release of the game."

Roemer's comment fails to reference any possibility of patching, something that Nintendo has confirmed will be made available for 3DS titles.

I wonder if Nintendo's CSRs use fake names or if this guy really shares the unlikely name with Republican Presidential candidate and former Louisiana governor.

Really?? Can't they patch this through an update? I don't understand why they are going to simply ignore this, especially since more people are starting to spam this level.

They give a reason, it's just bullshit. Why have a system in place if you're never gonna use it? The advantage only applies to ghost data really. Nintendo should be able to keep you from going online if you don't have the update like Xbox Live already has been doing for years.

Its just like the permanently locked door glitch in Metroid: Other M. Nintendo never got around to patching that either...

I suspect the problem is just with Nintendo in-house developed titles where Nintendo is not adding in the hooks to software patch after release.

There are plenty of Wii games that have received proper software patches (Black Ops, MW3, Conduit 2) for single and multiplayer and it works very well.  This is because the developers put in those hooks during the game development.

I suspect you will see many third-party 3DS titles with the proper hooks for software patching.

So it seems that Nintendo didn't (currently) make it so you can force a patch on their 3DS games' multiplayer components. Oh dear.


Hopefully Nintendo gets up to speed on the possibilities and realities patching can offer. It would a shame for this spawning glitch to continue to ruin the track.

The online Mario Kart games have a reputation of being games where people like to do everything possible to win even if it means cheating or doing cheap stuff. I'm sure this glitch will only further add to that reputation.

This is why I can't ever get 3 stars in 150 cc.
Not to mention the glitches I keep getting in wifi races.
Couldn't Nintendo fix the game like they did skyward sword?

This is why I can't ever get 3 stars in 150 cc.
Not to mention the glitches I keep getting in wifi races.
Couldn't Nintendo fix the game like they did skyward sword?

This glitch has NOTHING to do with your inability to get 3 stars in 150cc. I got 3 stars in the appropriate cup in both 150cc AND Mirror and I didn't need to perform the glitch to get it and the CPU never performs the glitch either. Come up with a better excuse please.

"What will Nintendo do to fix Mario Kart's online from simply descending into 'how few mistakes can i make to get the best times?'"

The answer, as judged by this glitch and lack of patch? Nothing.

Is this glitch widespread as it seems? I've yet to see someone online use it.

I would much rather Nintendo fixes this, but it isnt that big of deal. It's super easy to do and it's only one stage. I don't like to do it, but I don't lose sleep over it either when I see others do it anymore.


Every other track you lose on is simply because of your own inexperience and/or luck. If you're good enough to pull ahead of the pack early on, even 2 blue shells wont be enough to stop you. This Mario Kart is much more enjoyable and fair than the DS one ever was.


Still I don't like the overall vibe from this article, especially in regards to Smash Bros in the future. If one character can exploit a flaw in the game and continuously grab another character without moving an inch up until 999% there has to be updates to the game.


When next time some convention roles around and NWR has interviews with Sakurai or anyone from Nintendo I think it would be a good idea to bring this kind of thing to their attention.

This is very disappointing.  Especially since that is one of my favorite courses in the game and I feel like I can never pick it online because I will look like a cheater.

Is this glitch widespread as it seems? I've yet to see someone online use it.

It happens too frequently for my tastes. When I see a lot of people voting for Maka Wuhu, I already know what's going to happen once the race starts. I haven't learned how to do the glitch myself, I'm simply not interested. It just saps the fun out of a race when people are always picking the same course in the hope of boosting their VR. Boo!

Yeah, very disappointing that Nintendo is aware of it and cannot or will not do anything about it.

Seacor said about what I was going to say. I suspect that Nintendo didn't create Mario Kart 7 with patches in mind, so it wouldn't be an easy fix. If they wanted to fix it, they'd probably have to do something that's similar in goofiness to Zelda Skyward Sword's Save Data Update Channel. There were several tracks in Mario Kart Wii that had this kind of glitch, and they never got fixed. I had just hoped that Nintendo developed a better checkpoint system in the next game, but it would appear not. Ten bucks says there are more glitches like this one that will be discovered.

I'm sure that future Nintendo games will allow patches, though that may be limited to ones made to accept DLC. Plus Mario Kart 7 was obviously and even admittedly a rushed product, though that was even more of a reason it should have had the ability to be patched.

Am I the only who doesn't care?

Maybe I haven't run into enough douches online, but if Nintendo removed the Wario Stadium trick in MK64, I'd be pissed. I see this as something similar.

Just play in the NWR Community, and we can not be assholes and play other races, too.

I wonder how many others here interpreted the wording of this like I did.

"There are no plans to update the game to remove this shortcut as doing so would create an unfair advantage for the users of the original release of the game."

How would this create an unfair advantage with people assuming he's talking about a patch that updates the game, that more than likely would be required by all those who go online with it? Simple. I don't think he's talking about an actual downloadable patch, but an updated version set in the newer batches that get shipped to retail stores. Updated "physical" copies is nothing new with Nintendo, but this is one of the more heavy multi-player games (especially being online-compatible) that they have that they can't go that route with, because then a discrepency between older copies and newer copies would arise, giving way to that unfair advantage for the users of the original release.

I still think they can patch it, since Nintendo did mention (unless I'm mistaken) that the eShop can hold updates to games.

If Nintendo was unwilling to admit when they made a mistake, we'd still be paying $249.99 for a 3DS.

If Nintendo was unwilling to admit when they made a mistake, we'd still be paying $249.99 for a 3DS.

I don't doubt that was a painful decision for them to come to, though. Yes they did it, but that doesn't mean they liked it or would want to do something like that ever again if they can just ignore it instead. The 3DS pricing was a massive boo boo that they couldn't just ignore, but this one is a minor glitch which most people won't even know of.