Mario Kart Wii console bundles and Nintendo Selects titles coming to North America May 15 and to Europe May 20. 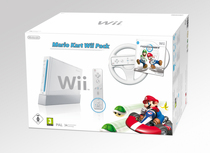 New, cheaper Wii console bundles as well as a new line of discount Wii titles called “Nintendo Selects” will be arriving in stores in the next few weeks, both Nintendo of America and Nintendo of Europe confirmed.

The new bundles will include a black or white Wii console, a copy of Mario Kart Wii, a Wii Remote Plus, a Nunchuk controller, and a Wii Wheel that will match the color of the hardware. The new Mario Kart bundle will retail for $149.99 in North America, while in Europe, the existing Wii Sports Resort Pack will see a price reduction.

The Nintendo Selects titles are budget titles that will retail for $19.99 in America and in Europe at a reduced price. The North American titles include The Legend of Zelda: Twilight Princess, Animal Crossing: City Folk, Mario Super Sluggers, and Wii Sports. In Europe, Wii Sports, WarioWare: Smooth Moves, Mario Strikers Charged Football and Animal Crossing: Let's Go To The City will be available under the new discounted line of software. The new console bundles and Nintendo Selects titles will launch on May 15 in North America and on May 20 in Europe.

Having Fun with Family and Friends Just Became More Affordable than Ever With New Suggested Retail Pricing.

REDMOND, Wash.--(BUSINESS WIRE)--Nintendo is dropping the suggested retail price of its Wii™ system to $149.99 and including a Mario™ game with the Wii hardware. Starting May 15, the newly priced Wii system will come in either black or white with the Mario Kart™ Wii game and a matching colored Wii Wheel™ accessory, replacing the previously included Wii Sports™ and Wii Sports Resort™ games.

“The new suggested retail pricing for both the hardware and select games will help create more of these magical moments for even greater numbers of people.”

Also on May 15, Nintendo launches the new Nintendo® Selects collection of Wii games, a set of popular games that millions of people have already experienced, at a suggested retail price of $19.99. The four must-own games in this collection are The Legend of Zelda™: Twilight Princess, Animal Crossing™: City Folk, Mario™ Super Sluggers and Wii Sports, which is available for the first time as a separate software purchase. Parents and video game fans can now easily expand their library of fun, family-friendly Wii games.

“From the day it launched, Wii has let players of all ages and experience levels have fun with one another,” said Nintendo of America President Reggie Fils-Aime. “The new suggested retail pricing for both the hardware and select games will help create more of these magical moments for even greater numbers of people.”

With Mario Kart Wii now included with the Wii hardware, players will be able to enjoy fun go-kart racing with Mario and all his Mushroom Kingdom pals right out of the box. The Wii Remote™ Plus controller, Nunchuk™ controller and Wii Wheel included in the package will all match the hardware, meaning they will be either black or white. The new black Wii Wheel will also be available separately at a suggested retail price of $9.99.

Remember that Wii features parental controls that let adults manage the content their children can access. For more information about this and other features, visit http://wii.com.

4 May 2011: With the summer holidays edging closer into view, Nintendo today announced the launch of a new range of software titles that are light on the wallet and heavy on fun. The Nintendo Selects range, launching on 20th May 2011, is a value for money* selection of popular Wii game titles for all the family.

Nintendo has also announced that on 20th May 2011 it will be reducing the trade price** of its existing Wii Sports Resort Pack, which includes a black Wii console, Wii Remote Plus, Nunchuk and a copy of Wii Sports and Wii Sports Resort™ on one disc.

Wii Sports introduces a new entertainment experience. Offering five distinct sports experiences, tennis, bowling, golf, boxing and baseball - each using the Wii Remote in a different way to provide a natural, intuitive and realistic feel. Warm up and throw yourself into the action with the hit sports game that will have you on your feet and having fun faster than you can swing a tennis racquet.

With over 200 lightening-quick microgames and controls that will have you waving, flapping and jumping around the place, WarioWare: Smooth Moves takes interactive gaming to a whole new level. All you need is a Wii Remote and your best moves to be the champ. With hundreds of microgames and with the help of the Wii Remote, you will swing, spin and squat your way to victory.

Mario takes to the soccer pitch in Mario Strikers Charged Football, bringing his own unique 'fighting football' style to Wii. In this follow-up to Mario Smash Football, you use the skills provided by the Wii Remote and Nunchuk Controller to win the ball, score unstoppable goals and take control of the goalkeeper to perform spectacular saves.

In Animal Crossing: Let’s Go To The City you can while away the day chatting with friends, be a workaholic or figure out a pace of life to suit somewhere in-between. Try your hand at fishing, plant trees and flowers, discover artifacts from ancient worlds, gaze at the stars, decorate your home, see a hit show or make a name for yourself as an auction-house entrepreneur. It’s all up to you!

For hours of great value entertainment for all the family, look out for Nintendo Selects and Mario Kart Wii Pack when they launch across Europe on 20th May 2011.

I be surprised if they weren't.  Different regions different games sold better.

Otherwise, it is a little perplexing. I'm surprised that there aren't more titles for the initial line-up. I'm also surprised that Wii Sports is offered on this line despite being a bundled game in both continents.

Wii Sports is being offered for all of those whose first Wii is the Mario Kart bundle. So in that case, its for almost nobody.

Excitebot :D  Seriously if you liked Excite Truck.  Do yourself a favor and get Excite Bot.  Its great.  I should pick up Excite Truck one day.

YOU NO CHOOSE. NINTENDO CHOOSE.

But good cheese and good cereal.

Chozo I seem to recall the Player's choice games had to have a certain amount of the games sold for it to be eligible for the Players Choice line.  So in essence the players did chose them since they did make them sell a certain amount.

Well, what he says is somewhat true. During the GameCube era, Nintendo lowered the amount of copies a game needed to sell to be eligible for Player's Choice status, it was 400k down from one million. So the games still had to sell decently enough, but much less than on previous systems. They also allowed third-party titles in on the line, where I believe previously only Nintendo-published titles could reach the status.

There probably was some bar in order for a game to be eligible for Player's Choice. The problem was that bar wasn't very high.... The GC era was a sad time for Nintendo because the GC sold poorly and there weren't a lot of million sellers. Even among 1st party titles the sales were disappointing most of the time... So the bar had to be lowered, because otherwise there wasn't much that could be considered Player's Choice if they continued to go by the standard used for the SNES and N64.

Actually, it makes perfect sense.  A lot of casual gamers who picked up the Wii played Wii Sports and absolutely nothing else, so they never felt the need to actually go out and buy any other game.  I'm sure Nintendo was really frustrated at that, because on one hand they made a really great entertainment package that consumers saw a lot of value in, but on the other, it was a little too complete, because the casual gamers had all that they wanted.


With Mario Kart, they're going to get a lot of people who buy that, play Mario Kart, and then say "Well, what about that sports thing everyone was going on about?"


The danger, of course, is the possibility that because Wii Sports isn't included, people won't buy the system.  Once again, this is casual gamers we're talking about.  When my 2nd daughter was being born, we had to send our oldest to my parents for 3 or 4 days.  So they wouldn't get bored, I also took over my Wii and about 10 games, all the casual games I had (Just Dance, Wii Party, etc..).  The only games that were played were Just Dance Kids (my daughter) and Wii Sports (my parents and my kid).  My parents even asked to keep the Wii for another week so they could play more Wii Sports.