Additionally, Pikmin 2 might debut as a Nintendo Selects title. 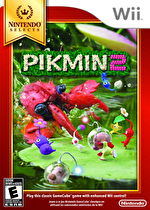 Mario Power Tennis is listed for an October 6 release, but since Nintendo has issued no official confirmation, the validity of the date remains in question.

The Pikmin 2 listing has a release date of June 11 listed, going in line with Nintendo Power's June release date when the game was officially unveiled in the magazine's recent issue.

Still, with actual box art showing up on reliable retailer sites, it appears that we will be getting Mario Power Tennis and Pikmin 2 as Nintendo Selects sometime soon.

Thanks to M for the tip!

I only hope that NPC Jungle Beat is also re-released as a Nintendo Selects title as well.

Since I'm planning on buying NPC Pikmin 2 despite owning the European version, I would love to be able to pay $10 less than I expected to.

Part of me would rather it not have that red trade dress, but the other part of me says, "Get over it, we're not going to look at the cover art."  And then the men with butterfly nets try to get me.

I have Power Tennis on GCN,  but I might go for the Wii version.  Definitely getting Pikmin 2.

Power Tennis has been Nintendo Selects in Europe since the brand was launched, so that's very plausible.