It's not about the puzzles, but I think it could do without them.

Quiet, atmospheric games can be difficult to demo in a loud, crowded environment like the PAX East show floor, but Spirit of the North managed to draw me in nonetheless. It opens in a snowy landscape, giving you control of a fox that can do little more than run, jump, and wag its tail. There is very little to do but walk forward in the opening areas of the game, but I didn’t really have a problem with that. Taking in the scenery—which looked great in the PC build we played—was engaging on its own, and the excellent music helped to sell the emotion permeating each setting. 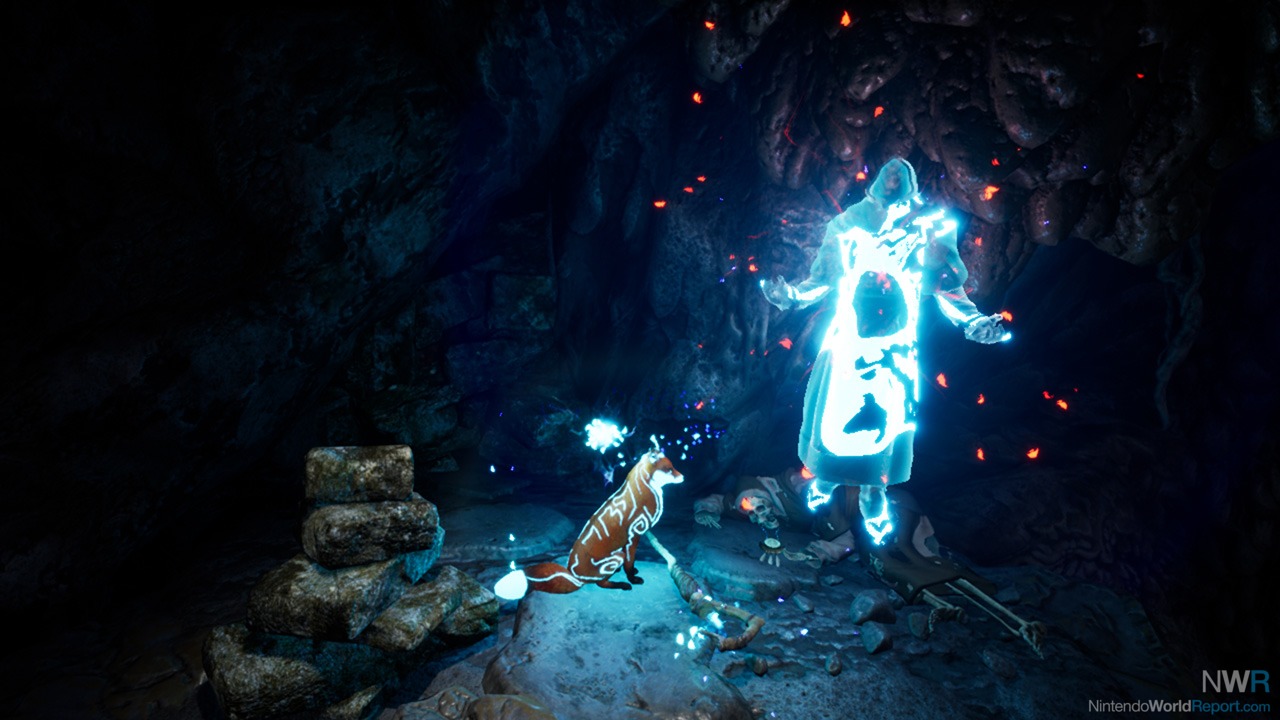 Eventually you meet the ghostly image of another fox: the eponymous spirit of the north. This spirit acts as a guide that shows you the way through the environment, serving as a companion in the lonely wilderness. These simple moments were the core appeal to me when playing Spirit of the North, and I wasn’t surprised to hear the developer hosting the demo say that they were the main focus of the game.

Shortly after, I began to encounter puzzles based around transferring the spirit’s magic into runes to open pathways. In order to achieve this, you first need to absorb the spirit’s power from a particular kind of plant and then carry it back to the rune. I call them "puzzles", but I think that's being a bit generous; there isn’t really any particular problem-solving involved. There’s no downside to carrying the spirit’s power, and it doesn’t disappear until you’ve transferred it to the rune, so it’s best to keep a charge of the power whenever possible. This leads to frustration whenever you happen to walk past a power plant without seeing it, as you’ll inevitably find yourself at a dead end with no option but to simply backtrack, find the plant, and then return to the dead end to progress.

Much more interesting were the bonus side-tasks of placing a magical staff next to the deceased body of a traveler to free their spirit, presumably allowing them to pass on peacefully. The staves are hidden throughout the world, waiting to be stumbled upon or sought out specifically, and their optional nature makes them far more satisfying to find than the power plants that let you open runes. Since I never felt like I was pressured to find a staff in order to continue my journey, I enjoyed stopping to look around for them whenever I noticed a body much more than I relished the “main quest” puzzles.

I spent a little under an hour with Spirit of the North, and the rune puzzles didn’t start to pop up until the last fifteen minutes or so, so I didn’t get enough time with them to know if they were developed further or if they become less prominent as the game goes on. Hopefully, the full game trends away from them, because the time I spent earlier in the demo simply taking in the environment at my own pace was a great experience that I’d love to play more of when Spirit of the North releases on Switch this spring.