Kunio-kun is still in the same high school.

At TGS 2011, I had a chance to play Nekketsu Kouha Kunio-kun Special, whose annoucement I reported on last week. The build I played looked virtually finished, with almost all modes being playable.

I first played the arcade mode, and can confirm that this mode is based on the original arcade version, rather than the Famicom version. The art style on the other hand follows their sequels. Good news for fans of either version is that key settings are adjustable, allowing players to assign jump to A + B (like the Famicom/NES version) or another button (like the arcade version). Controlwise, this game is simple, requiring players use only the D- or Circle-pad, and at most two or three face buttons. The most noticeable new addition to gameplay is auto-guard, which make the game easier. The first stage was pretty easy, but in the beginning of the second stage, there came enemies on motorcycles who killed me instantly. Although it is unclear to me whether this is faithful to the original, it is safe to say that there is a spike of difficulty here.

I had a glimpse of the story mode. As far as I could see, it consists of alternating unplayable story scenes and playable battles.

In the battle royal, or free-for-all, mode, I was eliminated quite quickly, but I had to sit and watch until the CPU had finished the match, quite annoying.

In the mission mode, every time a mission is completed, you will get points, which is used to unlock characters. This mode was blocked in the TGS version though, and made the game freeze if i attempted to play it.

The gallery mode offers illustrations, box arts of the franchise, and profiles of playable characters.

Graphics were reminiscent of the sequels, but don't look that attractive in 2011. Especially the polygonal backgrounds which looked cheap or at best, out of date. Characters’ sprites are totally flat, which makes them look slightly weird in steroscopic 3D. However, since the character sprites size never changes, despite being at the front or rear of the stage, the stereoscopic effect helps you perceive whether the playing character is beside opponents or not.

Last but not the least, what most surprised me was the fact the game froze twice, and each time I had to reboot the system. Though either freeze could not be reproduced, I hope the developer will fix the problems before its release. 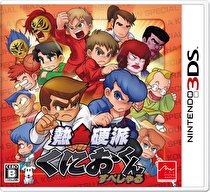