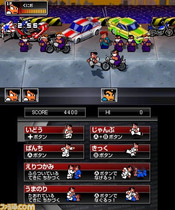 The Kunio-kun series, whose inaugural game Nekketsu Kōha Kunio-kun (revamped and released in North America as Renegade) was originally released in Japanese arcade 25 years ago, is coming to 3DS with a remake of the original game coming out this winter, according to Famitsu.

Some fans might be familiar with Renegade, but most gamers are likely more familiar with its sequels such as River City Ransom or Super Dodge Ball. The game was Technos' first Famicom port.

Looking at screenshots, the most noticeable difference from the original game lies in its art style, which looks quite different from the original one, but very faithful to that of the sequels. With the familiar cartoony sprites, the game offers at least 6 modes.

Nekketsu Kōha Kunio-kun Special will be playable at TGS 2011. Expect a follow-up impression!