Wait, you haven't played one of the most adorable games on Wii U? Well, this portable version is fine, too!...

Between known commodities from Nintendo and a few Nindies, the 3DS has some fight left....

After a jam packed What We've Been Playing we dive into the mailbag for the first time ever!...

You probably can't say that in the Miiverse....


THE FAMICAST: Episode 87 - A REAL PEACH

Coming to directly to you....

The Four Horsemen themselves dissect the latest 3DS Nintendo Direct.... 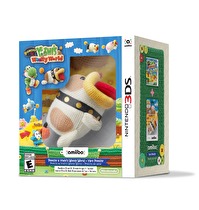