An Uncanny Journey Through the Marvel Ultimate Alliance Multiverse

The story of how a PC developer paved the way for a beloved Baldur's Gate-like Marvel series on GameCube, Wii, and Switch.

The year is 2003. I’m 15 years old and reading an issue of Game Informer with the X-Men, my then-favorite comic book characters, on the cover. I devoured all of the information I could find about X-Men Legends, which seemed like a fever dream come to life. It was Baldur’s Gate but with the X-Men heroes, coming from Activision - the same publisher who were responsible for the excellent Spider-Man games of the prior few years. The developer was Raven Software, a Wisconsin-based studio I knew little of that were best known for PC games like Hexen, Heretic, and Jedi Knight II. X-Men Legends was their first console game. As a primarily console gamer, they were foreign to me. I did not know they’d soon go on a run of excellence for the next decade that is still near and dear to my heart. 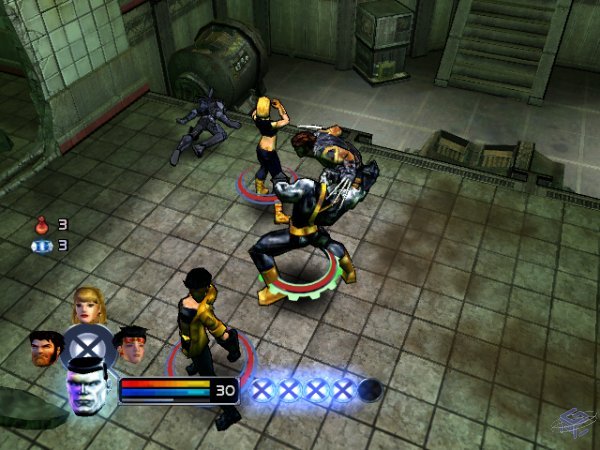 Before he was the Project Lead on X-Men Legends, Patrick Lipo cut his teeth working on Heretic and Hexen. “It was the wild, woolly days of first-person shooters, when most of the rules were still unwritten,” Lipo recounted. “There’s wasn’t a ‘proper’ set of keys to use or specific set of features that every shooter needed to have. I felt like there was a lot to discover and to define, such as when we took the shooter mechanics we knew and put them into a third person game for Heretic II.”

Raven in the late ‘90s was, in Lipo’s words, “a great place to be,” primarily because the team gelled as they spent lots of time working on new PC games and then playing those PC games as they were ready for primetime. At the turn of the century, the studio started working with bigger licenses thanks to projects like Star Trek Voyager - Elite Forces and Star Wars Jedi Knight II: Jedi Outcast. 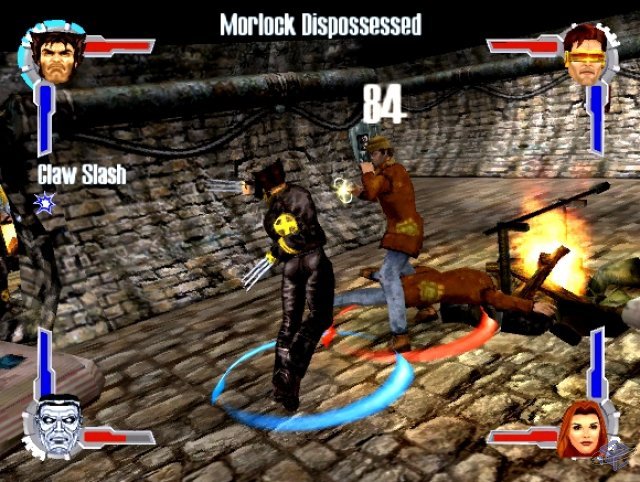 During this era, Lipo spent a lot of time pitching ideas to Activision, hoping to find his next major project. In the midst of this gauntlet, Activision sent over a treatment for an X-Men RPG that the publisher was hoping to find a developer for. “It was unbelievable when I read it,” Lipo recalled. “So unlike all the other games the company was doing at the time that it didn’t seem real.”

At the outset, Raven had a desire to focus on the team aspect of the X-Men. Lipo said in the Game Informer cover story that my younger self devoured: “It was basically Final Fantasy with X-Men. Over time, however, it really started to evolve. As development moved along, we added more and more elements of action and combat to it.”

Regarding that Final Fantasy-inspired origin, Lipo expressed mild regret. “Selfishly, I knew [turn-based X-Men RPG] would have been an amazing game for me to play,” he said. “However, I knew it it just wasn’t quite right for the studio at the time. And maybe, just maybe, the world wasn’t ready for it either. Are they ready now? I’d sure love to find out...”

That initial idea was more Final Fantasy VII-inspired than anything else. (For the record, while I personally think Cloud exudes more Wolverine, Lipo leans towards Cyclops being Cloud-like because he’s “a burgeoning leader with a massive weapon”). Upon reflection however, Lipo’s preferred analog would be Final Fantasy XII. “That game had all the features and function of a classic RPG with enough of a realtime feel that I think it could be turned into some really great action with plenty of combos and special moves. It had fairly open exploration compared to earlier [Final Fantasy games], but it was still more structured than Final Fantasy XV, which I think would go well with a world-hopping franchise-wide tale.” 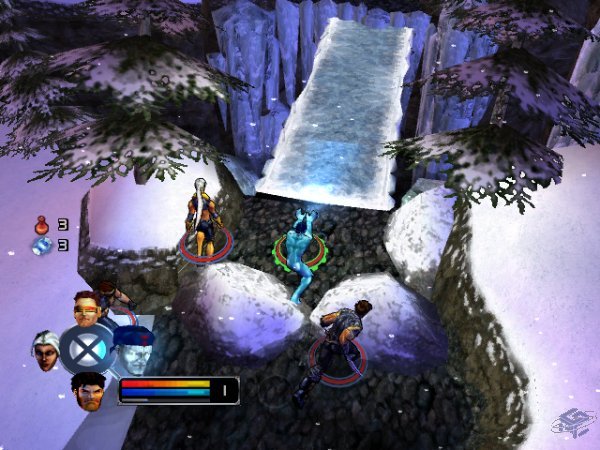 But that classic JRPG-inspired idea wasn’t in the cards back in the early 2000s and in time, X-Men Legends started to take shape as a dungeon crawler, focusing on the action that was at the core of the comic superhero group. Different abilities let you snikt up foes as Wolverine, zoom around as a fleet Iceman, or fly as Jean Grey. Regarding Iceman, Lipo loved the frozen hero. “I was really happy with our ability to take a simple mechanic like a double jump and turn it into limited flight on an icy slide. Plus you could use his slide as a battering ram!”

This was Raven’s first home console project and by Lipo’s admission, it was “definitely a trial by fire,” not just because it was for GameCube, PlayStation 2, and Xbox, but also because this studio mostly made shooters before.

Allison Salmon joined Raven in 2003, about a year before the game shipped to work on the FX editing tools and as the game got close to release, the Xbox-related build processes. “I was really thrilled when I was hired and found out that was what I would be working on,” she recalled. “I was a fan of the ‘90s X-Men cartoon so I thought it was awesome that I got to work on an X-Men game. While working on X-Men Legends and the other Marvel games I became an even bigger fan of Marvel.” 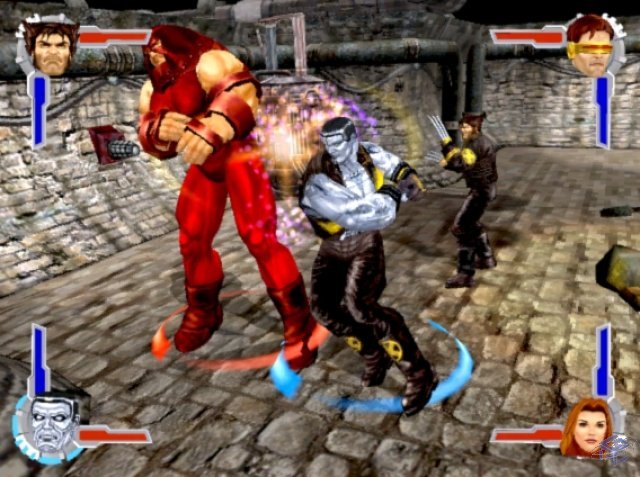 The story of X-Men Legends mostly centered around Alison Crestmere, an adaptation of the mutant Magma, as she becomes embroiled in a battle between the X-Men and the Magento-led Brotherhood of Mutants. While the overall story boiled down to a tried-and-true Xavier vs. Magneto tale, it was a bit of a greatest hits of X-Men lore. The Shadow King took the fight to the Astral Plane, the Morlocks popped up in a sewer, and naturally Sentinels sought out the destruction of mutantkind. Working with that established lore was less onerous than you might expect, as Lipo said it wasn’t “that big a deal” since “there are guides and model sheets and tons of previous works to draw from.”

With that in mind, Magma’s inclusion as the player’s entry point wasn’t always meant to be a riff on a pre-existing character. “This was originally going to be an original hero, a blank slate that the player could mold, but it just proved too difficult to get approval for,” Lipo told us. “Luckily Magma served the storytelling purpose effectively.”

The rest of the character selection process was both obvious (of course Wolverine was going to be in this game) and deliberate, as heroes were picked due to their popularity and variety, as well as how they would look in action from a top-down perspective. Enduring X-Men heroes like Cyclops, Storm, and Beast made the cut for the first game, while popular ‘90s heroes like Gambit and Psylocke were also playable. 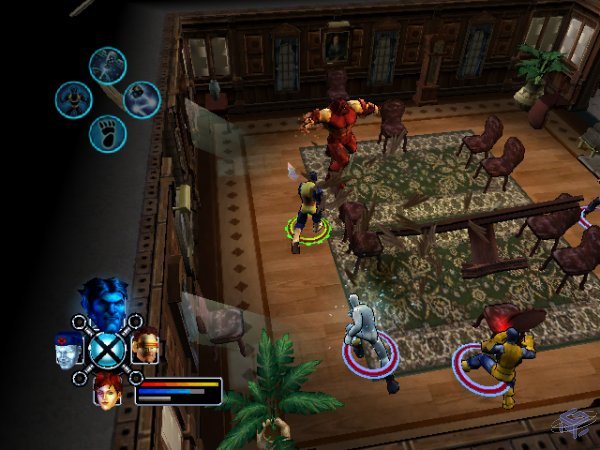 X-Men Legends was initially just a single-player game, but during development, it was turned into a four-player local co-op experience. That’s noticeable in the fact that the game does not let you start with a full co-op party. It rekindles the frustration I had with Secret of Mana as a kid as you couldn’t play co-op right away.

Late stage co-op nitpicks aside, X-Men Legends was a success when it launched in the fall of 2004 - both well received critically and financially. It joined the Player’s Choice label on GameCube and reportedly sold more than two million copies across all platforms. Yes, that includes the few dozen copies probably sold on the N-Gage.

X-Men Legends worked after lots of iteration and experimentation at Raven. Near the end of development, with the game running its final form with four characters journeying the dungeons at once, Lipo made a discovery: “I had the best time switching between the four characters in my team and using their mutant powers, constantly switching to a new hero to use their powers while the others recharged their energy.” That realization led to minor regret, as he went on, “I wish I could have worked that playstyle into the game more directly and rewarded the player for switching between characters that way. We already had a mechanism to track power combos, but if we could have rewarded the player for chaining from one hero’s power to the next hero (perhaps recharging all team members more quickly), I think it could have been an even more fun way to play.”

With the success of the original behind them, Activision put Raven to work on a sequel, which came out almost a year to the day after the first game. Smartly making use of the characters used in the first game, X-Men Legends II: Rise of Apocalypse had the X-Men join forces with Magneto and the Brotherhood to combat the greater threat of Apocalypse. 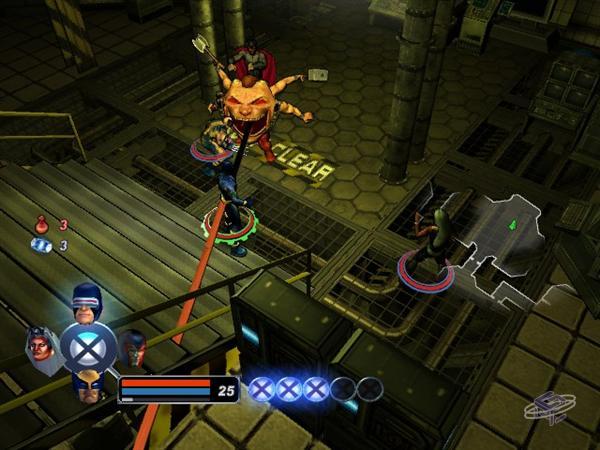 But they would have to go forward without Lipo, who left Raven Software’s Wisconsin home to see more than the state he grew up in (he’s now located in Seattle, with experience working on This is Vegas, Bioshock Infinite, and the Dead Space series. Currently he’s working on VR games for Oculus platforms). He left Raven proud, though. “The team totally rocked it [on X-Men Legends II and Marvel: Ultimate Alliance]. I loved all the new characters, so many of them,” he said. “I mean, Moon Knight are you kidding me?!? Holy cow.”

Aaron SanFilippo was new to the games industry when he joined the staff of Raven to work on X-Men Legends II. “I was just blown away at how efficient and skilled the team was,” he recalled. “As I understand it, X-Men Legends 1 was a game that took a few years to really come together into a formula that worked, but the team knew exactly what they wanted out of the sequel.” 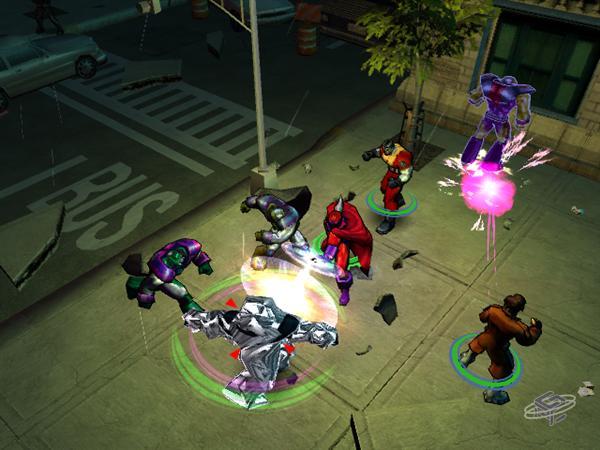 Broadening the scope of the world, the sequel journeyed to more well-known locales from series history, including Magneto’s utopia Genosha and the primitive Savage Land. The co-op multiplayer was available during virtually every mission this time around and the whole thing could even be taken online. At least as long as you had a platform that actually let you play more than two games online; so if you wanted to play online, you couldn’t do it on GameCube.

X-Men Legends II was excellent, doing the right things that sequels should do, as it was still extremely familiar but also added a lot more character, enemy, and environment variety. Reception overall was similar to the original, though some notes seemed to insinuate maybe the wonder of dungeon-crawling X-Men was wearing thin. If only there was some kind of way to, I don’t know, ultimately boost the scope...

The Ultimate Alliance of Marvel Heroes