The laughs are live this time.

Iwata - I was in a meeting at the HQ in Kyoto until 2 and jumped on a bullet train and just arrived not too long ago. Today we’d like to do “Iwata Asks Live”.

In actuality this probably won’t be very different from the “Iwata Asks” you can find on the home page, but we look forward to showing you just what it’s like live.

To that end, we were wondering just what the theme should be for today, and it turns out that “Animal Crossing: City Folk” just came out, so we decided to enlist the help of two of the development staff that handled that title.

And with that, let’s have some introductions.

Eguchi - I’m Eguchi, the producer of “Animal Crossing”. I’ve been working in the Information Development Division for just over 20 years. Recently I’ve been involved in the creation of “Wii Sports”, “Wii Play”, and even “Wii Music” with Minamoto-san and Tezuka-san.

Iwata - It looks like the mic is a bit far - you should direct it towards your mouth.

Nogami - Ah, actually it looks like the switch wasn’t on (laughs). 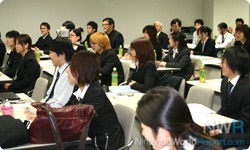 Nogami - I’m Nogami, also of the Information Development Division. It’s been 14 years since I’ve first joined the company. After handling the 2D action games “Yoshi’s Island” and “Yoshi Story”, I’ve been making “Animal Crossing” ever since the N64 era. I was originally a designer, and am now a director.

Iwata - Your involvement in the game seminar.

Nogami - Oh, right (laughs). Although it was different from the Game Seminar we’re holding today, I was originally an attendee of something called the “Nintendo Dentsu Game Seminar”.

Iwata - So you’re a senior to all of these attendees!

Nogami - Furthermore, I’ve been an instructor at these game seminars for 4 years.

Iwata - Nogami-san is an incredibly warm person, so I think he’s going to give all of you some great advice.

Nogami - Indeed, I look forward to helping you all out.

Iwata - Now then, it’s been quite a while since the birth of “Animal Crossing”. Firstly I’d like to start with what the impetus was, and how you began to make the game. Just who was it that originally said they wanted to make this kind of thing?

Iwata - It was a peripheral for the Nintendo 64. The DD in 64DD was an acronym for “Disc Drive”. We wanted to make games using magnetic disks. These days hard disks can hold hundreds of gigabytes, but the DD was only 64 megabytes - smaller than today’s SD cards.

Even so, back then we felt we would be able to write a lot of data, and if we could leave a massive amount of backup data, we felt that maybe we could change games, and so that’s how the 64DD was made.

*1 64DD＝Nintendo 64 peripheral released by Randnet D.D. Service began in 1999 but was discontinued the next year. 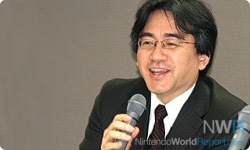 Eguchi - Right. The idea for “Animal Crossing” began with the idea that we could use the 64DD to write a massive amount of save data to make a kind of game that hand’t ever been made yet. At that point, the theme that I considered was “playing with others”. The beginning of that design was that you’d have this RPG like world in this massive field, and multiple people would enter, and your play would affect the other players.

That’s when I wrote a simple 2 page design doc on A4 size paper. Titled, “Proposing a Communication Field”, based on that I conferred with Nogami-san and gradually began development.

Iwata - Since this is a “Game Seminar”, I’d like to direct this discussion towards “How to Make a Game” - so what’s the first thing you decide on?

Nogami - It’s “what do I want to do to play”. In other words, the proposal here was creating a field for communication where one save file would include multiple different pieces of data.

Iwata - When Nintendo 64 was released people started saying, “Network games will be the next big thing”. While that would certainly be interesting, the Nintendo 64 was the first system to have 4 controller ports, so we thought first, let’s allow for 4 people to play together in front of the TV, and so we moved forward with titles like “Mario Kart 64”.

Within that, what Eguchi-san and co. were trying to do was a little different. They wanted a game where multiple people could play one game asynchronously.

Iwata - Why did you want play to be asynchronous?

Eguchi - At the time I was very busy with work, and there was no way for me to play games together with my family.

Iwata - By the time you get home the kids are already asleep. There are times for game developers, particularly when development is hitting its peak, that playing with the kids just isn’t feasible.

Eguchi - I was sad that I couldn’t play games with my kids, even though I knew it would be fun. From the beginning my idea was that, if this is the way it’s going to be, maybe there’s something we could do where someone in a similar environment to me could come home late and play, which would some how overlap with what the kids had done.

Iwata - Specifically what kind of structure did you plan on to make this kind of asynchronous play?

Eguchi - For instance, say the kids were adventuring in a dungeon during the day and made it part way through, but then something happens where they can’t move any further. Then, some trace of that status can be left and then when dad came home at night he could use the information the kids left as a hint and clear the dungeon, and proceed further. I wondered how that kind of relay-type-play would be.

Eguchi - There are lots of RPGs where you become the hero, but in the game that I was imagining the player was powerless. So I thought, ok, what the player can’t do on their own, they could borrow the power of animals to overcome. That’s the first time the idea of animals came up for this project.

Iwata - Finally we come to the animals (laughs).