Tons of downloads, including a free to play title from Sega, are coming to Nintendo platforms! 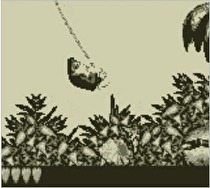 Even though Game Boy Advance games are coming to the Wii U this week, there is at least one other title that gamers in Japan can look forward to on the Nintendo 3DS. Donkey Kong Land, known as Super Donkey Kong GB here, was originally released on the Game Boy in 1995 and is a follow up to the popular Donkey Kong Country on the Super Nintendo. Land features four worlds and sports similar gameplay mechanics to the console title. Gamers can play as Donkey and Diddy Kong and can even occasionally use animal buddies Rambi and Expresso the Ostrich.

As was mentioned above, Game Boy Advance titles are coming in full force to the Wii U starting on April 3. The titles available in Japan are largely the same as what is being released in the West with exception of a few titles - Super Mario Advance 2: Super Mario World and the compilation Advance Wars title featuring both Advance Wars 1 and 2.

Also, Initial D Perfect Shift Online, an online free to play racer from Sega for the 3DS, also releases today. If you’re into anime, racing, and free games, this could potentially be the game for you! For a complete list at all of the releases this week, check everything out below!

DKL is a bit odd since the DKC games were removed from Wii VC (at least in the west) a few years ago. This may be the best way to play it graphically (save Super Game Boy or GB Player) yet.

I was sad that they removed DKC games from Wii VC before I graduated from college and was in a position to buy them. Boy do I hope we get Donkey Kong Land this week. I'll snag that without hesitation. (also hopefully this means that getting DKC on Wii U isn't out of the question)

I've been playing a lot of Donkey Kong Land over the past week and I'm really enjoying it. It's my first time with it and it's just as fun and challenging as the SNES counterparts.