Musings on the New StreetPass Games

The Mii Force needs to take out the Gold Bones or something. 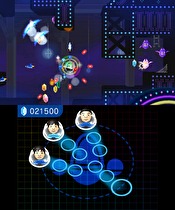 Scott Thompson: Love this one. Love, love, love it. To me, this is such a smart implementation of StreetPass, and it feels like Candy Crush meets R-Type with the way it uses the Miis you meet to power your ship and act as a health bar. I wish all the Miis you have wouldn’t be dismissed after a single level, but regardless, I really adore this one.

J.P. Corbran: This is the only one of these games I’ve bought so far, and I am absolutely in love with it. This is a legitimately great little side-scrolling shooter that I’d be sinking just as much time into even if it had nothing to do with StreetPass. Probably more time, actually, as the infrequency of StreetPassing here is forcing me to resort to using tons of my hard-earned play coins to play, and between this and Animal Crossing those are running out faster than I can replenish them.

Neal Ronaghan: I totally would have bought this as a legitimate game, and it makes me want Good-Feel to go make the next Star Fox or something. My major issue with it is what you guys touched on, it requires a lot of StreetPasses to be doable, as the later ones become very hard with a small amount and your Play Coins can disappear quickly across all these games. But still, it’s an awesome, inventive side-scrolling shoot-’em’-up. It’s fantastic.

Becky Hollada: I have to say I was sold on this game the second I got the Mii Force helmet. I'm a huge Star Wars geek, so getting a helmet reminiscent of an X-Wing pilot's sent me into fangasms. But the game soon proved itself too. This little side-scrolling, Star Fox-esque adventure was tons of fun and easy to handle, even though rotating my laser took a bit to get used to. Like everyone else, I could easily see myself buying this game as its own title, but was sad to see it limited by my lack of Streetpasses and play coins. I can imagine people with ample Streetpass opportunities having no complaints about this one.

Andrew Brown: Considering my last side-scrolling shoot-‘em-up title was Parodius back on the SNES, this game appeals to a nostalgia that I’d forgotten I even harbored. I’d say it’s the most challenging of the new StreetPass games, though it never reaches the difficulty of today’s bullet-hell titles. The levels are completely passable with a single StreetPass, but be prepared for a tough time if you go in with one shooter. Retro awesomeness.

Guillaume Veillette: The game is a truly good shooter in its own right, full of smart features such as the ability to spin the direction of your weapons around you ship and full of opportunities to use them. That said, more than for any of the other new StreetPass games, your enjoyment of Mii Force will probably be directly proportional to your capacity of getting a good number of StreetPasses every day. I’m also not a fan of some of the trial and error aspects of the game (for instance, some treasures can only be picked up if you have the right weapon type). It’s not ideal in a game made to be played once a day. Don’t skip the cutscenes, as the dialog is always hilarious.

I've got a collection of Capcom arcade games on the PS2, almost all of the shmups have a similar spinning shooter mechanic as Mii Force does. Also MF even has the bubble wave weapon from R-Type!

Very nice read.  I've been wondering about these games but there doesn't seem much reliable info out there.  From the sounds of it I don't get enough street passes so I'll limit myself to Monster Manor until some new idea is cooked up to make the streetpass/play coin concept work better in most of the US.

Mii Force - Probably the strongest game of the four, but it's one that I save for meets where I have 6-7 passes for the sake of balance.

Warrior's Way - Actually ended up in my usual Streetpass rotation along with Puzzle Swap and Find Mii II, though I wish I could figure out how my colleagues ended up with over 100k strong armies.

Monster Manor - I think I'm hitting the wall on this one and I'm only on the 3rd floor. I've got a good weapon now, so I hope things will get a little easier.

Mii Force - Probably the strongest game of the four, but it's one that I save for meets where I have 6-7 passes for the sake of balance.

Warrior's Way - Actually ended up in my usual Streetpass rotation along with Puzzle Swap and Find Mii II, though I wish I could figure out how my colleagues ended up with over 100k strong armies.

Monster Manor - I think I'm hitting the wall on this one and I'm only on the 3rd floor. I've got a good weapon now, so I hope things will get a little easier.

I'm a big fan of these games- except Flower Town even though it does seem to have the most depth out of all the games. I really really like Mii force, but I beat it very fast and I'm still working on the others. I've really come to enjoy Monster Manor the most because there are a ton of weapons and items to use and there are neat ways to earn them. Lastly Warrior's Way is cool, but it's for one who gets a ton of Street Passes. I've made the least amount of progress out of all the collection, but I still like it.
The only huge complaint I have is that it now takes a while to get through Street Pass checks and it's taking away from my Animal Crossing time in a serious way. Seriously it took me about 30 minutes to get through 7 passes I got today. I don't know what people are going to do at conventions.

Personally, I like Flower Town. You can "fast forward" the talking by holding down the R button on top and get through the watering quickly that way too. What I don't like is you can't buy seeds for plants you've seen but haven't yet grown.
Monster Manor is my second favorite. Mii Force and Warrior's Way I play but don't care for. The first the controls are too hard, the other because it takes forever to build your army when you don't get many street passes. (I'm lucky to get four a month.)
What I wish is that once you purchase these games your max coins a day would increase. I don't think 10 coins a day is fair if you've shelled out money for extra games. They should increase it by ten for every game you buy.