Two games about punching bad guys with Batman, two about the easy life - and hey, Sonic's here too!

Rocksteady’s blockbuster Arkham series will soon be joined by a prequel, courtesy of Warner Bros Games Montreal. The game is set for a worldwide release on October 25 for the Wii U and will be joined by the stylized Batman: Arkham Origins Blackgate for the 3DS on the same day.

Arkham Origins is set several years before the events of 2009’s Arkham Asylum. This installment follows a relatively inexperienced Batman as he faces certain villains for the first time. Black Mask, a powerful crime lord, has placed a bounty on Batman, luring out famous assassins to take out the Dark Knight on Christmas Eve. An uneasy relationship between Bruce and Alfred will also be explored as their views and interests clash throughout the story.

Although most gameplay will be similar to the previous titles, there is renewed focus on Batman’s detective skills. His detective vision can be used to scan crime scenes for clues, enabling him to rebuild scenarios into holograms that can be analyzed from different angles on the Batcomputer. Once all the scenes of a crime are analyzed, Batman will narrate a rundown of the event.

Smaller additions will also appear as Batman explores both Old and New Gotham. The Batwing plane will permit a fast travel system around the city (sometimes disabled by enemy towers), a remote claw that hits two targets objects together will be introduced, and walled points can be tethered together to create a tightrope. Player’s efficiency will be monitored by a tracking system which earns achievements. The radio scanner supports two types of side missions, “Crime in Progress” and “Most Wanted”, that enable Batman to improve his reputation by helping the police and by stopping smaller criminals. A new enemy type, martial artists, who can counter Batman’s own counter attacks, will further complicate matters. 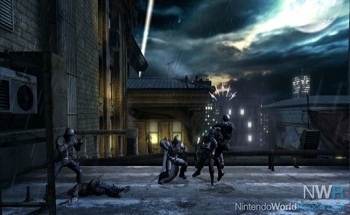 They say you can't go home again, but in a way, the developer of Batman Arkham Origins: Blackgate, Armature Studios, are. Headed up by former Retro Studios senior staff, the studio is returning to their Metroid Prime-esque roots in this 2.5D Batman-starring Metroidvania.

Blackgate is a sequel to the Wii U Arkham Origins title, and brings that game's combat sensibilities to a 2.5D adventure. We still don't know that much about it, but with a playable demo likely to be at E3, we'll be able to tell you way more about Batman's origins and Armature's potential future. 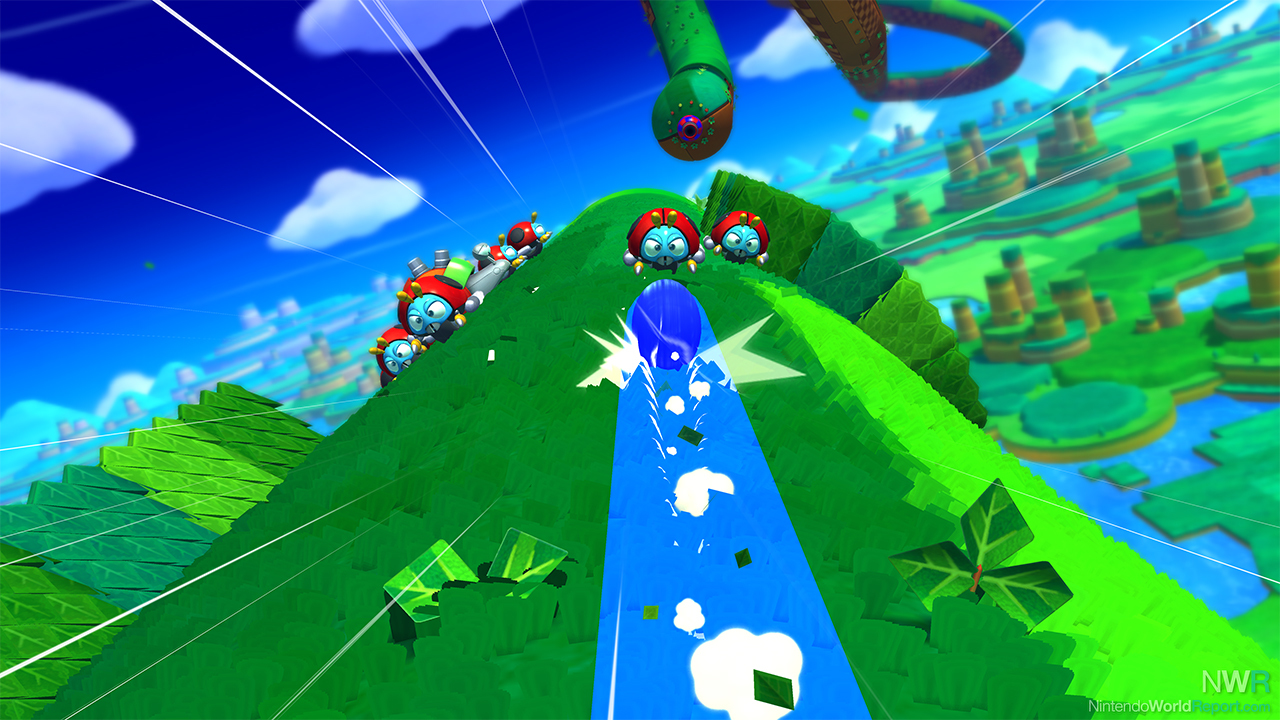 Wait, Sonic the Hedgehog is back? At what point did he leave?! In fact, it feels like Sonic has always been hovering at the periphery of the modern era, constantly trying to translate his cherished days on Sega Genesis into the third dimension, with mixed results. But when it comes to outstanding 3D platforming, there are very few better inspirations to draw from than Nintendo's Super Mario Galaxy games, and based on all that we have seen so far of the blue blur's latest title, Sonic Lost World, there is more than a touch of influence from Mario's space adventures.

Much like Galaxy, Lost World appears to be taking a physics-defying approach to its levels. In the single trailer released as of the time of writing, Sonic can be seen racing around planetoids and spherical land masses, and gravity changes as he runs along vertical and upside-down surfaces. It seems like Sonic is normally challenging enough to follow when he gets going, let alone when all this disorientating planetary business is going on; however, a new gear-style control system enables the player to dynamically adjust his maximum speed with the press of a button. Suffice to say, this could well be a welcome, long overdue addition to 3D Sonic the Hedgehog.

As part of the three-game partnership between Nintendo and Sega, Sonic Lost World is almost guaranteed to get some time in the spotlight at the Nintendo Direct on June 11. Sonic fan or not, this is definitely one to keep an eye on during E3.

Little information has been revealed about the upcoming 3DS game from Harvest Moon creator Yasuhiro Wada and for a while it was only known by its codename: Project Happiness. Working at his studio, Toybox, Wada brought on the famous Final Fantasy composer, Nobuo Uematsu and Pokémon character designer Atsuko Nishida.

The game takes place in the Harvest Moon universe, but focuses on running a business instead of a farm. After inheriting their grandmother’s shop, the main character moves back to their hometown and meets a magical sprite that will accompany them throughout the game. Players are in charge of stocking, arranging merchandise, and expanding the shop, slowly learning their own backstory throughout the game. Outside of work, players interact with and befriend townsfolk, with the potential to meet over 100 people depending on the main character’s actions. 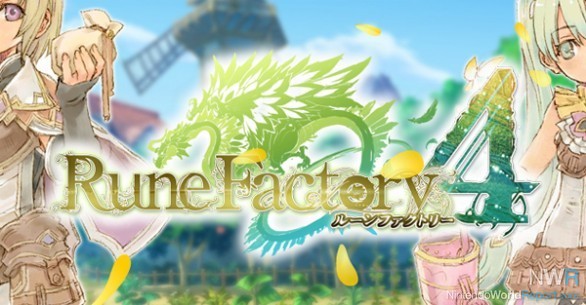 Rune Factory 4 has already come out in Japan to rave reviews, and it’s now the highest selling title in the series. Developed by Neverland Co, XSEED is localizing the simulation/roleplaying game for its North American release on July 16.

This is the first game in the series to let players choose from the beginning whether they want to play as a male or female character. The protagonist then falls out of an airship into the town of Selfia, where they come down with the series’ trademark case of amnesia. Mistaken for a royal who is needed to run the city, things soon get sorted out when the prince arrives. However, he could apparently care less and leaves you in charge anyway. The main plot is divided into two parts, with a third part reserved for a bonus story. As this series is a spinoff of Harvest Moon, social interaction and farming are important to gameplay, however the Rune Factory series takes it further and incorporates dungeon exploration and battles. Defeated monsters can turn into humans you can befriend, and past characters from the series make cameos that can be recruited as members of your exploration parties.

Game producer Yashimoto Hirofumi wanted the game’s theme to be about “passionate love, sweet marriage” and so expanded aspects of drama and the types of dating events. Players are given a choice of what direction they want to take the game in, with new elements like a request system, the ability to talk to dragons, long term relationships and slumber parties added. The game has also been bumped up to 60fps to make gameplay smoother and response to controller input immediate.

Rune Factory 5 has already been announced due to 4’s Japanese success, though no release year has been announced. It will be interesting at E3 to see how game mechanics have changed as this is the first game in the series to be released on the 3DS.

I expect a very good first party showing. I'm more interested if Nintendo pulled a rabbit or two out of their hat and secured some big third party games like Grand Theft Auto V and Metal Gear Solid V: The Phantom Pain. I would be very impressed if Nintendo convinced Konami of a (late) port of Castlevania: Lords of Shadow 2 since David Cox already said no. I'd wait, especially since the end of this year is going to be insane in the membrane with jawesome games.

I haven't really thought about it, but there are actually a lot of games in that list that I'm interested in, and will probably be picking up.

I expect Sony ad Microsoft's presentations to be nothing more than glorified stand up comedy routines with Nintendo stealing the how and causing Wii U sales to spik 400%.

that wouldn't take much...

I expect to see Wii U games.

I'm trying not to expect anything, I don't want to set myself up for stuff that doesn't happen or turn out how I want.

There are already a ton of great games for the 3DS! Yes, go buy one!

And I just hope we get more than 3 surprise games, 1st or 3rd party. Retro will count as one, GTA would honestly be enough from 3rd party. And Nintendo need to pull something out of its hat.

And a bit surprised Wii Fit U was not listed. You guys really don't believe Johnny Metts crazy theory, do you?

I just never allow my handhelds to shine to the potential that they could. I have a DS and DSI, more games for it then I've had for any prior consoles, and only finished half of them. Some I haven't even played.. :/

I for my part am going to jump into the freezing cold water of predictions and will state that Retro's new project will feature him: http://nintendo.wikia.com/wiki/Takamaru

Why? Well... he's been featured in two Wii games (Captain Rainbow and Samurai Warriors 3) and got his own section in Nintendo Land. That might mean nothing, but remember the last time Nintendo brought a character believed to be long gone back to a game? Remember Pit's return in SSB Brawl? He got his own game a few years later.

I for my part am excited about E3, but not in a sense that I expect a big surprise within the next few days. I'm excited just because it's E3.