My dad is a professional dry cleaner. 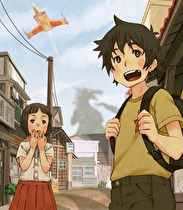 It's another semi-busy week for the eShop in Japan, with a few big downloadable titles hitting the digital spectrum. Japan is finally getting Freakyforms Deluxe, a title available in the West for months, along with Dillon's Rolling Western: The Last Ranger. The second downloadable title for the Wii U in Japan, Othello, is here thanks to Arc System Works as well. The Guild Series is also featured in a major way, with short interviews with the creators of each title and the opening video for Monster's Come Out on Fridays. For a full look at what's available, check out everything below:

The week is a little light on video content, with new gameplay footage from this week’s Virtual Console titles, Sky Kid and Ripple Island. A few new preview videos are also up for Chari Hashi (a 3DS runner, biking game), an 8-bit-like action 3DS downloadable game called Majyo to Yūsha (Witch and Hero), the NicoNico video application on Wii U, and a new Detective Conan game for 3DS. There are also some commercials for Tomodachi Collection and an English learning game called Kippa no Eigo Kyōshitsu (Kippa’s English Classroom).

Some of the coolest things to hit the eShop this week were a few special interviews with the creators of the latest Guild02 titles. In the interviews, the main people behind the games (Monsters Come Out on Friday, Bugs vs. Tanks, and The Starship Damrey) go on for about a minute about the basic ideas behind their creations. It’s nothing too groundbreaking or enlightening, but it’s interesting to hear what they were trying to convey with each experience. Also, the awesome opening video for Monsters Come Out on Friday was uploaded to the eShop—in 3D! It’s hilarious and catchy, with lines such as “My dad works as a dry cleaner,” and, “I love my mom’s cooking.” It’s a weird, comedic take on the fighting monsters genre that is still popular in Japan. Check the interviews and the opening video for Monster's Come Out on Friday below!