Kirby, nintendogs, DLC + cats all show up this week. 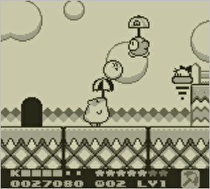 While the arrival of yet another Game Boy Kirby title is some of the best news for eShop enthusiasts in Japan this week, there are a few other bits of unexpected content that hit the digital shelves today. Here’s a look at this weeks releases:

There are a few new additions of videos to the eShop today. First up, Square-Enix put up two new videos for Theatrhythm Final Fantasy. The first video features three different television commercials in which Japanese celebrities play the game and give a few comments about their love for the series. The second video is a sneak preview of the forthcoming DLC for the game that shows a few seconds from each of the tracks (you can see a list of the tracks here). Theatrhythm Final Fantasy and the DLC will arrive tomorrow, February 16, in Japan.

There was also an unexpected entry in the video library today as Nintendo put together a January 2012 New Downloadable Title Line-Up video. The video goes through and shows short video clips from each of the titles released on the eShop (3DS Downloadable titles, Virtual Console, DSiWare) last month. It’s a simple way for gamers in Japan to see what they could have missed out on in the month of January. Nintendo has put these online in preceding months, and I expect that they will continue this for February as well after the month comes to a close.

Our very own Daan Koopman is the proud owner of Tobidasu Puricula Print Club Kiradeco Revolution, so earlier this week, he went ahead and tried out some of the new DLC for the game. You can read his impressions of the software and the what to expect from future Nintendo DLC in this recent blog post. Though nintendogs + cats also got a demo this week, I can give you a quick and dirty on it as the demo mainly consists of the “living room” section of the game, allowing you to play with pre-selected dogs and cats by feeding them, using various toys to play with them, and even give them a bath. If you want more detailed impressions of nintendogs + cats, check out my nintendogs + cats journal or Andy Goergen’s review.

During the Game Boy era, there were a number of games I missed out on despite having the handheld since the very early 90’s. In all honesty, before Pokémon arrived, I had put most of my focus (and my extremely limited funds) exclusively towards console games. The original Kirby’s Dream Land was a game that I was familiar with around the time of it’s release, so when I heard that the game had a sequel, I was definitely up for playing it. With 400 yen hardly being a barrier, I picked up Kirby’s Dream Land 2 from the Virtual Console.

For those familiar with two-dimensional Kirby titles, you pretty much know what to expect in terms of controls, enemies and so on. The biggest difference in this title is the addition of animal buddies that assist you on your quest. I didn’t get to play the game for very long, but did at least run into the first animal friend, Rick the hamster. Using Rick was nearly identical to using Kirby except you cannot fly, however, now you are able to move a lot faster than you could before. Though I haven’t made it to any ice stages in the game, brief research has showed me that unlike Kirby, Rick can walk over ice without slipping.

If you are a fan of fun (and somewhat easy) platformers, get ready for Kirby’s Dream Land 2. From the little bit I played, it looks to improve upon what made the NES and first Game Boy title enjoyable and then add a little bit more to the experience with the animal companions. While this doesn’t have a release date outside of Japan just yet, I would expect to see it in North America and Europe very soon.