The Timelessness of Fire Emblem Awakening

A 3DS title finally makes the list for expanding the reach of a niche but beloved franchise. 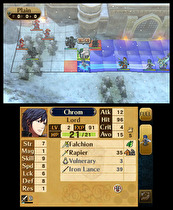 The very first Fire Emblem game was released in 1990 on the Japanese Famicom, and 30 years later that initial release was localized and reached fans around the world. But it was the series’ debut on the Nintendo 3DS that would cement it as both a staple in Nintendo’s stable of franchises and strategy RPGs as a whole. The first entry that I came across was the first to come to North America, Fire Emblem: The Blazing Blade, which was simply titled Fire Emblem for its Western release. While I thoroughly enjoyed the game and kept tabs on subsequent games, Awakening not only renewed my interest in the series, but sparked a turn-based revolution that brought millions of new members to the Fire Emblem club. Ultimately, though, how can we consider a relatively modern game like this to be timeless? Some stories and characters just have that effect on me.

In Fire Emblem Awakening, you take on the role of Tactician Robin, who lends his or her strategic expertise outside of combat in addition to being a powerful mage or sword-user on the battlefield. You can change the character’s name and appearance slightly as well, which makes that avatar feel more meaningful and helps insert the player into the story. And it’s a story you really want to be a part of, filled with strife, trauma, joy, and perseverance. An incredibly colorful cast of characters and the relationships that build among them really add a meaningful emotional weight to the narrative.

Chrom and his literal and figurative families welcome you into their flock, with animated cutscenes adding a persuasive flair. Although the number of these scenes is minimal, the voice acting in each makes them all the more impactful. Even though most of the text in the game is silent, the writing is impeccable and has the ability to elicit all different emotions from the player. The support conversations, for example, bring immense flavor to the overall narrative and are likely to paint one’s overall experience in different ways depending on whom they choose to bring into battle and which characters spend the most time together on the battlefield. From Miriel judging and analyzing Vaike’s training methodology to Ricken following Tharja around like a puppy dog trying to learn curses and hexes from her, depending on how you play through the game, you’re likely to encounter different conversations and interactions between characters 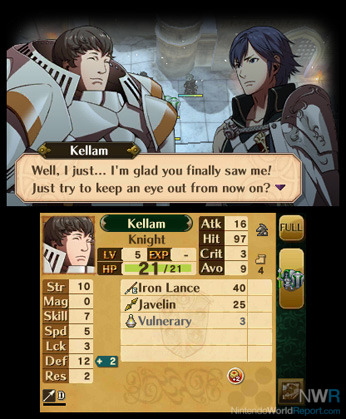 While you’ll almost certainly recruit more characters than you can use, there are a variety of reasons why expanding your army is worthwhile, both from a narrative and a gameplay perspective. At any point after two specific characters reach an “S” rank support level, they may get married and have a child, who grows up and travels from an alternate future back to the game’s present day. As an adult, these characters can be recruited by completing side missions called Paralogues, and these battles add new scenarios in which to earn experience, accumulate gold and items, and of course expand your ranks. The now-grown child character becomes another ally with whom the rest of your army can converse, creating dozens more support conversation opportunities. Therein lies another pivotal hook of Fire Emblem Awakening: the pursuit of new faces and the blossoming of relationships, both romantic and platonic, among your allies.

Fire Emblem Awakening was the first title released in the West to feature a choice between Casual Mode and Classic Mode. In the latter, units lost on the battlefield were removed from the game, making mistakes costly and adding significantly to the challenge of the game, especially for those wanting as many of their characters to reach the end of the game. Expanding the audience for the series, Casual Mode allows defeated characters to return at the end of a battle. While purists may see this option as taking away from the essence of Fire Emblem, ultimately it helped open the door to a series of games and a genre that had traditionally been insulated and perhaps unfriendly to new players. Three difficulty settings in addition to a fourth unlockable one mean that the experience can ultimately be tailored to your preference. I’ve always preferred Classic Mode and the weight that it adds to every decision; losing characters you’ve spent over a dozen hours building up and getting to know is still crushing. Surely the 3DS soft reset function was built for Fire Emblem. 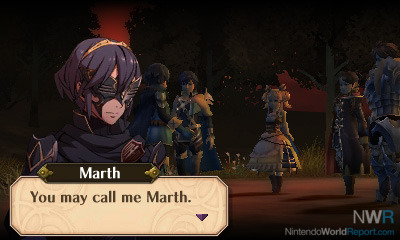 Few RPGs feature permadeath so prominently as a feature, and for Fire Emblem it’s almost a selling point. Knowing that the decisions you make mean life-or-death for members of your army forces you to consider every move, with carelessness almost certainly leading to grave consequences. Love it or hate it, Awakening and others in the series are also very much intertwined with RNG, random-number generation. Weapons wielded offensively and defensively affect your percentage chance to land a hit or make a critical strike, with surrounding allies or paired characters affecting these numbers in a marginal but meaningful way. Even though good decision making and patience generally protect your units from meeting an unexpected end, every once in a while a lone barbarian will land a deadly blow despite only having a 20 percent chance of successfully doing so. Just as often, Chrom or Lucina will strike critically in the face of certain death. Anyone who has played a strategy or tactics-style game knows the old adage: the RNG gods giveth and the RNG gods taketh away.

There have been many eventful years in my life, but perhaps not one so filled with change and risk as 2013. In February, Fire Emblem Awakening launched in North America, and a few months after that I would leave the first real teaching job I had at a private language school in downtown Vancouver. I was taking a risk by giving up full-time work for what would be a temporary appointment at UBC, teaching English in one of their summer language programs. My hope was that making that move would lead to something more permanent at the same university I attended for my Bachelor’s degree, or even an opportunity elsewhere. My ultimate goal was a position at Langara College (where I am now), but it would take a series of small moves and fortunate timing to get there.

Much like a Fire Emblem player sometimes has to take risks on the battlefield, so too did I after my temporary summer contract came to an end. Without guaranteed employment with my original school or UBC, I made another lucky leap to a technical school in Vancouver called BCIT, the British Columbia Institute of Technology. I had known that they had their own English language program for international students, and in spite of past applications to openings in said program, I had never even been called for an interview. That changed in the fall of 2013, as I followed colleagues who I had taught with at UBC only weeks before to new positions at BCIT. I’m more than thankful for any role my fellow instructors played in my hiring, but BCIT wouldn’t end up being my final destination of that year, even though I really enjoyed working there. 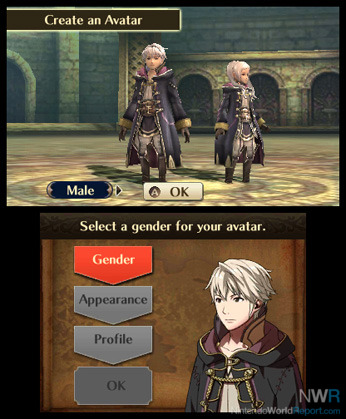 After back-to-back 8-week terms teaching in BCIT’s International Student Entry Program, I secured not one but two interviews at Langara College, my dream job. The mix of excitement and trepidation was dizzying, but I had gained a wealth of experience over the last 12 months, and I was feeling confident. Or I was until about 10 minutes into the first interview. This position was one as a language instructor in a continuing studies program, which wasn’t my first choice but would have gotten my foot in the door. Long story short, I bombed the interview. I didn’t have any semblance of a response to a general question about teaching writing. The story has a happy ending, though. My invitation for a second interview came shortly after, and this one was with the English Department for a faculty position. I brought a brief lesson on semicolons (what else?), acquitted myself well enough, and was offered the job. Like a phoenix rising on Casual Mode, from the ashes of one failed interview I persevered and moved into the career I had always wanted. Maybe it wasn’t that dramatic, but looking back at a year filled with changes reminds me how a combination of fortune and wise decisions led me to where I am today.

I didn’t finish Fire Emblem Awakening until the end of 2013, but like the other events of the year, doing so felt like an accomplishment. I had managed to reach the end of the story without losing any of the allies and friends I made along the way, which is why it took me so long to finish it; I would regularly restart missions to ensure no one was left behind. This endeavour took patience, too, and even though there were many stones left unturned, I was happy to leave those for another day. The following year would represent the efforts of years of work and study, and it was almost fitting that the final video game I completed in 2013 took as long as it did. Awakening and my 3DS were with me through all the long commutes, seemingly endless nights when I needed a break from prepping for my classes, and the minutes between when my head hit the pillow and sleep overcame me. Coming back to the game some years later, I’m reminded not just of the unique characters, engaging story, and satisfying gameplay; I’m also reminded of how far I’ve come in those intervening years.