The Timelessness of Dragon Quest V

The combination of traditional RPG and generational family story lead to an experience for the ages (spoilers ahead).

Anyone who has ever played a Dragon Quest game will be familiar with their strict adherence to tropes and mechanics of the role-playing genre. A hero destined to save the world, inns and shops to purchase items and equipment, turn-based combat rewarding experience points and gold: these have become staples of the mainline Dragon Quest titles. While most of the entries in the series are absolutely worth playing, the fifth one in particular weaves a multi-generational tapestry of narrative and gameplay to create an unmissable, dare I say timeless, adventure.

It took 17 years for a localized Dragon Quest V: Hand of the Heavenly Bride to leave Japan, and this came in the form of a Nintendo DS remake of the Super Famicom original from 1992. A few years before the DS version, DQV also came to PlayStation 2, but that version was never localized either. Like the Super Nintendo before it, the Nintendo DS was a true RPG powerhouse, and the fact that its library could also be played on its successor, the 3DS, meant that six mainline entries would eventually be playable on the Nintendo 3DS. And that’s where I first experienced Dragon Quest V.

In a 2015 Nintendo Direct presentation, it was announced that Dragon Quest VII and VIII for 3DS were finally coming to the West, but the first of which didn’t arrive until September of 2016. This meant that I had a little less than a year to catch up with earlier games in the series that I had never played before. I found the three NES titles hard to get into as a child and less friendly to new players than the original Final Fantasy, so I never ended up finishing them. But Dragon Quest IV, V, and VI were on one of my most beloved handhelds, and I could play them on a Nintendo DS or 3DS, so that’s what I did during the spring and summer of 2016 as I waited patiently both for the localized 3DS titles and Nintendo’s next console, codenamed NX and later revealed as the Nintendo Switch. 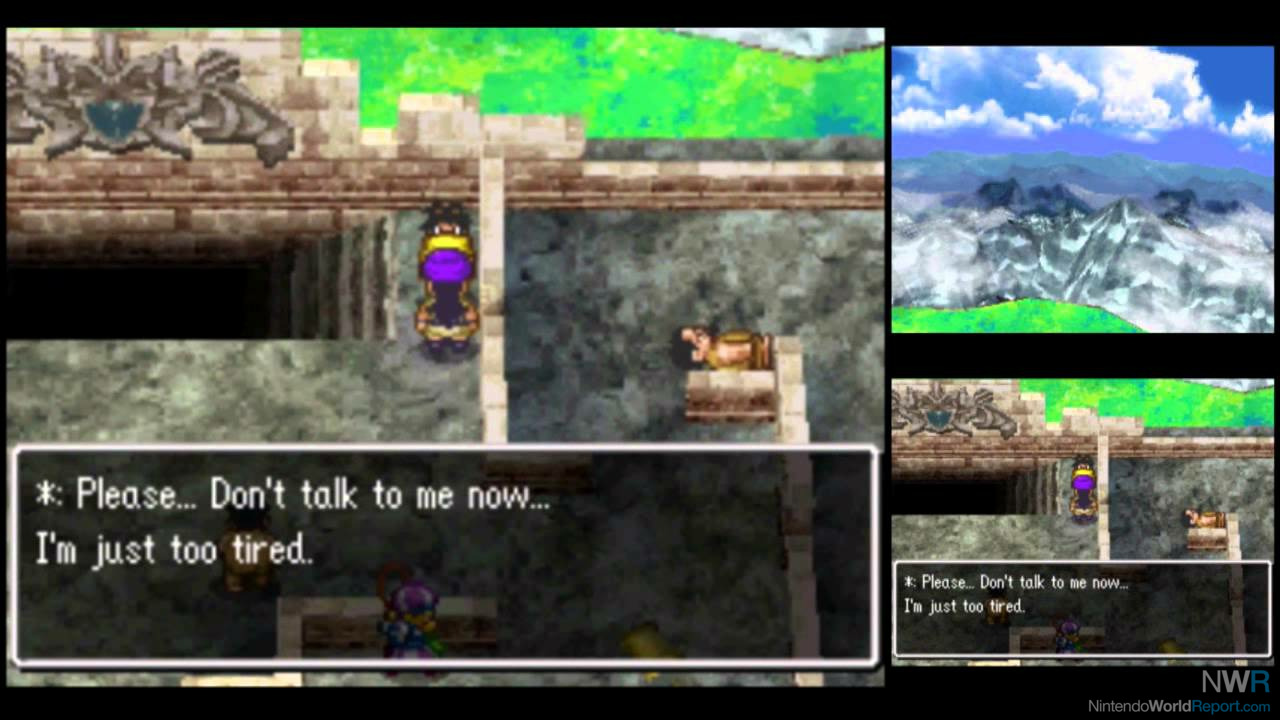 I’ve always been a fan of role-playing games, from Final Fantasy and Zelda II: The Adventure of Link to Mass Effect and The Witcher 3. Even tabletop games like HeroQuest hold fond memories of venturing over to the neighbours’ house, family friends of ours, with my dad for an evening board game session on weekends. There’s no question that the Super Nintendo fostered that love of the genre with hit after hit of glorious turn-based combat, amazing characters, and soulful soundtracks, but I sought out these games on any console I owned. Radiant Historia on the DS, Ni No Kuni on PS3, Dragon Age: Origins on Xbox 360: these and many others are how I spent long gaming sessions, eschewing save points in favour of completing just one more side quest or seeing over one more mountain range. It’s a wonder, then, that the only Dragon Quest title I played at launch would be IX: Sentinels of the Starry Skies. I remember enjoying it, but not quite enough to finish it. Of all the Dragon Quest games I eventually did play, however, it’s DQV that had me captivated like no other.

One of the shining beacons of Hand of the Heavenly Bride is the journey of the Hero, whom the player can name at the outset. He starts as a young boy, toddling after his father, Pankraz, an accomplished and respected warrior. Compared with your father’s devastating blows, you barely scratch the enemies you meet earlier on, but it’s not long into the game when you are without your parental guardian and forced to quest alone and then later with a friend of the same age. The first chapter of the game skillfully walks the tightrope of making you feel both protected and empowered, but also shows that you aren’t impervious to damage. It’s entirely likely that without Pankraz at your side, you’ll have to grind for levels and gold to raise your stats and better your gear, but RPG newcomers and veterans alike are accommodated through the game’s familiar but accessible opening act. 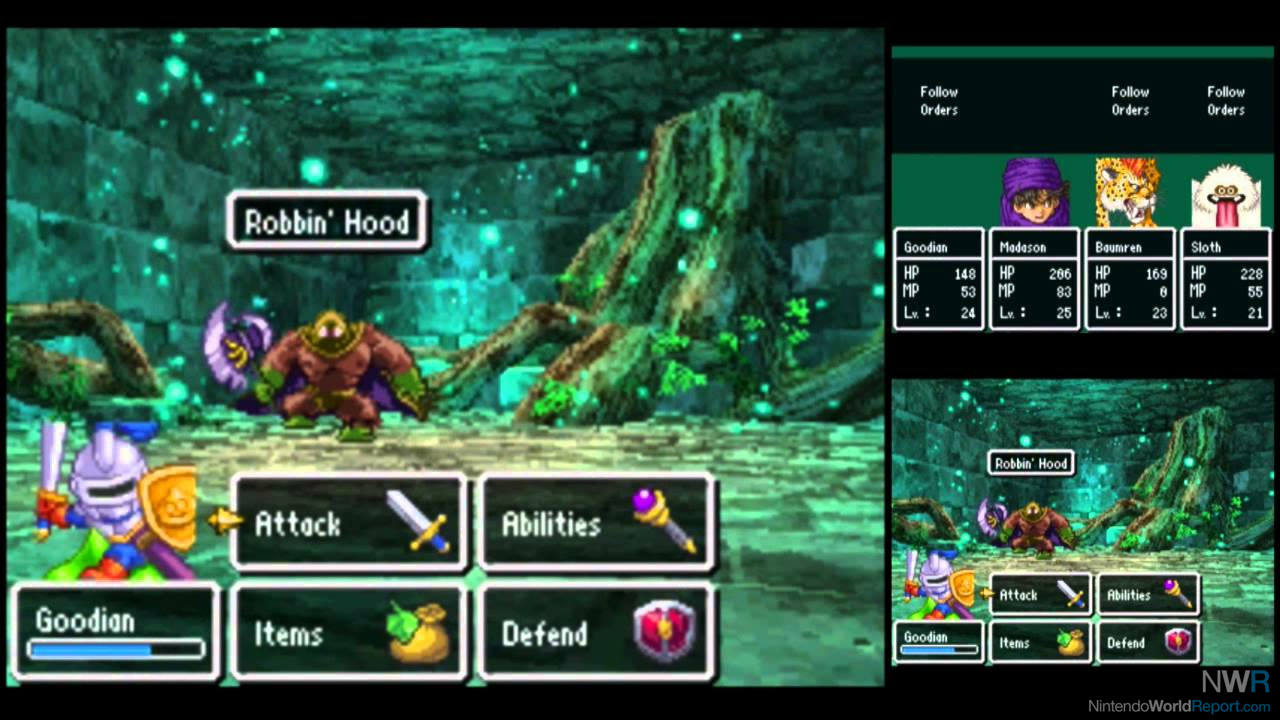 Years pass before the second act begins, and the Hero has suffered greatly in the intervening years. But from tragedy arises the opportunity for redemption, and while the voiceless protagonist can’t use words to elicit an emotional response from the player, his new circumstances and eventual escape from them serve as a compelling backdrop for his triumphant comeback. With the aid of old friends, the Hero eventually reaches a moment where he must make a meaningful decision that impacts both the story and gameplay moving forward: he must choose a marriage partner. Will it be his childhood companion Bianca, the kind and gentle Nera, or the brash and headstrong Debora? I selected the latter for my recent playthrough (a character first introduced in the Nintendo DS version) and found her dialogue to be quite entertaining and eventually endearing as her feelings for her husband begin to develop and shine through. Knowing that you will only be able to choose one of these characters for the second half of the adventure makes the choice all the more interesting.

The final chapter brings the children of the Hero into the fold as another time skip occurs that sees the newborn son and daughter grow into inexperienced but capable youths. Shortly after finding their father and restoring him to health, the group set out to find their mother and eventually their grandmother, the Hero’s long lost mother. The way that Dragon Quest V neatly weaves together the individual lives of characters from three generations makes it a unique RPG, but what also sets it apart is the way in which the main character turns out not to be the chosen hero after all. Instead, it’s his son who claims that title and has the ability to equip the legendary Zenithian sword, helmet, armor, and shield, which you spend a fair part of the game attempting to acquire. The moments later in the game where grandfather Pankraz and grandmother Mada are able to look down upon their flourishing family are heartfelt and add an emotional poignancy to the final dungeon and the game’s ending. 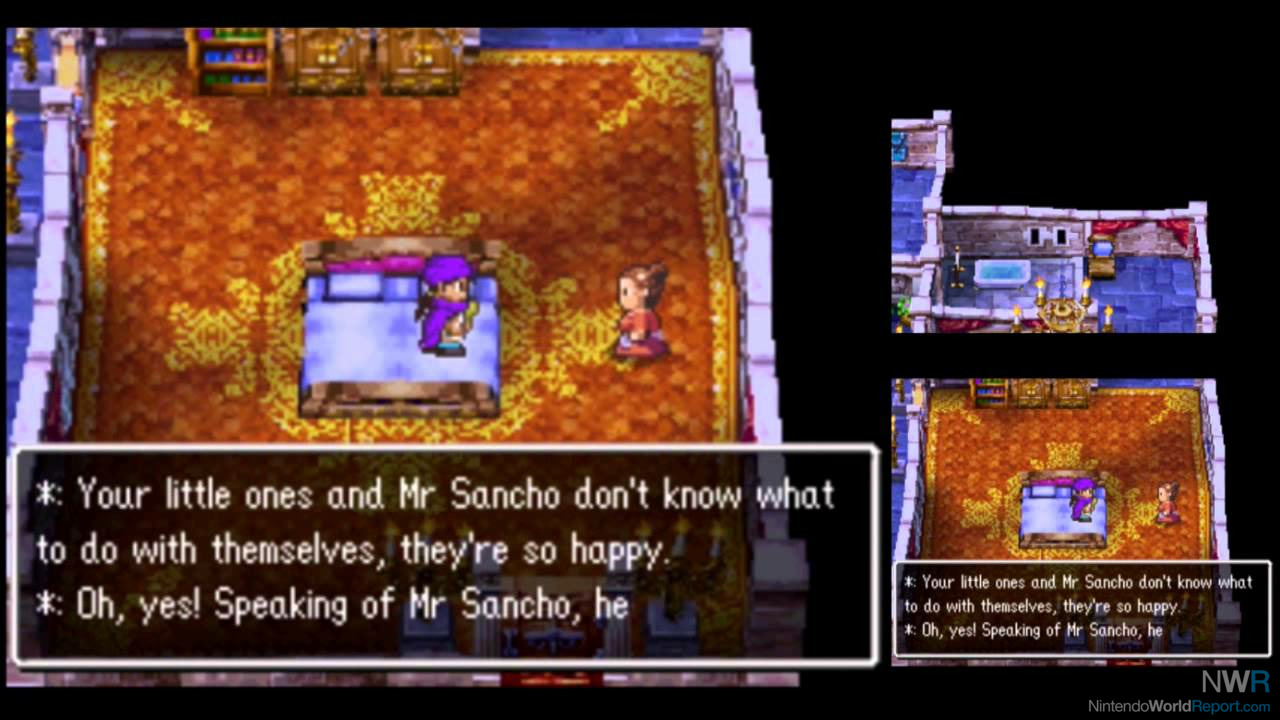 Anyone who has ever played a turn-based JRPG will feel immediately at home with the Dragon Quest combat system, where characters in your party each select an action before taking turns with the opposition to attack, defend, cast spells, and use abilities. Towns and dungeons are plentiful, the former filled with lively NPCs to talk to, the latter filled with treasure, random encounters, and often a challenging boss fight. The gameplay loop of exploring a town, accepting and completing a quest, and then moving to the next part of the story is fairly rote, but it’s also well executed and feeds into feelings of nostalgia and comfort.

From its incredible pixel art to its triumphant music and familiar sound effects, Dragon Quest V has the aesthetic of a classic RPG that has been lovingly made over for the Nintendo DS. Even though attack and spell animations are nothing special, the amount and variety of color on screen at all times adds greatly to this fantasy world and those that inhabit it. The jingles heard when staying at an inn, saving your game at a church, leveling up, or opening a chest are staples of the franchise and make fans feel right at home. 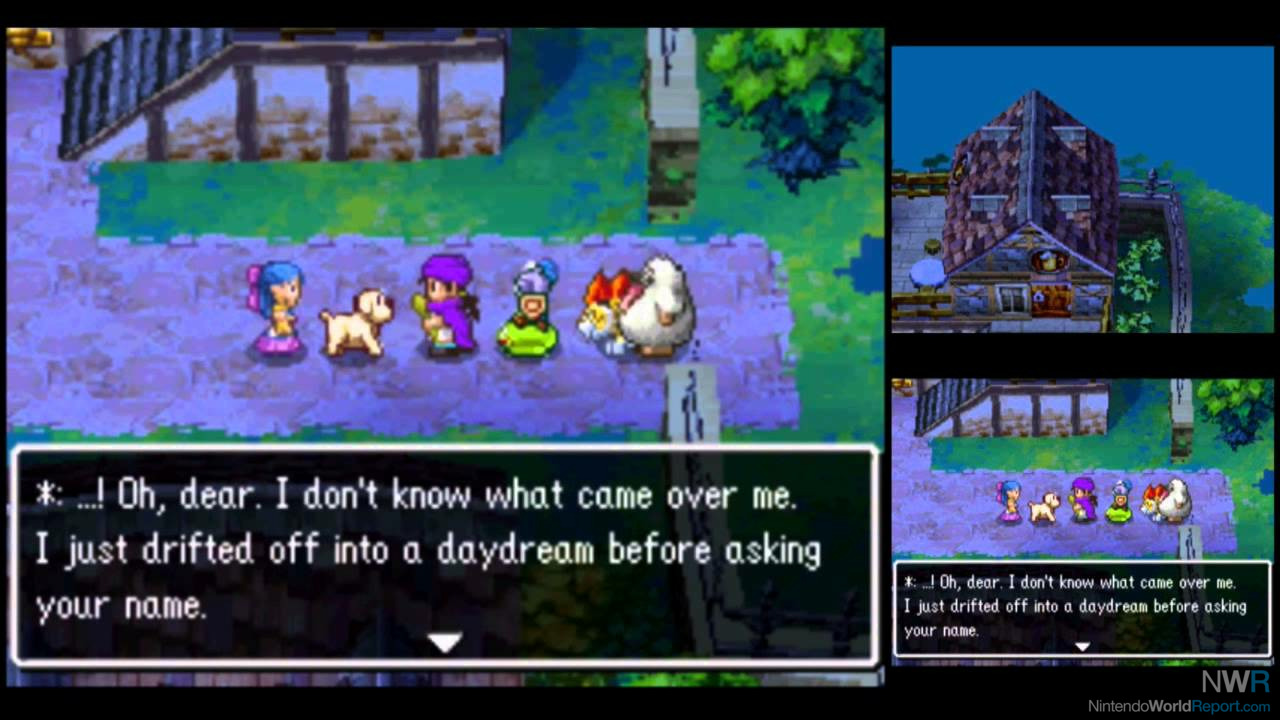 Elements of the Dragon Quest games and Hand of the Heavenly Bride, in particular, ooze charm and whimsy, creating a special flavor that few series, outside of Mario and Zelda, can boast. The dialogue of particular characters and places is meant to represent the size of the world and the uniqueness of those who live there, from Sancho’s Spanish accent to Rodrigo Briscoletti’s Italian. The collecting of Mini Medals to redeem for special items and equipment make rummaging through houses, smashing pots, and sniffing out treasure chests even more worthwhile. You can even try your luck at multiple in-game casinos and board games where you roll a die to make it across the board and earn prizes. There’s so much icing and so many cherries on top of the standard RPG experience, and all of these additions culminate in an experience for the ages.

One of the best parts of Dragon Quest V is the addition of monster recruitment in that you can add almost every creature in the game to your party. Rather than always trying to grind for levels to overcome a powerful boss or deadly dungeon, you can attempt to recruit different monsters with their own unique abilities. The level of strategy added by this game mechanic is immense; some players might even treat it like they might with Pokémon by attempting to catch ‘em all. There are a few instances where you have to have human party members with you, but after monster recruiting unlocks, you can essentially create your own portable menagerie, completely with horse and wagon.

Not every role-playing game ages gracefully, even if later versions of that game end up being more accessible and enjoyable through whatever changes are implemented. Itself a remake, Dragon Quest V on Nintendo DS is an excellent example of an RPG that has stood the test of time: a satisfying genre staple amongst scores of special, obtuse, and esoteric others. You might say that playing a Dragon Quest game is like enjoying comfort food, and if that’s the case, Hand of the Heavenly Bride is your grandmother’s favourite. The one you always request for your birthday, and really any other day of the year. What makes Dragon Quest a formidable and long-lasting series is on full display in the fifth entry. Even if the most recent title, Dragon Quest XI: Echoes of an Elusive Age, is itself a masterpiece, the legendary story of Pankraz and his family has forever etched its mark in video game history.