The Timelessness of Kirby's Adventure

One tough cream puff that I could never stop taking home from the video store.

While Kirby has never received top billing from Nintendo like the Mario and Zelda franchises, its own mainline games and spin offs now number over 30, which means no one is surprised when a new Kirby game is released. Its brand of lighter platforming and charming presentation continue to find an audience 28 years after Kirby’s debut with Kirby’s Dream Land for Game Boy. In some ways, the main games have changed significantly, from adding copy abilities to multiplayer, but the first outing, Kirby’s Adventure for NES, where Kirby gained the ability to steal his enemies’ powers by sucking ‘em up and swallowing ‘em would define the character for decades to come. Even if most Kirby games target a younger audience, they also manage to captivate a wider demographic, and the simple ways in which Kirby’s Adventure accomplishes this feat speak to its timelessness.

The NES would receive games up until the end of 1994, at least in North America, and Kirby’s Adventure would arrive a year earlier in May 1993. A fair number of NES owners were still buying and playing games for that console, even though the Super Nintendo was already on store shelves. The top-loading NES debuted later in 1993 at a budget price, and so it was clear that Nintendo saw value in supporting those who had an NES already and then courting those not ready to make the 16-bit leap. While I only ever had a regular NES console, both my family and my grandparents each had one in their homes, and I had no problem spending my leisure time switching back and forth between Super Mario World and Kirby’s Adventure, the latter of which I would end up renting over and over from places like Blockbuster and Canada’s own Rogers Video.

An absolute highlight of my childhood was sleeping over at my grandparents’ place on weekends. It meant an awesome dinner, card games with my grandfather, and plenty of gaming time curled up in a red, yellow, and blue bean bag chair, one that never should have lasted as long as it did. Usually I would rent a game or two before heading over there for the night, and I can’t count how many times I would bring the Kirby’s Adventure box to the front counter to exchange for the cartridge in a generic plastic case. It made the perfect palette cleanser between boss fights in Final Fantasy IV and adventures through Hyrule in A Link to the Past. Perhaps more importantly, Kirby’s Adventure could be conquered in a night or weekend, and so those feel-good endorphins that flood the system after taking down the game’s final boss were easily accessible. 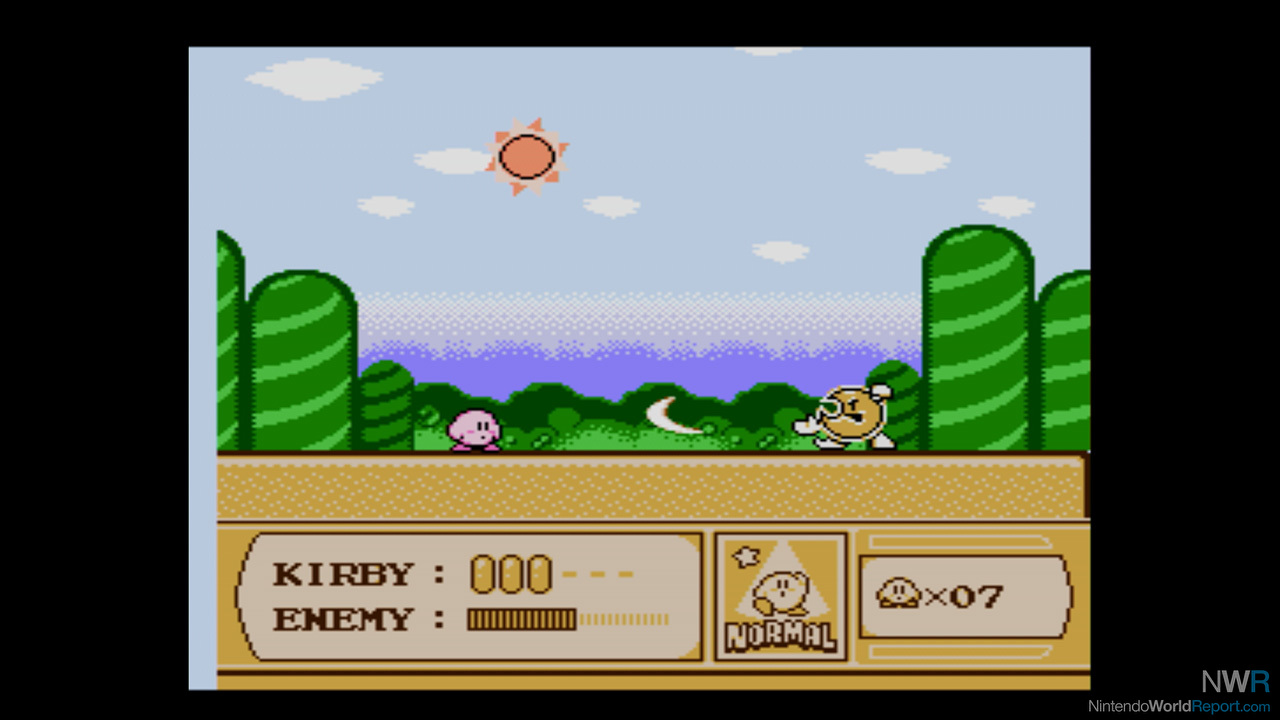 Running and floating through the game again on Switch, courtesy of Nintendo’s online service, I’m reminded of all the seemingly minor elements that make Kirby’s Adventure so darn charming. Across its seven worlds, the difficulty ramps up gradually, but even then, having six hit points and finding numerous health-restoring items means that it can be a challenge in itself just to lose a life, especially for players with platformer experience. Even though each individual stage isn’t overly taxing, they do feature dozens of foes to fly over, suck up, spit out, or copy. Often, copy abilities like Wheel, where Kirby transforms into a blazing-fast tire, or Fireball, where Kirby dashes while covered in flames, are offered to the player just ahead of a section where they will be most effective. You might have access to Wheel just ahead of a straight-line segment so that you can just zoom through obstacles and enemies. You can pick up Fireball just before a rope that leads to a cannon, so that you can ignite the rope, hop in the cannon, and blast off to a secret area. Discovering these minute level design choices is absolutely one of the joys of the game.

Every world includes bonus stages where you can earn extra points and extra lives, and a museum that offers a specific copy ability. Although you aren’t forced to open any of these doors, it certainly doesn’t hurt to constantly have access to the Sword or Laser copy abilities, for example. The bonus areas include a crane game, where you can pick up different sized Kirbys for extra lives; an arena where you can battle mini-bosses and take their power; an egg-catching event where series antagonist King DeDeDe throws eggs you have to catch and bombs you have to avoid; and a quick draw duel where you need to press the A button faster than your computer opponent. Even if the points and lives on offer are fairly inconsequential, the bonus stages over a wonderful respite from the somewhat repetitive main game. 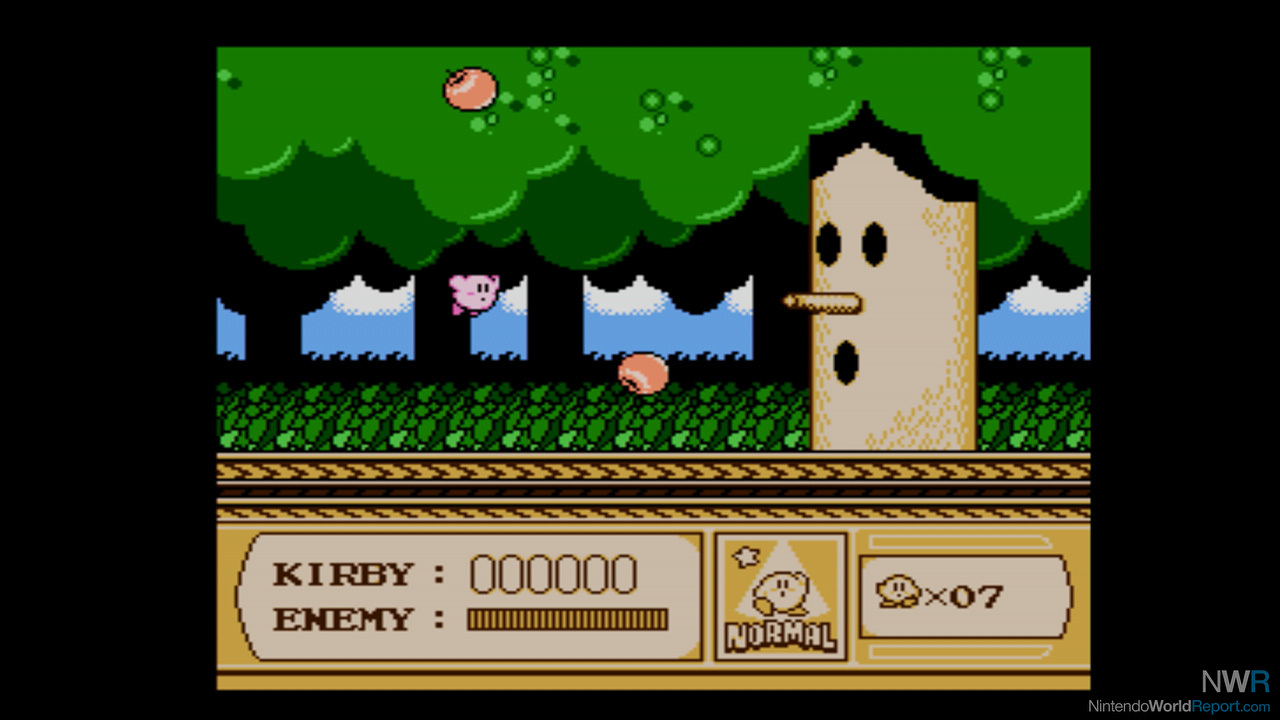 Sometimes repetition can be seen as a bad thing, but with Kirby’s Adventure, it may be part of the allure. The upbeat and cheerful music spurs you forward in every level, and it can feel like reaching the end of every stage becomes a type of muscle memory, especially after completing the game once over. Minor enemies and mini-bosses from early on make frequent return appearances, and there’s a comfort that derives from knowing what your opposition is going to do. That pleasure that derives from the familiar is perhaps the driving force behind the general formula of mainline Kirby games remaining nearly the same. Like I mentioned early, I rented it so often that after I had finished it, subsequent returns to Dreamland were squarely for losing myself in its simplicity and heart. I look forward to encountering Whispy Woods early on when playing Kirby; even if the battle plays out largely the same in every iteration, that cute, kooky tree always makes me smile.

Kirby wasn’t pink before Kirby’s Adventure, nor did he have the ability to steal the powers of his enemies. Ultimately, two of his signature traits came from his second outing, which would go on to be an NES classic. But these alone aren’t enough to make a game timeless. No, it’s the way in which each playthrough feels different since you can blissfully float above pits and other dangers below. It’s the way in which boss and mini-boss fights play out differently depending on what moves you bring to the dance, if any. It’s the way in which secrets can be hidden in plain sight but require that you bring along the right tool for the job, like using Hammer to smash through seemingly indestructible bricks. Kirby games might not be for you, but they were designed for everyone, and this one might still be the purest distillation of what makes the best ones work so well. 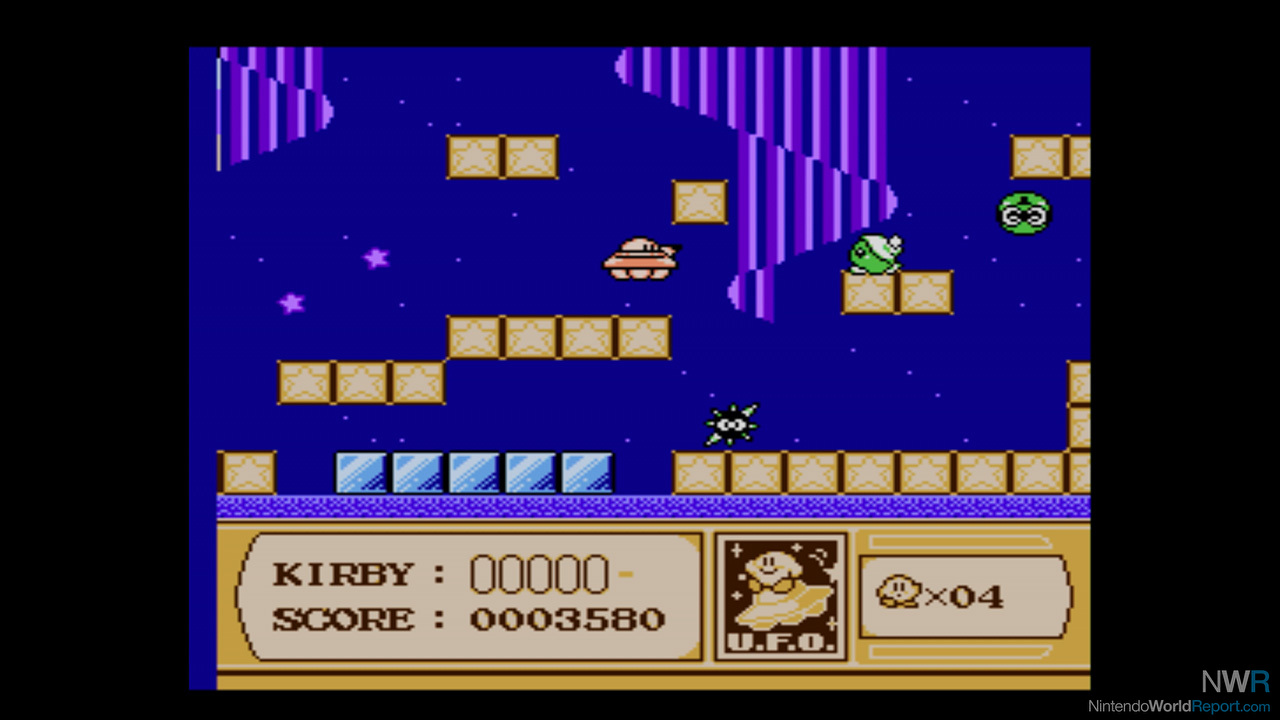 Kirby larger than life underneath the title in red bubble letters all on a blue background. That game box will forever be etched on my mind, and with that memory is attached all of the happy and peaceful times I spent bringing one of my favorite games over to an incredibly special place. Video games themselves can be something we escape into, but they can also represent the moments where we found rest and tranquility with those most important to us. Kirby’s Adventure will always be part of my own adventure: that of growing up.

I just played this for the first time last year via the NES Classic. It is one of the easier games to complete on that mini-console. It holds up pretty well for an NES game. I thought the fight with Meta-Knight was the toughest part. My favorite Kirby game is still Return to Dreamland on Wii.

I just played this for the first time last year via the NES Classic. It is one of the easier games to complete on that mini-console. It holds up pretty well for an NES game. I thought the fight with Meta-Knight was the toughest part. My favorite Kirby game is still Return to Dreamland on Wii.

The Nintendo Switch Online has an SP version of Kirby's Adventure that lets you start with the unlockable Hard Mode, and I used that for my recent playthrough. Definitely a lot tougher of a game to run through with 3 hit points compared to 6.

Return to Dreamland is really good, too! I don't know if I ever finished that one, though.