The Future of 3D Mario

"Where are we gonna go next Luigi?" 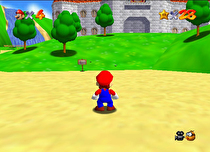 The evolution of 3D Mario has been something that has been on a trend towards achieving a representation of a 2D side-scroller in a 3D setting. This has culminated in the 3D Land/World series of games. But what about the style of 3D Mario that Nintendo had started way back in 1996 with Super Mario 64?

Looking back on Super Mario 64, its performance as a tight platformer is somewhat lacking. The game instead leans more on the side of creating large sandbox environments for players to explore and move around in. At the time this was a revelation for many, it offered a true 3D world with an almost limitless freedom of player expression. But, the game does suffer a little on the side of being a true precision platforming game.

After having played a fair amount of 3D World recently, I have come to the conclusion that I don’t think I will need another Mario in this style, or at the very least, not for quite a number of years. I loved 3D Land and wanted more. I now have that with 3D World, although now I feel that this formula has reached its end point. Any more entries after this I think will begin to feel slightly stale, much like the New Super Mario Bros. series.

So, what’s next then? If 3D world was a combination of 2D and 3D Mario games, favoring itself closer to the 2D games, what if EAD were to go the other way and add more elements from Mario 64 and Mario Sunshine?

A balance needs to be found, I don’t think the slower paced exploration based Mario is what they should go back to fully. I like having very tight platforming challenges, which is what I loved about the fluddless levels in Sunshine.

What I propose would be to expand upon the castle idea from Mario 64 except making it far, far larger. Basically, a giant hub/overworld with its own platforming challenges and exploration. This ‘hub’ would be one giant world to explore, much like the style of the levels in Mario 64. This world would feature various exits to other levels that the player has to discover. The levels themselves would be more linear affairs, something akin to the Galaxy games in terms of structure, although there should be a few larger sandbox levels as well.

The point of this game would be to make a Mushroom Kingdom players can actually travel across, muck around in, and access levels seamlessly. It would be cool to have Mario drop down in the middle of a giant field with mountains to the left, a town in the distance to the right, etc. This overworld could be filled with so much stuff that it would feel like its own level, just on a massive scale. I would also say that basically any level would be open to be played right away too, as long as the player found the entrance, except for the final area.

Bringing back the Mario 64 style of an open sandbox should happen, I just don’t think it should be at the expense of having a tight platforming experience. Creating a level/world out of the level select is a way of doing both at the same time without diminishing either.

According to survey i got and various other interviews Nintendo only sees two paralell roads for 3d Mario to move on:  Land/World style hybrids and Galaxy style linear romps.


I'm more than fine with all variants.

@azeke frankly I am fine with those options as well as long as
a) they scale the mario release schedule waaaaaaaaay back
b) put the brakes on the New Super Mario series.  Get that team working on anything but New Super Mario

I pretty much agree with the editorial. I loved 3D Land and 3D World, but I think that's enough games in that hybrid style for a long time. I've also had basically the same idea about some new large hub area, although I would prefer some star collecting be required to progress to new areas.

And even though it seems the only type of other 3D Mario style they are considering are the "Galaxy games" from interviews, I feel like Miyamoto might just be simply using that to refer to the 3D style of having a health bar/star collecting/no dash button/triple jumping, since they're the most recent examples of that.

I think the best thing whether it goes more sandbox next time or not is just how new and impressive it will be, instead of just being comparable to previous games. 3D World's big advancement was the 3D multiplayer, so whatever is next should be something else that takes it to another level.

Go to GameRankings.com and look at the All-Time Best list.  What games are numbers 1 and 3?  The Super Mario Galaxy games.  That's two of the top three most highly reviewed games of all time.  It should be obvious which direction to go in if Nintendo has to pick only one.

What bugs me is that Super Mario 3D Land/World feels more like NSMB and so the whole thing comes across as the casuals not getting that full 3D camera thing so we have to dumb it down for them.  Don't they already have the NSMB series?  What about those of us who want something a little more complicated and ambitious?  You suggest the idea that Nintendo is dumbing down their series for a more mass market casual audience and the defenders will come out of the woodwork to say that's not the case and that Nintendo provides games for both audiences.  But then why has 3D Mario been changed to be less complicated and more accessible and more like the NSMB series?  It's not enough to have two series, they have to take the one that appeals more to hardcore gamers and alter it for an audience that already has "their" Mario series.

What I want out of 3D Mario is ambition.  That's what Super Mario 64 had that made it great.  It was trying to be the greatest game ever made.  Super Mario 3D World's design was "hey, let's make a console version of that 3DS game!"  It doesn't matter to me what direction Mario takes.  I will trust Nintendo on that provided they reach for the stars.  I just don't want conservative Mario product.

Super Mario 64 was (and still is) one of my top 10 favorite games of all time. But trying to recreate a game that had the success and feel that Mario 64 had is nearly borderline impossible. But if the took it added new and more levels, more items from the past games, with his punching, kicking, and all his other moves from Mario 64, with character choices like 3D World it'd be a step in the right direction for the game. Yeah I know people will have other opinions and suggestions or will disagree with what I've said, but this is my opinion and I stand by it. If Nintendo puts out more 3D Mario games I'm cool with that. So we'll just have to wait and see what they will do with the next Mario game.

What bugs me is that Super Mario 3D Land/World feels more like NSMB and so the whole thing comes across as the casuals not getting that full 3D camera thing so we have to dumb it down for them.

If you really believe that, you clearly didn't get that far in either game because the stages get pretty challenging. They're not remotely for casual players by a damn sight. The camera changed because the entire point of the stages changed. There's typically only one end goal per stage rather than multiple stars. There's really no need to move the camera. I have no idea how you managed to turn this into ammo for your vendetta against casual players.