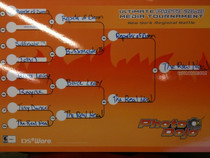 After a 20-minute tournament that was preceded by an hour of DSi camera-fueled setup and lunch, I came out on top of the New York City region. Under the lame pseudonym "The Real Neal," I managed to defeat representatives from GayGamer.net, Maxim, and The New York Post. My fireball, which was a picture of NWR contributor and photographer Lauren Lewandoski, blazed a trail through my foes and to the championship. 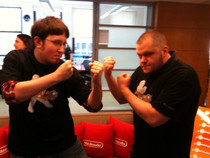 David Edison of GayGamer.net and me right before our first round bout

Next week, I will be flying across the country to Redmond to compete in the finals against the San Francisco and Los Angeles winners for a chance to take on the mighty Bill Trinen for the title of the Ultimate Photo Dojo Champion.

Stay tuned to Nintendo World Report as I detail my exploits, train for the tournament, and explore the undiscovered (for me) state of Washington and Nintendo's fabled headquarters. Hopefully it'll be as fun as the last time we were there!

This is fantastic news, and looks like you had a great time. It's kind of weird how Nintendo went all out for Photo Dojo, doing tournaments and the like.

It's especially weird when you consider that they're doing it for a game they're giving away for free.

Don't forget to plant the NWR bugs and cameras all over the Nintendo HQ, we need the insider access for all the exclusives we are gonna be having from this point on.

Oh, and ... when you beat Bill Trinen, offer him mercy for an exclusive peek at the 3DS that you can only reveal to us NWR Platinum members.

Make a bet with Trinen about the treehouse translating Mother 3.

BTW, i've actually seen 2 commercials for this game today on Cartoon Network. This is the first time i've seen any commercial even mention WiiWare or DSiWare (or Virtual Console), so I was surprised to see one mention a game that is free.

If they can get you to get online to download something that is free (which a lot of people will put in the effort to do), then that also means that there is that many more people connected online that have been to the DSiWare shop and may return for something that cost money.

I couldn't find the thread that has Neil winning the tournament, but I just wanted to post the link to this week's Nintendo Week where he is shown beating Bill Trinen.

By the way it's Z+A for the long jump, isn't that right Allison.

I couldn't find the thread that has Neil winning the tournament, but I just wanted to post the link to this week's Nintendo Week where he is shown beating Bill Trinen.

By the way it's Z+A for the long jump, isn't that right Allison.

Thanks for reminding me that I need to cull the tons of pictures Lauren took and post them. :)

Funny that Craig Harris didn't mention being defeated by you on the IGN NVC podcast.

Funny that Craig Harris didn't mention being defeated by you on the IGN NVC podcast.

That's because Craig Harris didn't make it to the finals.

Oh, I thought he was the other guy who went there.

I think there was an episode of Newscast where I mentioned that Craig Harris won the San Fran one. I had my facts crossed.