Help Me, I'm a Gachapon Addict! 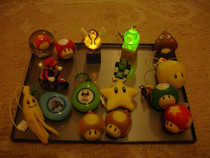 I started noticing that these "toy egg" vending machines were everywhere in Japan, not only in arcades and videogame stores, but even supermarkets and shopping malls.

More often than not they were tiny figures or toys from various animes, that most people outside of Japan have probably never even heard of.

However' one out of every twenty or so I'd spot a rare Nintendo-related treat.

The beauty of them is that they aren't cheap-looking knock-offs; they are Nintendo approved, and therefore look exactly like they should (most of the time).

It started off innocently enough: a Super Mushroom-shaped key-ring for my house keys. A valid purchase, but one that quickly led to the desire to have another for my bike key, my spare key and anything else I could think of.

So next came the Golden Mushroom, Mega Mushroom, Bullet Bill and the banana skin, and before I knew it I'd gotten the whole set. I guess I was pretty lucky that I'd got a different one every time I dropped my money in and turned the dial to get my fresh egg of goodness.

It's not always like that however, as I quickly learned with my next obsession: magnets.

First it was an awesome-looking superstar to hold a couple of photos on my fridge, but this again soon led into wanting the whole set; however, this time I wasn't so lucky with my prizes. Now every time I go to get some milk, I'm faced with six angry-looking Bullet Bills to remind me of my failure.

But I didn't stop there. After that it was Mario Kart miniatures to celebrate the release of Mario Kart Wii. In my attempt to get a full set I ended up with two Marios and three Bowsers.

Then something hit me, like a rebounding power ball to the face. The other day I bought a mini-replica of a Nintendo DS complete with a tiny DS cart. I just paid 200 yen ($2) for a thumb-sized version of a console I already own, but actually does nothing at all...what the hell am I doing here?!

Heck, I even considered dropping however much it took to get the complete collection of miniature games to slot into my tiny handheld pretend system.

Now I'm not sure if I should reduce my gatchpon habit to one a month, or just go cold turkey and stop looking at gachapon machines altogether.

Then again, I did see an awesome-looking mobile phone screen wiping cloth in the shape of a Goomba the other day...

I don't blame you, I want the goomba cloth :D

Stuff like this makes me wish I lived in Japan (along with video game soundtracks and arcades).

I smell NWR's next set of prizes...

Be careful buddy.....I started off by purchasing some Tales of Symphonia Gashapons/Gachapons, since then I've upgraded my addiction to purchasing Figures up to about 13 inches (expensive).

I think the most expensive so far is the Capcom Ibuki figure i bought, though my favorite is probably the Disgaea Pleinair figure which i caught for pretty cheap (Wind Waker Gashapons close 2nd because the eyes move when u turn their heads hilarious looking).

Feel free to mail me all of your extras.  I'll give them a good home.

Could be worse, could be Figu@Mate.

Feel free to mail me all of your extras.  I'll give them a good home.

Funny you should say that, I've been giving them away recently to anyone who wants them.
They've been the staple birthday present from me for a while now!

I smell NWR's next set of prizes...

Hey you never know!
New guy Matt Walker and I are going to be hitting TGS this week, we may well pick up some "prizes" there too...

They've got Mario gachapons in many stores here too, the biggest pile of those vending machines I've seen was in a Toys'r'us. Many of the machines are just loaded with DS straps and such though.

These are awesome. You get them from capsule machines?

yup, and they are a zillion times better than the stuff you find in....america :rolleyes:

don't get me wrong though, i used to collect those little football helmets!

I got a Yoshi and a Luigi kart from the star catalog, if that counts (and piles upon piles of gachapon and "trading figure" figures imported from Japan).

I got a Yoshi and a Luigi kart from the star catalog, if that counts (and piles upon piles of gachapon and "trading figure" figures imported from Japan).

Out of interest, how much is it to import Gachpons? Can you choose which one you want, or is it in the hands of the seller to randomly send you one?

Play Asia has some, the price varies greatly, the most expensive ones are the "trading figures" but they're also the largest and most detailed ones. I think the content is random, they don't look inside but you can obviously pick what series you want. regular gachapons, trading figures.