Foretales sees you playing as Volepain, a shoebill living in a fantasy kingdom ruled by the upper class. As a thief, he and his companion Leo set out to steal a magical Lyre that turns out to give Volepain ominous visions of the future. Using cunning, your thieving skills, combat, or a bit of tactical diplomacy, they set out to save the world in this card game adventure.

The setup of Foretales approaches the card-game genre from a different angle. In this game you proceed throughout different locations by playing cards from your prebuild deck. Cards enable interactions such as eavesdropping to learn about locations of interest, but also pickpocketing townsfolk or foraging for food. Each playable character has their own unique set of cards that allows for a different play style. The game is divided into two clear segments: exploration and combat. While exploring you attempt to find key items in order to complete missions that aim to prevent catastrophic events from occuring. From a dangerous militia that would kill Volepain's father, to Leo being dragged off to the gallows. In exploration you can use the cards you find to increase resources that give you an edge. Spending your gold on the poor may increase your fame, but stealing from them will increase your infamy and may even attract more guards. All these resources can become very precious because they tie directly back into combat. 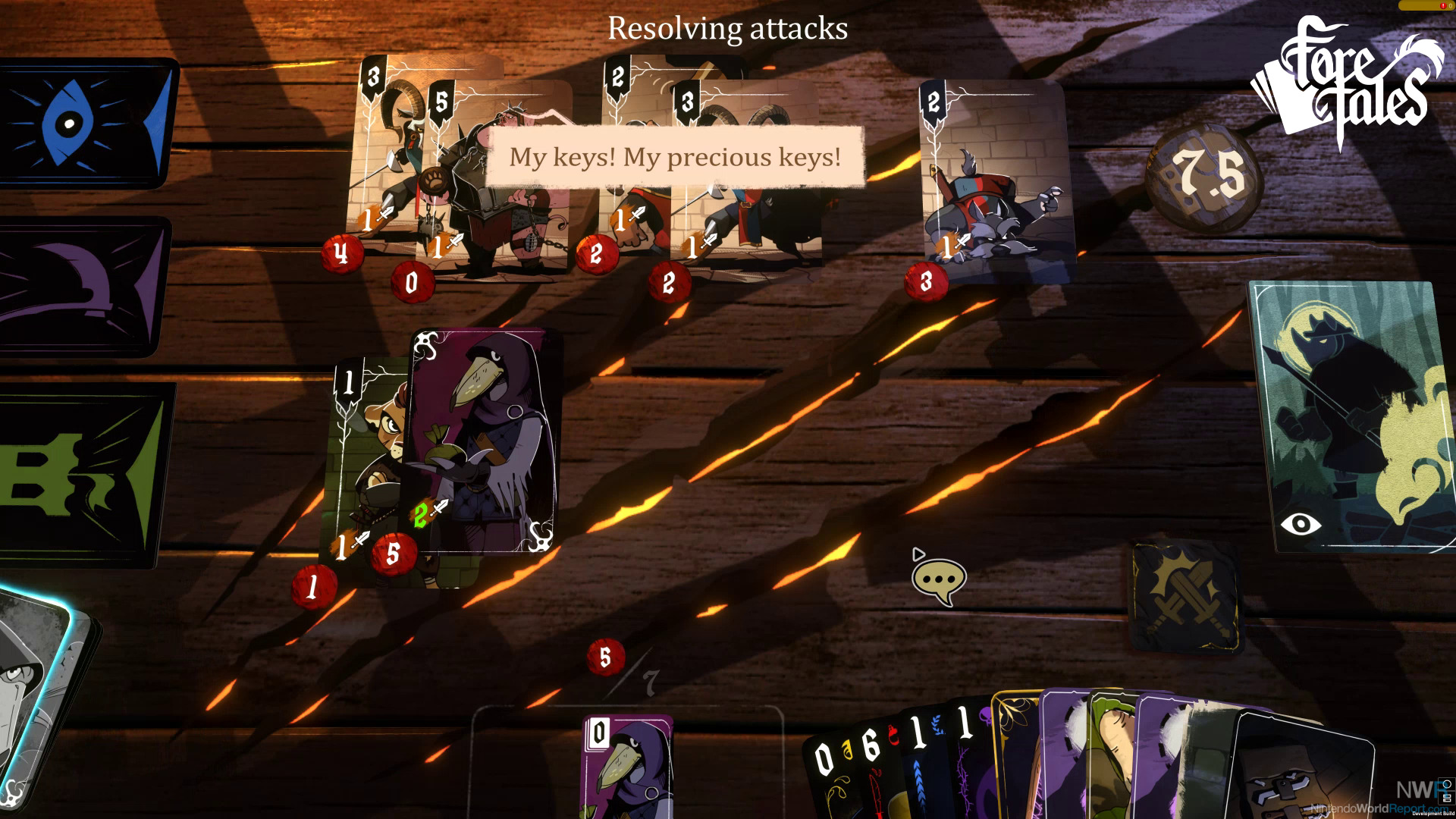 What makes Foretales especially interesting is whenever a location or path is blocked, you need to fight the opposing force. Before starting combat however, you have a chance to negotiate with the enemies. This means that you can use precision shots or a rallying cry to buff your party. What attracted me however was that you can use your attained fame, food, gold and notoriety to lower the enemies morale. When enemy morale drops to zero, all enemies will abandon the fight before it even begins. This means that you can play the entire game without landing a single blow. This turned combat from positioning the strong fighters to deal damage into a more political puzzle. I absolutely loved using character's skills to make boss battles end, just by tossing coins to guards, bribing them with food or simply using the fame I gained by helping the striking mineworkers to make them stand down. I was very successful at keeping up my non-violent approach and that made Foretales feel like a breath of fresh air compared to most other card games I've played. 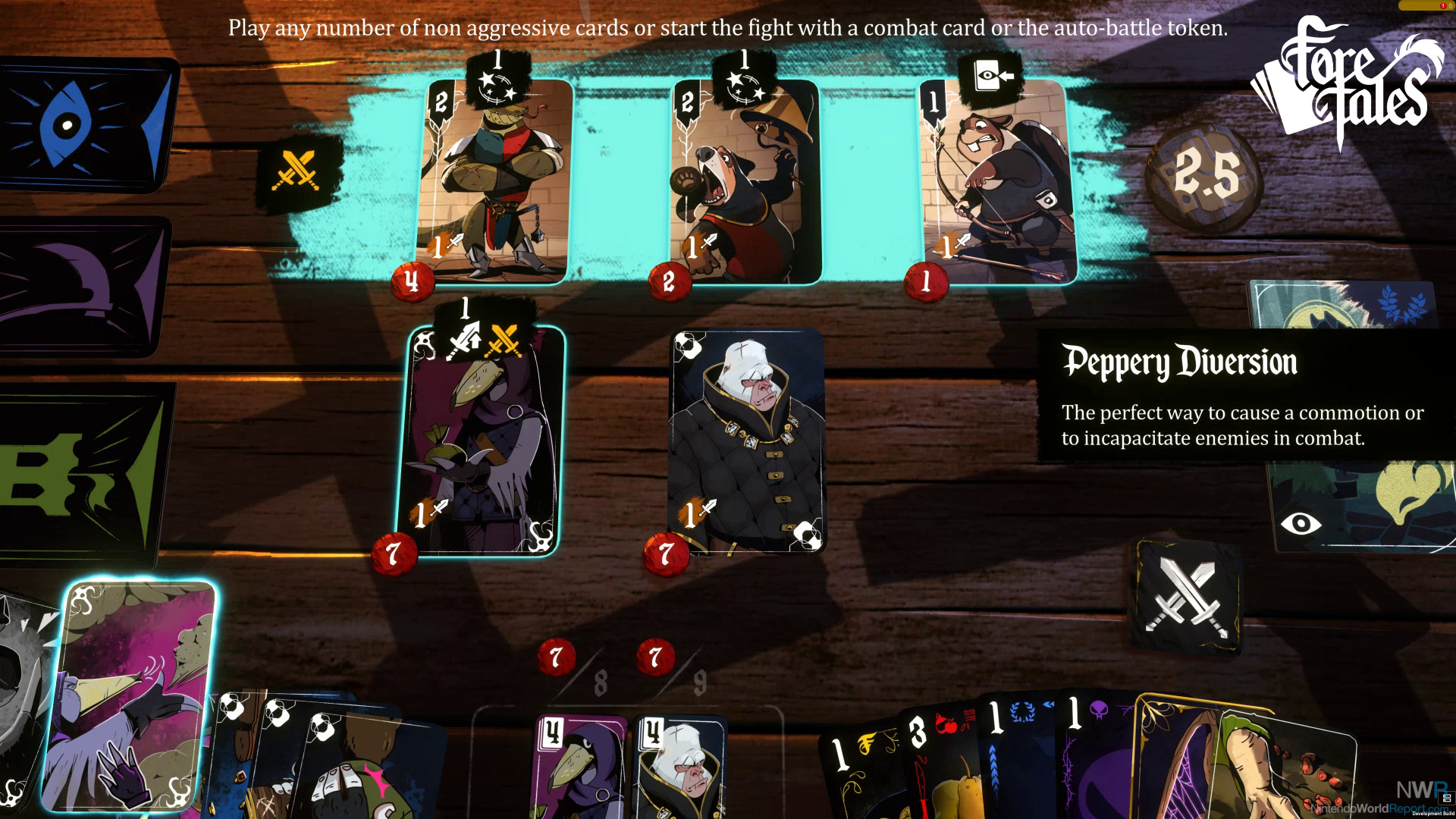 The characters are quite fun as well. While there's only a singular voice actor who narrates the game, thankfully this is not a case of Voice of Cards and the narrator does a great job. The writing feels sharp and witty. Descriptions of items, characters, and locations make the world feel lived in, but also help you to embody the situation that Leo and Volepain are in. Struggling thieves and working class folks who need to scrape to get by and are thrust into adventure not on their own accord, but still doing their best.

The mission select reinforces that idea. Missions have a set number of turns before their consequences influence the outcome of the events. I was too late to stop an infection spreading in one of the mines, which ended up causing the infected to destroy one of the major cities. This meant that I was unable to access several other missions. All these elements definitely promote the idea of replaying the game in a multitude of ways, with different party members and even doing different sidequests. 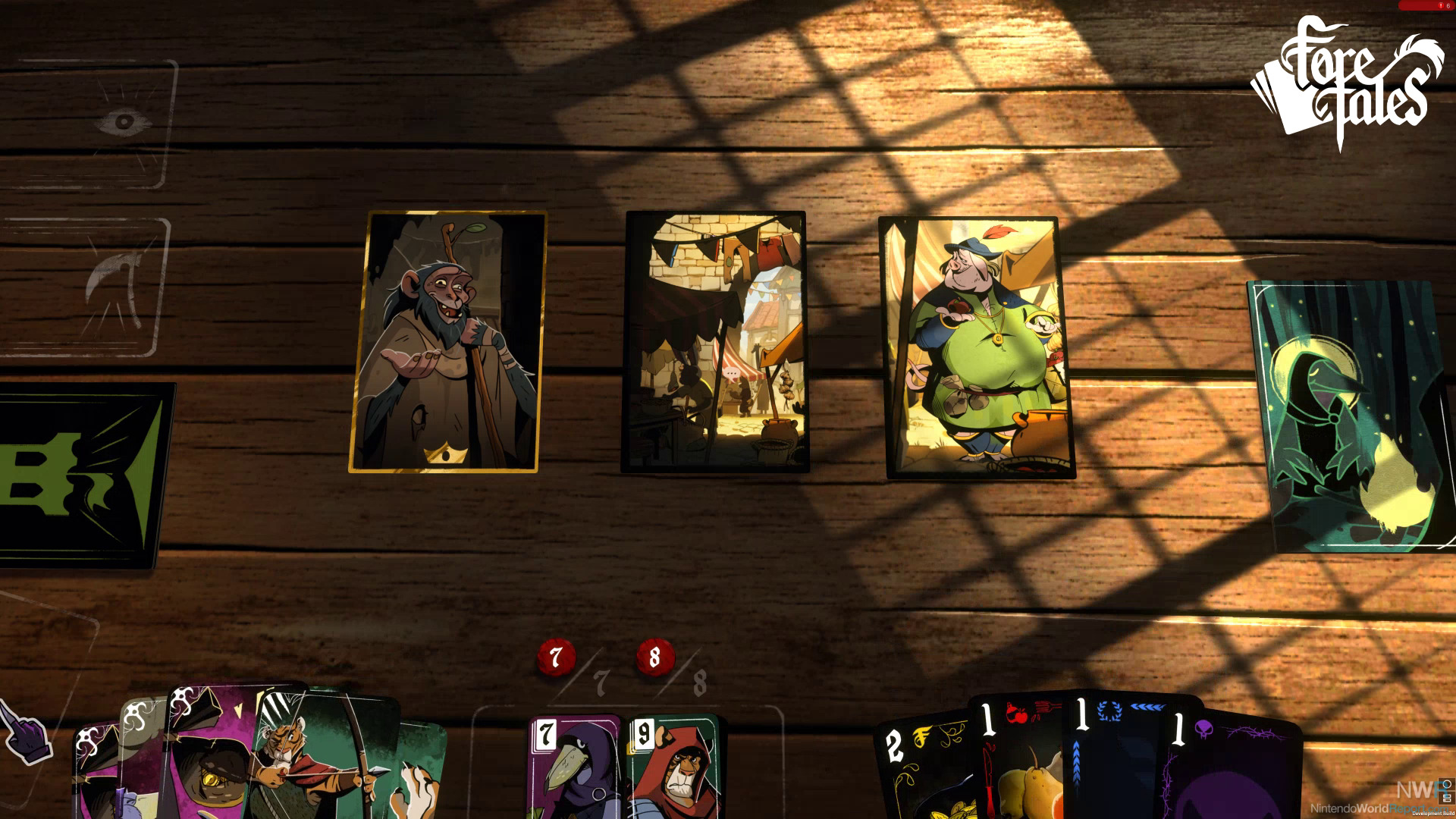 That being said, the Switch version did leave me with some gripes. The controls are finicky and will take some time getting used to. You can access different parts of the screen with the buttons, but often need to cycle through a long list of cards or select specific piles of cards you want to browse through. It is clear that this game was designed with either a mouse or a touchscreen in mind and the transition to a controller is a bit lackluster in that aspect. I also found the image quality of the cards themselves to be a bit lacking. The art of the game is really nice, with a lot of fun details in the artwork of the cards. But on switch, especially in handheld mode, the cards tend to be a bit too compressed. In combination with the controls this meant that I often had to go through every card of a party member to distinguish them from one another. It makes the play experience feel a bit cumbersome because of that. Finally, the music fits the tone and atmosphere of the game, but generally got too repetitive for my tastes. The same guitar plucking and lute strings just weren't enough to keep me engrossed, especially because you'll revisit quite a few locations with the same tunes. 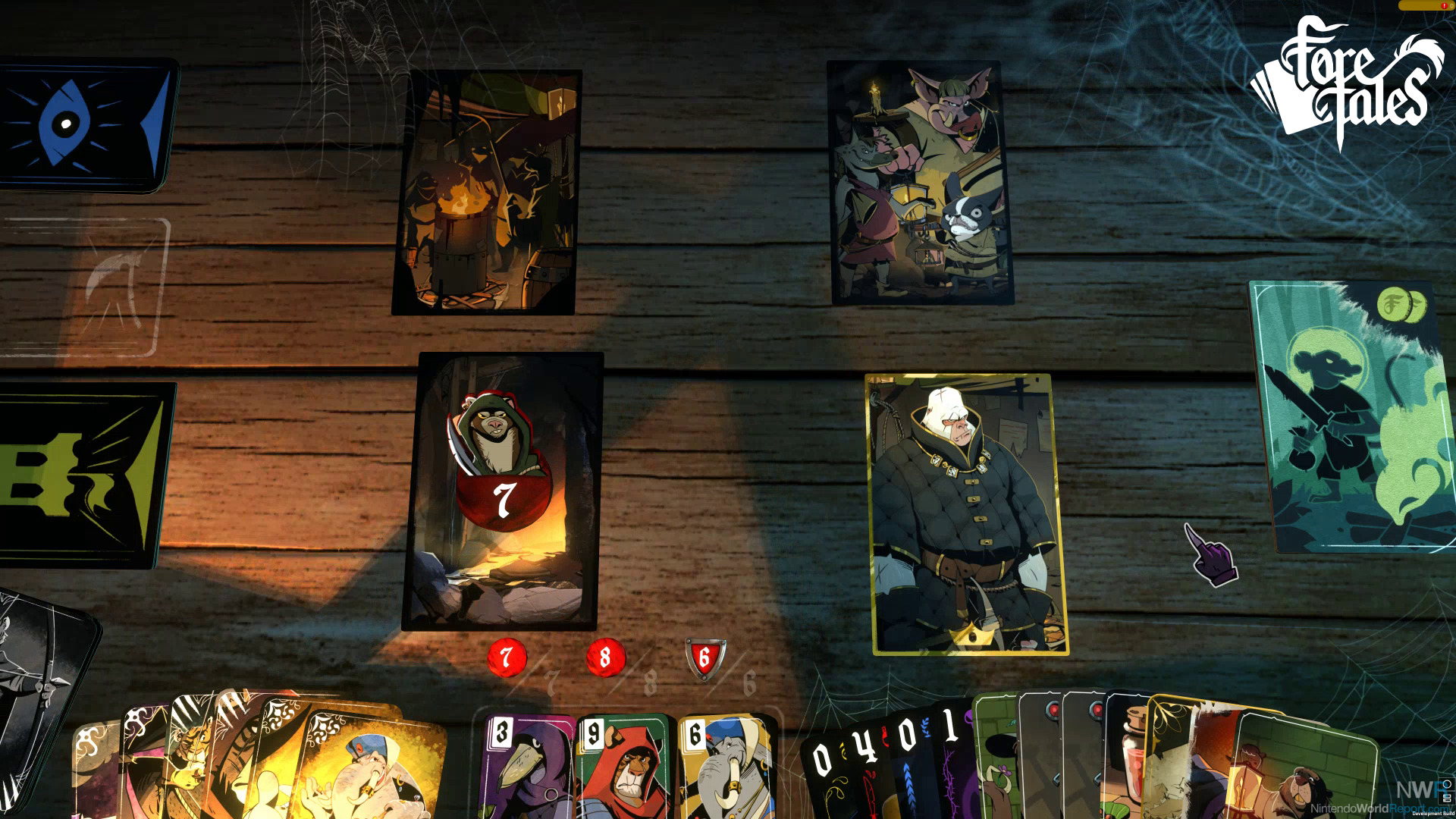 Overall Foretales approaches the card game genre with a unique narrative approach. I found the freedom in roleplaying using the card system very satisfying. I've never seen diplomacy deployed as a major card game mechanic, but it made me approach the game in radically different ways. Where stealing sometimes was the right answer in order to bribe guards and avoid a confrontation. While the switch version has a few gripes when it comes to the visual fidelity and the interface, I was very pleasantly surprised by the end product. If you like card games and want to play a narrative driven game with a refreshing approach, Foretales may just be exactly what you are looking for.