Way back in 2016, I reviewed a fun Geometry Wars-like shooter called Hyperlight EX for 3DS. Developer CatfishBlues Games recently released it on the Switch eShop with a bunch of improvements, making it the ideal version to play. If you’d like to read a short explainer on the original, check out my old review. Fundamentally, the game has not changed, but it’s definitely improved thanks to the addition of several quality-of-life features.

First and foremost, Hyperlight Ultimate looks great. It looked good on 3DS already, but now it really shines on a competent display. I actually prefer to play it on my TV, where the beautiful, colorful chaos really gets an opportunity to shine. Oh, it looks great on the Switch itself, but this is a game I’d classify as one for the big screen. Arcade Mode now gives you three lives per stage instead of one, so it’s more approachable. Even with that buffer, bosses are still lengthy affairs that will probably require multiple attempts. 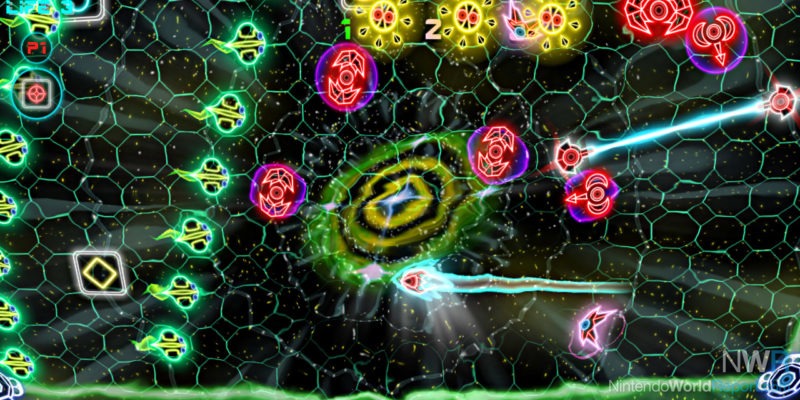 You can now use most weapons when you want to, rather than being deployed as soon as you hit their icon. For bombs especially, this is a huge advantage. Additionally, using a weapon actually gives you a small FTL bump, although it’s no replacement for just going and picking up fuel icons. Endless Mode and Panic Mode have also been retained from the 3DS original, and I really do wonder if there are any Hyperlight EX players who really got into Panic Mode because I just can’t do it. One of my main complaints about Hyperlight EX was that the leaderboards weren’t online—that has been rectified here, thankfully, and I was pleasantly surprised to see that I’m not terrible at it.

One nice new feature is that Arcade, Endless, and Panic Modes can all be played with a friend (couch co-op). This is fun but also ratchets up the “chaos” factor quite a bit, especially considering you share the FTL meter. A multiplayer deathmatch mode allows up to four players to try and annihilate each other using a combination of weapons and FTL ramming. It’s a pretty good time, if a little bare-bones.

Hyperlight Ultimate is still a great game, and now that it’s on a modern console you should definitely play it.