Songbringer is a retro love letter, but ink can be messy.

If old school with a new degree is your jam, Songbringer could be something to sing about. It harkens back to the early days of desperate searching, when you had nothing other than your own thoughts (and maybe the game manual or a strange 1-800 hint line) to help you progress through a game. The kicker? It’s a procedurally-generated action game. So, depending on the six-letter word you submit at the start of a new file, you’ll find a unique map populated with your chosen word (somewhat) influencing the world. In theory, there are millions of possible variations for map layout and certain challenges within the quest. 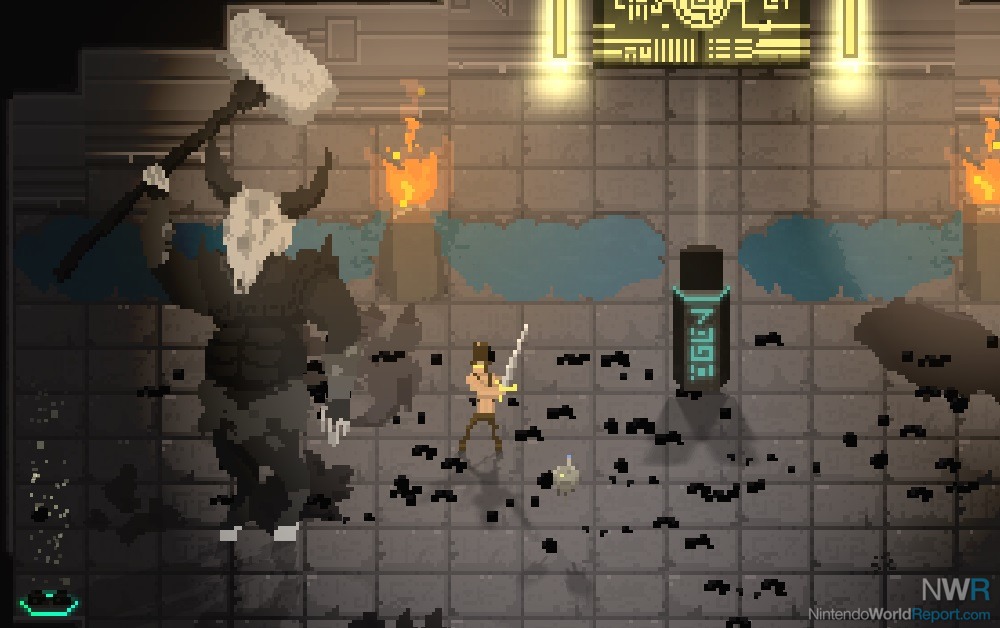 The story opens with a spaceship crashing on the planet, Ekzera, piloted by a galactic warrior named Roq Epimetheos and his trusty skybot, Jib. Once you find the nanosword (and awaken evil) in a nearby cave, the adventure starts rolling, and from there you battle through a Zelda-like overworld with hidden caves and dungeons spread throughout. Along the way you’ll discover shops with power-ups and chests with all variety of items (even psychedelic mushrooms that occasionally reveal hidden doors). Many of the items you collect will later be used in puzzles of varying difficulty, though, and you should expect to just find plenty of rooms full of hack-and-slash fights.

Your little drone buddy, Jib, occasionally offers assistance and shares cutscenes with Roq, tossing up new story elements and histories that help ferry along the quest. However, the comedy is a bit forced and the dialogue isn’t as charming or great as it clearly believes itself to be. As you proceed, other planet inhabitants offer pieces of information which chip away at the plot, so you eventually concern yourself with the world around you.

But in the grand scheme of things you’ll feel all alone, just left to explore. It’s an exciting and fresh challenge at first, but the map can be a bit tricky to traverse because some boxed regions start to bleed into others. Since each area of the map is clipped and loads separately instead of a clean scroll, you’ll organize the map into specific quadrants, but it becomes clear why games have moved away from this map style. The same could be said for the music, which at first sounds lovely and refreshingly retro, but eventually includes tracks featuring awful jarring noises that sound something like car alarms from hell.

As for the ability to create a whole new world from a different 6-letter word when starting a new game file, well, it’s still a very cool idea. The look and feel of the world changes quite a bit depending on your word, but the wonder had already worn very thin long before the end of the first play-through, so a second run didn’t hold my interest for very long.

Songbringer is the game that fans of the original Zelda have longed for, spiced up with a slick Hyper Light Drifter aesthetic. It might not, however, strike a chord with anyone else.