Angry Worms would have been an acceptable title.

Moorhuhn is a series of casual games in Germany, starring the “Angry Chicken.” It has run the whole gamut of genres, and in Knights & Castles it sets its sights on the mobile game Angry Birds, although not without a few twists. Unfortunately, besides being incredibly derivative, it’s lacking in polish and is badly adapted for Switch.

Moorhuhn Knights & Castles asks you to build a castle out of walls, ramparts, and weapons in order to shell your opponent’s castle into submission. The victor is the one who destroys all their opponent’s weapons or the enemy throne room at the heart of the castle. Building the castle out of these blocks costs money, as does upgrading them. Money is won by destroying enemy fortifications in battle. The battles are waged by selecting a weapon and adjusting the angle and power, à la Angry Birds. Much like Angry Birds, some weapons have additional powers that can be activated mid-flight. Do enough damage to a component, and it breaks. Break a wall, and everything stacked on top of it breaks as well. 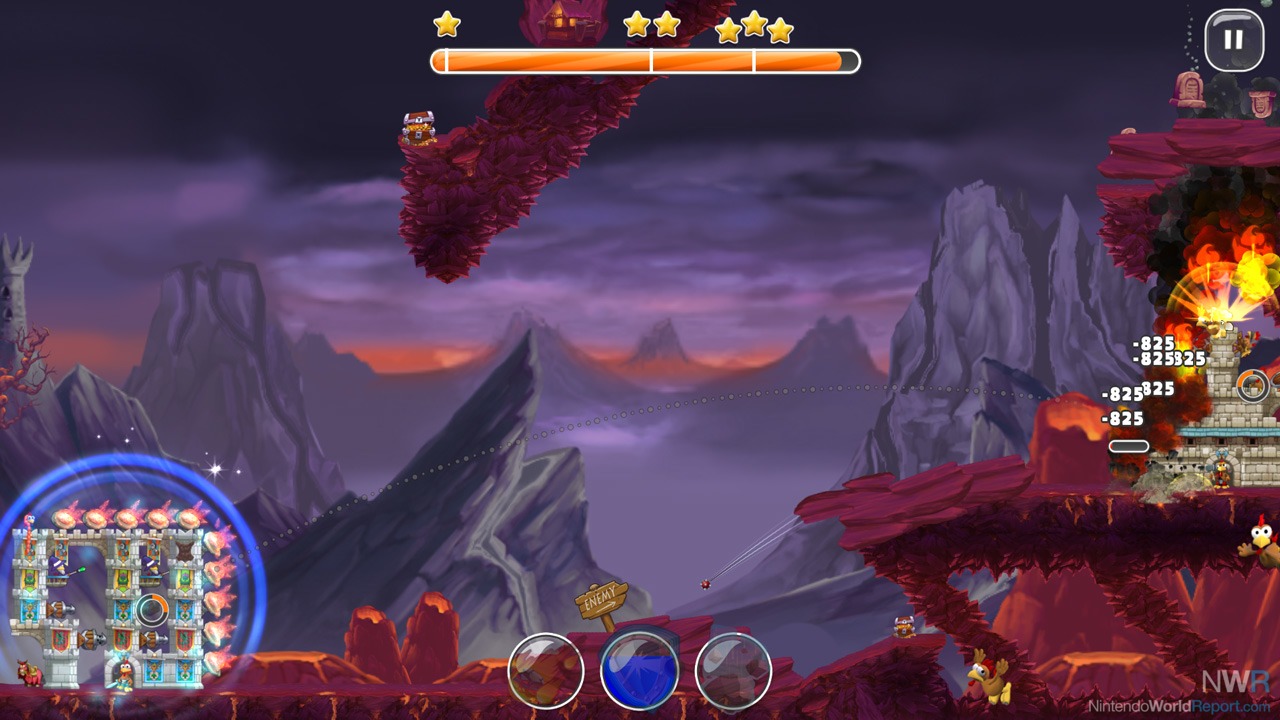 As the game progresses, you’re confronted with increasingly upgraded enemy castles and disadvantageous level geography. The enemies have an endless war chest with which to upgrade their weapons and fortifications, whereas your wealth is limited. Beyond the relatively paltry income, the cost of each upgrade quickly becomes staggering and each battle renders enough gold to repair the castle and perhaps buy a single upgrade. If you win. If you lose you’ll be stuck in an endless grind of retries, saving small sums of money, until you can buy an upgrade AND repair your castle, to hope for better luck. Simply put, it’s not particularly enjoyable, the upgrades come too slow and cost too much, and the enemy’s advantages seem unbalanced.

While most battles can be won with a few perfectly placed shots, the controls render that a matter of luck. The attempt at converting touch controls from an obvious Tablet/Mobile game to the Joy-Con is frustratingly poor. The buttons and sticks that control the various selections and actions seem arbitrarily chosen, and the game does such a poor job highlighting menu options or weapons that you’ve currently selected that it’s tough to tell what you’re controlling. The touch controls are better, as this is the default control for the game, but the motions - like pinch zoom - are not as responsive as they need to be. The game also relies on your tapping a weapon, and pulling back and down to set the angle and power of your shots. This action is frequently countered by the dynamic camera shifts, causing shots to fire wildly. The small screen of the Switch is ill suited, since your units are jammed in the back corner, meaning it's not unusual for your finger to slide over the bezel while aiming, causing a shot to fire inadvertently. You can zoom in to get better control, but at the cost of seeing your enemy, limiting your ability to target them. 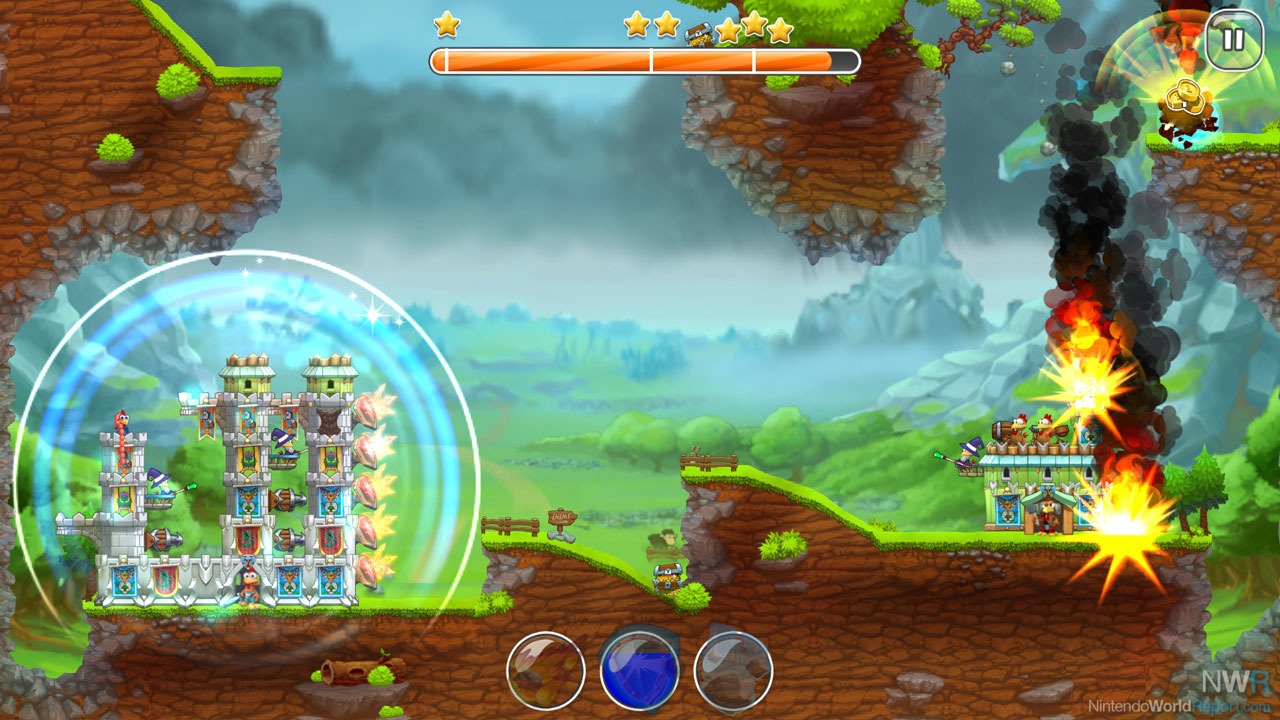 The visuals leave much to be desired, looking closer to a game found in the discount bin of a different era. The art style is reminiscent of a 20-in-1 PC game release of the late 90s and the menu styling is lifted directly from Mobile games. The “angry chickens,” all dressed as various medieval tropes, are unappealing and devoid of any detail or character. The backgrounds are uninteresting and often look disjointed. This game simply looks cheap.

Moorhuhn Knights & Castles is an obvious port of an also-ran Mobile game, looking to borrow from the success of more popular Mobile titles. It feels like a race against more renowned titles to Switch, that ultimately it won, but in so doing failed to bring anything worth experiencing. It lacks in execution, polish, and charm. Its welcome is quickly worn out with the endless grinding necessary to buy the upgrades required to advance against stacked odds. To top it all off, the port to a console - even one with a touchscreen - is poor. Conceptually, a tower defense game with Angry Birds combat works well enough, but here it just isn’t any fun to play. This game isn’t worth your money or your time, which makes the $30 asking price particularly outrageous.

The Moorhuhn isn't angry, it's a swamp chicken, I don't think they have any personality or traits beyond their looks... The games do frequently come in those 20-in-1 boxes though. On the other hand we had legit 20-AAA-games-in-1 boxes in the late 90s...


The whole franchise started as an advertisement for Johnny Walker whisky, as a simple and free shooting gallery. The publisher used to be a regular games publisher but at some point decided to divest from publishing quality games to focus entirely on the Moorhuhn franchise...