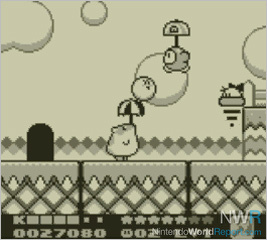 Kirby isn’t Mario. His games aren’t known for their difficulty or speed, but their charm and Kirby’s trademark copying ability are usually enough to make the games a unique experience that only the pink ball of fluff can deliver. However, Kirby’s Dream Land 2 is one of the few examples of a Kirby game that tries to add something new—this time Kirby’s animal pals—but fails to deliver an experience that’s able to overcome the series’ slow gameplay and low difficulty. 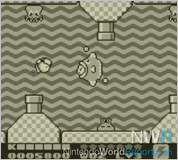 Kirby’s Dream Land 2 is the second Kirby platformer to include his copying ability. Unfortunately, it’s also a downgrade from Kirby’s Adventure for the NES, since Dream Land 2 only includes seven of the 26 unique abilities available in Adventure and presents none of its own. The game instead tries to alleviate this by introducing Kirby’s three animal pals, Rick, Kine, and Coo, but they actually hinder Kirby’s abilities rather than help him. While using them, Kirby’s copying abilities are altered slightly, but not always in a helpful way. For example, the Needle ability surrounds Kirby’s entire body when he uses it, but it only affects Rick’s back. Additionally, when using Rick or Kine, Kirby can no longer fly. However, the abilities gained when using them don't make up for what's lost. 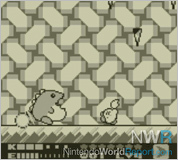 Sadly, Kirby’s pals and abilities aren’t the only disappointments in Dream Land 2: the game is also pitifully easy and slow. There are levels that you can complete by simply holding a direction on the D-Pad. The game does have hidden objects called Rainbow Drops that you can collect to fight a hidden boss, but collecting them is more frustrating than enjoyable. The only real enjoyment in this game comes from its boss battles, some of which are even fairly difficult, but even then they aren’t enough to save what is, in the end, an unremarkable entry in the Kirby series.

Wow! As biased as I am and recognizing that I'm very biased here, I couldn't have expected a 4.5. Really 4.5??? I'd give it an 8, but knowing my history with the game I expected to see a 6.5 as the absolute worst.
This is the first Nintendo game i ever owned and I loved this game as a kid. Since I loved it so much I decided to buy it I mean it's only $3.99. I still like this game. I also like Kirby's adventure, but I actually like this one better. Don't be afraid to give it a try.

From what I've played of Dream Land 2, it seems like everything good and interesting about it is better in Dream Land 3.

Neal, I can't dispute that because I never played Dream Land 3, except for one thing getting Dream Land 3 is $8 while 2 is only $4 so my question is, is it enough better to justify double the price?

Neal, I can't dispute that because I never played Dream Land 3, except for one thing getting Dream Land 3 is $8 while 2 is only $4 so my question is, is it enough better to justify double the price?

Throwing money out the door, from my experience, DL3 is far better.
With money in the equation, if the $4 different is that huge of an impediment, then I don't think I'd recommend either game, honestly. But if you want to play good Kirby game, check out DL3.

Well, Neal, that being said maybe tonight I'll just have to fire up the Wii U and download it. Maybe I'll find this better experience. How's the multiplayer on it? That part would be nice as my kids like playing Nintendo with me.
Thanks

Well, Neal, that being said maybe tonight I'll just have to fire up the Wii U and download it. Maybe I'll find this better experience. How's the multiplayer on it? That part would be nice as my kids like playing Nintendo with me.
Thanks

Multiplayer's fun. It's like the helper character from Kirby Super Star, and you share the same health, I believe. Check Zach's review for more details: http://www.nintendoworldreport.com/reviewmini/34405

Did KDL2 really come out before KA?  Either way I enjoyed the GB game very much, especially the Super Gameboy coloring treatment it had.


Consequently I am pissed the 3ds doesnt have those pallettes available, even the gba allowed the altering of color schemes........

Wow, that score is shocking! Is it really that bad? I've owned this game since its original release, and I quite enjoyed it when I was younger. That being said, I really haven't played it since, so I really can't support or refute this review.


However, when comparing it to KDL3, I think I remember there being more secrets in KDL2. As mentioned in the review, you can search for Rainbow Drops throughout the game (sadly, I don't think I ever found all of them). In KDL3, the game is more of a linear progression from left to right, is it not?

I remember finding all of the rainbow drops. When you do it lets you fight the final final boss...hint it's not King Dedede.
Yes I still enjoy this game, in fact after this conversation I pulled it out again today and beat another world in it. Dream Land 3 might in fact be better (I'll know after I try it), but this game is still good

This game looked a lot better on Super Game Boy. Too bad Nintendo is too lazy to implement it.

Did KDL2 really come out before KA?  Either way I enjoyed the GB game very much, especially the Super Gameboy coloring treatment it had.

I didn't really care for KDL3.... the levels were longer.....but they were also more boring to me.......  the goals for each stage were a nice touch but I was so bored with the game by the time I got to the end, I didnt want to go back to complete the objectives i had missed to get the true* ending.

I played KA after playing KDL2, so I can't feel it being a step back,  it was one of those gb games that didnt suffer a lot from the blur you got with some of the earlier games.  Quite enjoyable for a portable game, which might also be why it was made to be shorter* than KA.

I actually found getting to some of the secret areas in later worlds to be really hard. I must suck or something!

I will have to respectfully disagree as I consider this to be Kirby's very best main series game.

Yeah, I gotta say this score is surprising. I've always felt this game was the high point of the series. There are fewer power-ups than KA, but the animals modify all the existing ones so there are plenty of combinations. The rainbow drops were a challenging deeper layer to the game (making it through an auto-scroll dry land level with the lightbulbed fish was super difficult), and the true final boss is pretty hard as I recall. Most of the other Kirby games felt shallow comparatively.