Shooting yourself in the head shouldn’t be this satisfying.

Since its original release over a decade ago, Persona 3 Portable had long been trapped on Sony’s PSP and Vita. Debuting after the original Persona 3 and Persona 3 FES, Portable is famous for allowing players to choose a female protagonist from the beginning of the game, which Persona 4 and 5 would move away from. P3P is also condensed in terms of movement and exploration, taking a cursor and menu-based approach in contrast to physically moving a character from area to area, at least outside of the series’ traditional dungeon crawling. Without question, it skews on the longer end of JRPGs, with my most recent playthrough clocking in at just over 40 hours, and that’s as someone who had finished it once before on Vita and played quickly for review purposes. The upgrades brought to this remaster of P3P, though, help it retain staying power as a solid and engaging entry in a series that has continued to gain a fanbase.

P3P begins with a choice between a male or a female protagonist, and I opted for the latter. As a new transfer student, you move into a dorm with fellow students who end up becoming your friends and party members. The cast definitely has a few standouts, such as Aigis who joins the group about halfway through, but on the whole I found them a little less endearing than those from Persona 4 and 5. P3P’s narrative is a captivating one, with the school transforming into a massive, multi-floor tower called Tartarus during the Dark Hour, a hidden hour just after midnight. Tartarus represents the primary dungeon of the game, one to which you’ll return regularly to power up your characters, acquire new demons (personas), and complete side quests. Outside of the dungeon, every few weeks you have to defeat a boss or two roaming the city during a full moon, but you’re given ample warning about when such an event is going to occur.

Guiding your chosen protagonist through the school year during the day and navigating Tartarus and the Dark Hour at night is highly addictive. No matter what activities you take on, you’re always making progress in some way. Speaking of the recent Persona games in particular, the feeling of seeing your social stats like Academics, your character level, or your S-Link (Social Link) ranks climb is endlessly gratifying, and having a multitude of choices each in-game day makes the game very hard to put down. I spent much of the early part of the game working at two of the shops at the mall to build up social stats while also earning some money to buy better weapons. With my Courage and Charm at a higher level, I had greater access to different S-Links, so I could unlock more side story beats and make fusing personas more effective. 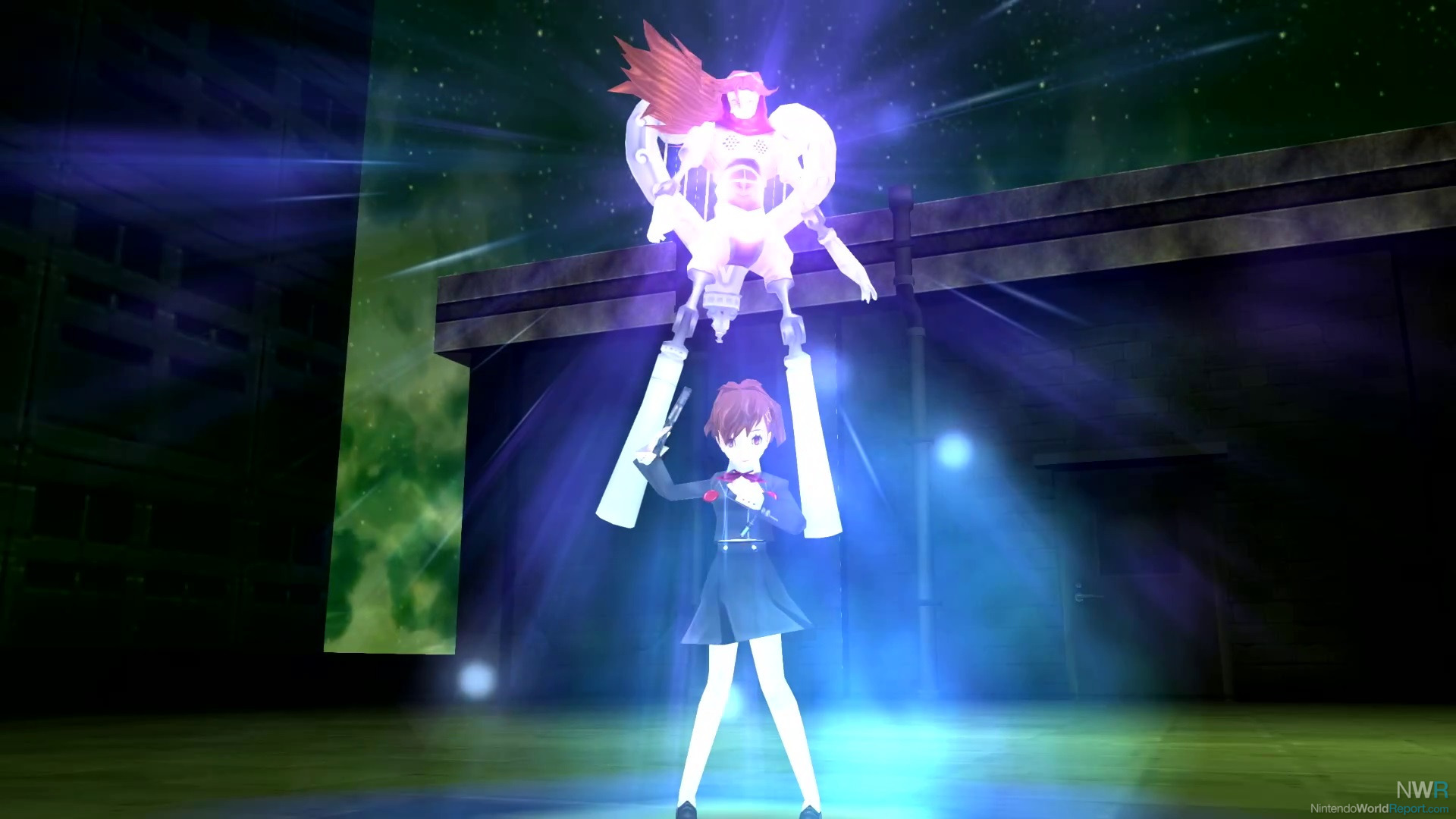 Tartarus itself contains over 250 floors, and the floors themselves are randomly generated. The floors are divided into six blocks that each provide their own color palette, but for the most part the visuals of the dungeon are fairly boring and repetitive. Persona 4 and especially Persona 5 would improve on this issue quite a bit. Still, the “press-turn” combat system that rewards you with an extra turn when you score a critical hit or strike an enemy’s weakness remains a delight, and it’s one of my favorite types of combat in a turn-based RPG. Carrying a balanced team that can hit a variety of enemy weak points while also not having your party too susceptible to a specific element or two can be the difference between climbing to higher floors of the dungeon and endlessly seeing your party wiped.

Without a doubt, there are some particularly challenging boss fights throughout P3P. Grinding at various points is practically a necessity, which is made a little easier with some of the customization options added for this remaster. In addition to multiple difficulty levels you can switch between at any time, there's also an experience boost or decrease you can activate. Frankly, trying to get through the final boss gauntlet is such a Herculean task that no one should feel guilty for making ample use of these features. 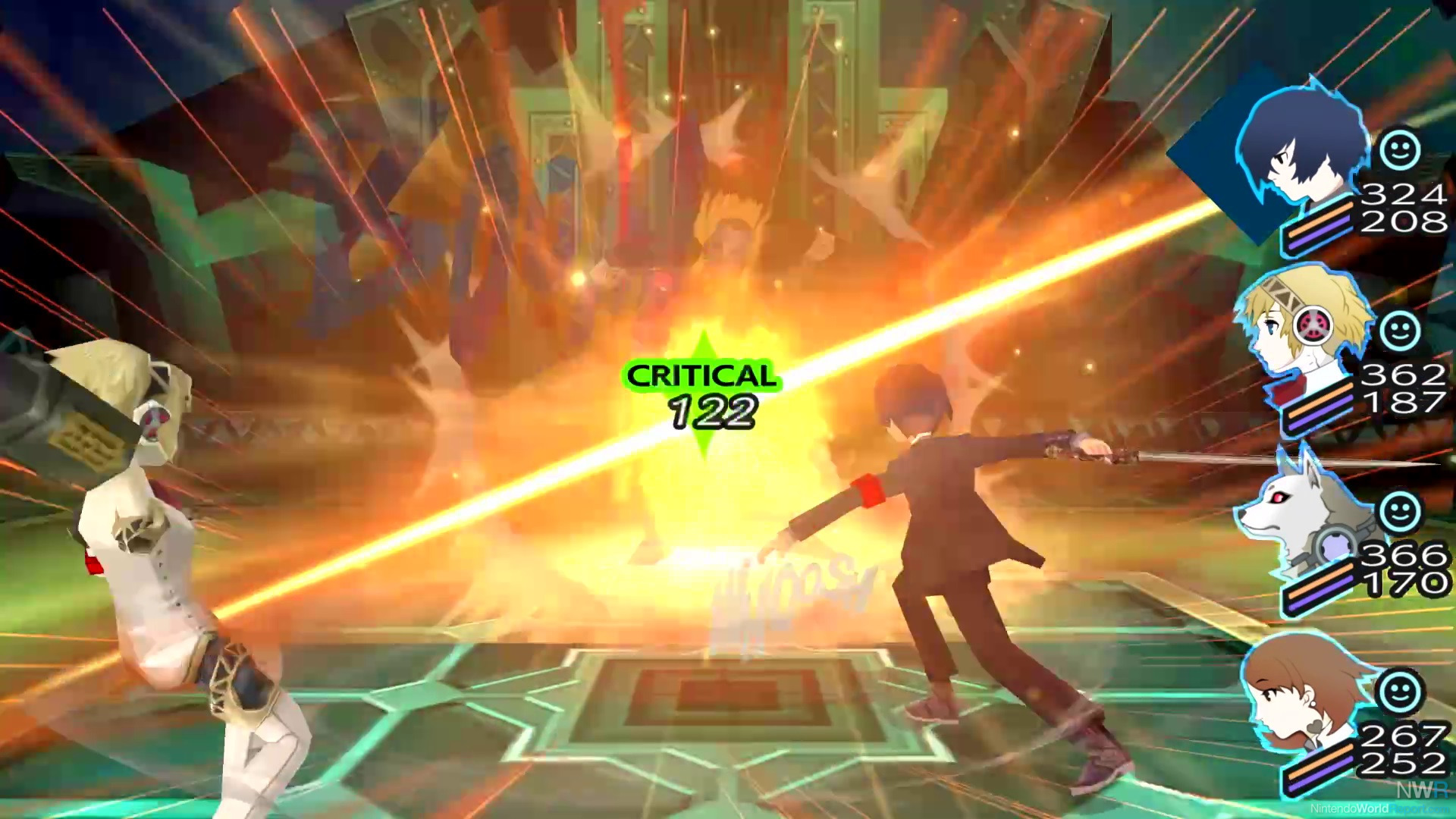 Reiterating on an early point, the lack of mobility and 3D exploration in P3P does put a bit of a damper on the experience. It's harder to connect with its world and characters because they just aren't as visually realized. That said, there are some genuinely charming, heartwarming, and engaging moments to be found among the game's dozens of hours, and the way in which you almost can't see everything in one playthrough makes its new game plus all the more enticing. From purchasing items through the home shopping channel on Sunday, to meeting the old monk at the club on weekends, and even going on a date with Elizabeth, the character who helps you perform demon fusions and offers most of the game's side quests: P3P is full of day-to-day tasks that manage to captivate in that repetitive RPG fashion. It doesn't hurt that the hip-hop and jazz-infused soundtrack is full of certified bangers.

Even though its sequels would largely improve on the formula, Persona 3 Portable remains an enjoyable but formidable challenge. It packs a healthy amount of content into its lengthy runtime, and if the combination of school life sim and dungeon crawler strikes you, there's little reason not to dive right in. It's worth considering that P3P does feel a fair bit darker in tone and theme, complete with characters needing to shoot themselves in the head to summon their personas. For those who first played the game on PSP or Vita, the visuals and performance have received a noticeable boost over the original version, in addition to now being able to quick save your progress at any time. The update doesn't reinvent the wheel, but added quality of life features definitely make this the ideal way to play Persona 3 Portable.