At night I dream of being in Rhythm Heaven.

Melatonin does a wonderful job of creating a lo-fi, pastel-colored version of rhythm game darling Rhythm Heaven, and that's high praise. Nintendo's version of WarioWare but with music, the Rhythm Heaven series has been conspicuously absent from Switch. Fortunately, developer Half Asleep has come up with a venerable substitute whose presentation sets it apart from what’s come before.

The premise of Melatonin is that every night a man falls asleep on his couch and dreams of all sorts of fantastical situations and vivid memories. The dreams function as the stages of Melatonin, and each one features different music and a unique mini-game. If you're a fan of lo-fi beats, you're going to dig the music here, but if not, don't expect much aural variety. The lack of any real story is a slight knock against it, but fortunately the gameplay and presentation are exceptional. 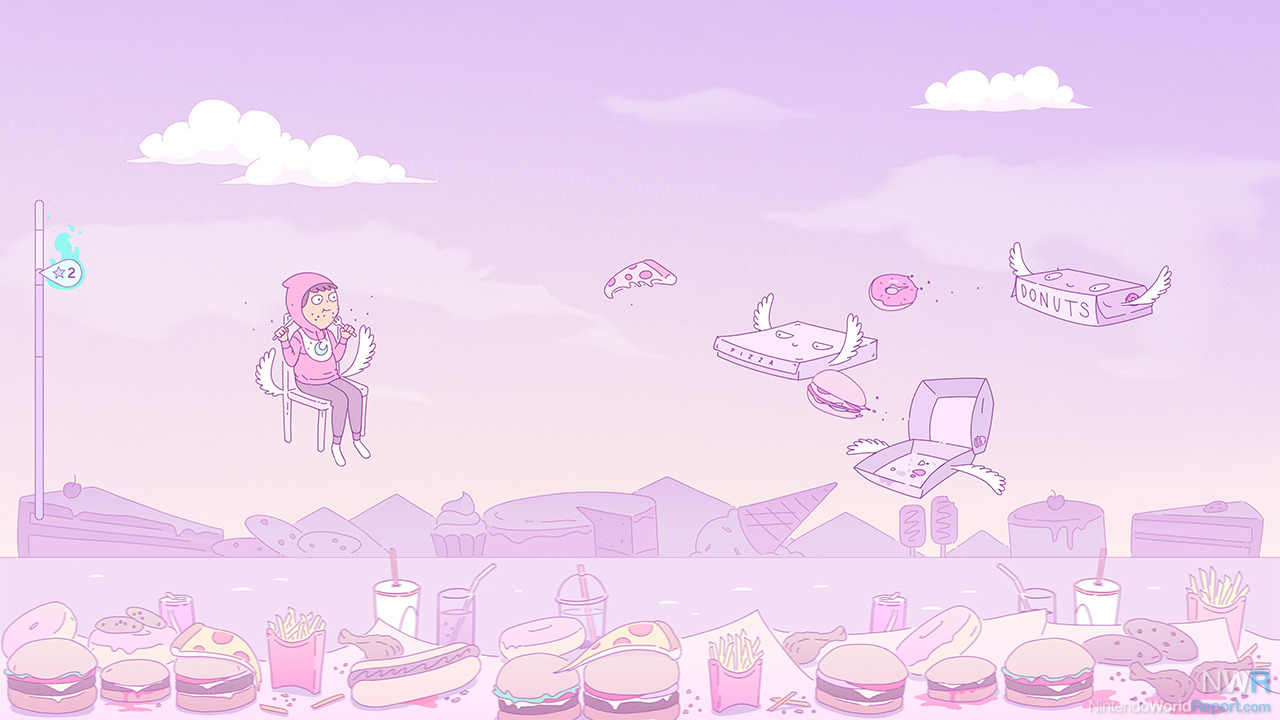 Across four nights and a finale, 21 stages have to be completed to roll credits on Melatonin. Each night contains five stages, with the fifth being a mash-up of the previous four. All five are connected by a loose theme, which makes sense given that they are all part of the same night's dreams, and each one can award up to three stars on regular difficulty and three rings on Hard Mode. Because every stage is unique, it begins with a tutorial that explains how the mechanics of that stage work, while also offering a chance to practice said mechanics before hopping into the scored version of the level. During each night, you’ll need to earn eight stars in total before the final stage opens up, and then score at least two stars on that final stage to move to the next night. Even though the experience may only last a few hours, going back to play every level on Hard Mode (which ramps up the speed) or achieve perfect scores on completed stages is a worthwhile incentive on its own given how fun and charming the game is.

By default, the tutorial operates with a timing circle in the middle of the screen to assist with your button presses. The only three buttons used during gameplay are A, L, and R, making the Switch an easy place to pick up and play the game. A smattering of accessibility options allow players to, for instance, keep the practice circle on outside of the tutorials or make early, late, or missed notes less of a penalty towards your score. Most of the time, you'll be relying on sound cues that function as prompts for your button presses; visual cues appear as well, but the stages have clever ways of distorting what you see to force you to rely on what you hear. Overall, Melatonin seems a great entry point for newcomers to the rhythm genre but ramps up the difficulty nicely as you progress from one night to the next. 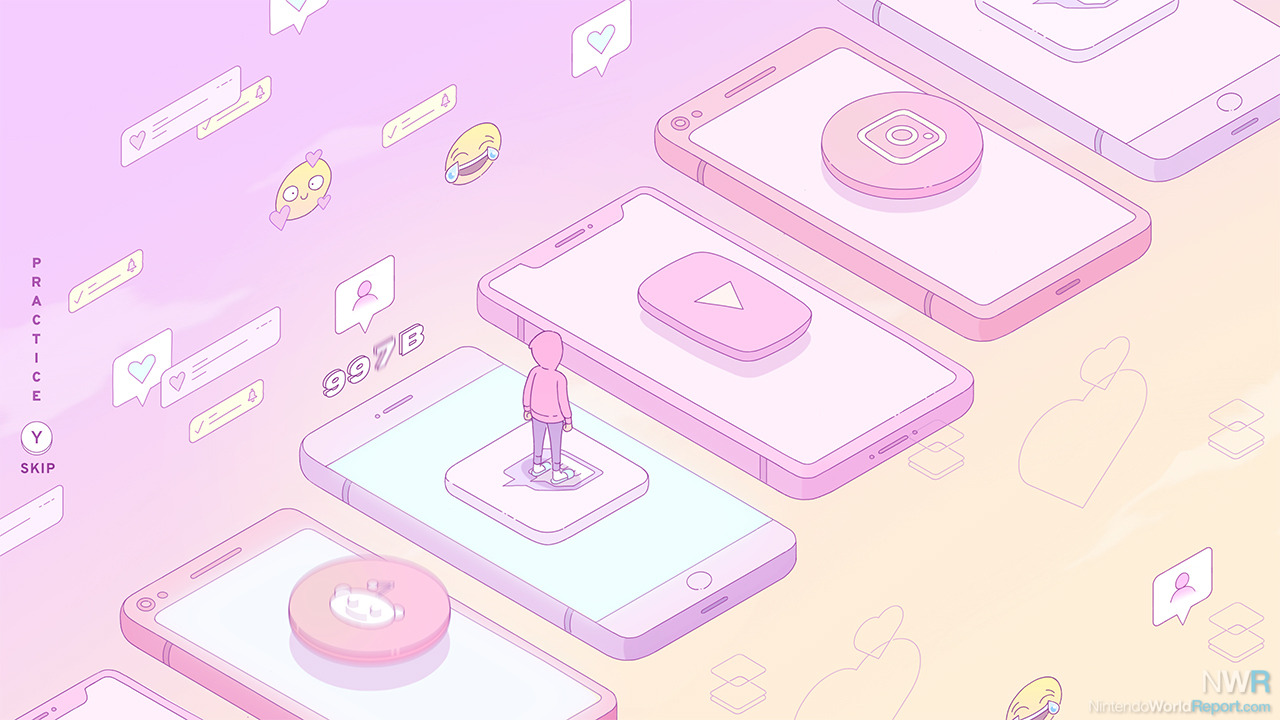 In terms of how it looks and sounds, Melatonin employs a cartoon aesthetic with hand-drawn visuals that work well for what it is. It's satisfying to be able to choose which of the four stages to play during each night, as you can walk from one to the next and play them in any order. The background music is quiet and soothing, and as someone who listens to a fair bit of lo-fi, I loved the different tracks accompanying each stage. The clean UI helps to bolster a comfortable and relaxing experience that is nearly impossible not to bop and nod along with.

Whether you're watering dream flowers, catching hamburgers in la-la land, or socking a few dingers mid-snooze, Melatonin makes and leaves behind a warm and inviting impression. You can even edit each of the non-mashup levels to make your own customized version. From both a gameplay and presentation standpoint, what's here is nearly unassailable, and the game serves as an exquisite reminder of just how spoiled we are with the wealth of indie titles on Switch and also how astonishing it is that it took until now to get a flattering facsimile of Rhythm Heaven on Nintendo's latest console. Playing this late at night might not boost your brain's melatonin levels, but it’s sure to leave you smiling before bed time.

I loved this game. It almost perfectly captures the feel of Rhythm Heaven. I do have an issue with it though. I don't think the sound design is as good as Rhythm Heaven. There are a few levels I struggled to do well because the sound cues aren't distinct enough.
The Office level was one of those. I ended up turning the music volume down a bit in the settings to make the cues more noticeable.
The Money level was ok until the thunder where it switches sides, Im really bad at that bit.
The level with the ladders, Stress? All the cues sound almost the same. I don't know how you would do it without completely relying on the visuals.

My favourite level is probably the one with the crane, I don't remember what it is called.

I also like how there is a harder version of each level.

Like Rhythm Heaven, Im not good enough at it to get Perfect on any of the levels, but I will at least try to get three stars on as many as I can.

After years of nothing indies have finally cloned Rhythm Heaven and somehow it all happened in the span of last two years: last year, Rhythm Doctor came out on Steam, Melatonin on Steam and Switch was this year and upcoming Bits and Bops just released a demo on Steam!

I wishlisted this after it was mentioned on the NVC podcast. Sounds like it might be best to play handheld to reduce lag. Make sure to put your TV in game mode kiddos.