This New 'n' Tasty version of Abe's Exoddus is not without its issues.

Did you enjoy the “New ‘n’ Tasty” remake of Oddworld: Abe’s Oddysee back in the previous console generation? Our own Joel DeWitte had a pretty good time with the 2020 Switch port. I own New ‘n’ Tasty on PS4 but still haven’t cracked it open. I have fond memories of the Windows port of the original 1997 PSOne game, though I doubt I made it very far. Alas, I did not stick with the Oddworld games for all that long, and after a brief attempt at Munch’s Oddysee (an Xbox launch title), I fell off the wagon. Thus, I never played the “sidestory” games, Abe’s Exoddus and Stranger’s Wrath. I was excited at the announcement that the former–a direct sequel to Abe’s Oddysee–had been remade for the PS5, but with those consoles in short supply, I accepted that I might never play it. Somebody up there was listening, though, because an “Oddimitzed” edition was just ported to the Switch.

I’m happy to say that yes, Soulstorm seems to be a “New ‘n’ Tasty” version of Abe’s Exoddus, but my patience for this kind of game has receded in the twenty-five years since my tryst with that Windows original.

This game kicks off immediately following the ending of Abe’s Oddysee–our hero and his band of Modokon refugees, rescued from becoming Soylent Green at RuptureFarms, have settled in a subterranean cave system but are quickly discovered by one of the villainous Mollocks and his army of Sligs. Abe and his brethren are separated quickly, and after surviving the Slig attack and finding his way out of the caverns, Abe goes about re-rescuing his Modokon family and helping the remaining Modokons in other RuptureFarms plants.

Soulstorm features much of the same gameplay as was in New ‘n’ Tasty: Abe traverses a 2.5D stage, using a combination of platforming, item use, and possession to make it past Sligs and other enemies, as well as find various pickups and rescue Modokons. Possession is limited only by the occasional appearance of devices which zap Abe out of his chant, disallowing possession in that instance. Abe can use brew bottles to spread fires, then use water to put the fires out. He can throw Slig-stunning proximity mines, then tie up the snoozing Sligs to take them out of commission. He can also, of course, possess Sligs and use them to take out other Sligs before imploding them to regain control. 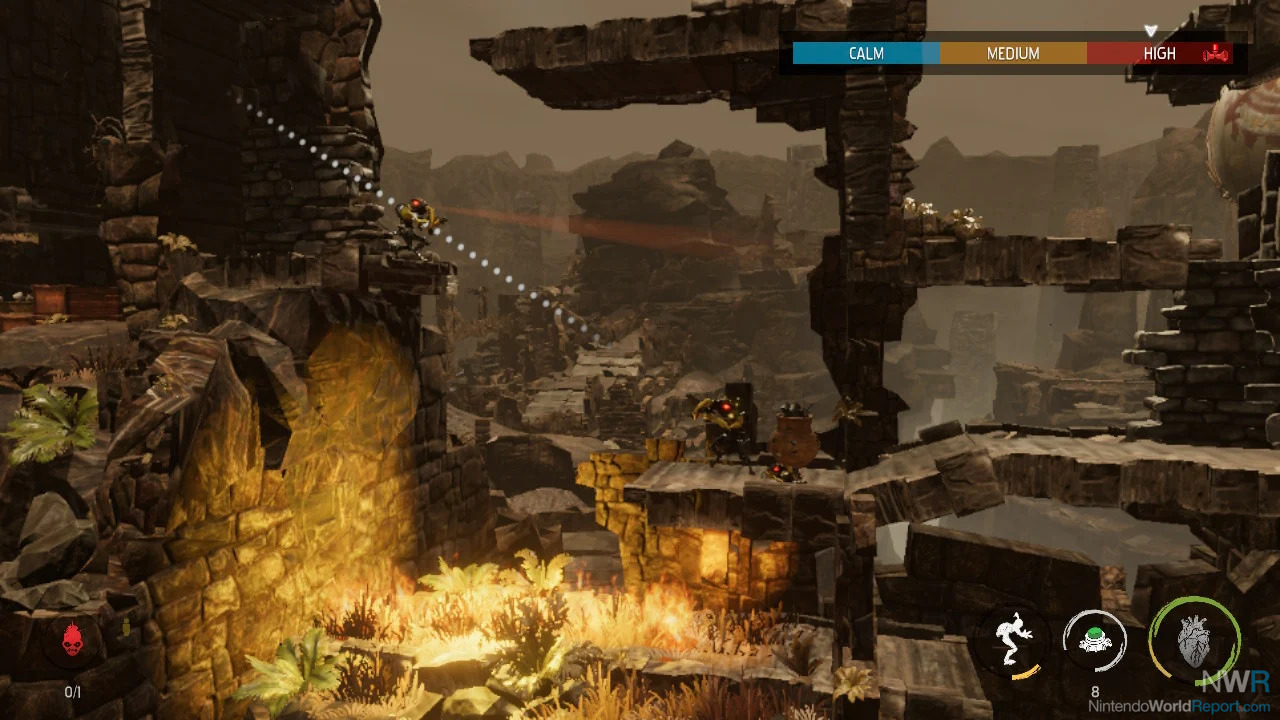 Soulstorm feels less like a new game and more like an expansion of New ‘n’ Tasty, and seems to differentiate itself by asking you to juggle small groups of Modokons at any given time. You may be asked to rescue them from a multi-level structure that requires a good amount of stealth, item use, giving direction, and avoiding environmental hazards. Losing too many Modokons ends the game early, so you’re almost encouraged to replay levels where you wind up losing too many NPCs. Granted, Soulstorm does more or less ramp up the difficulty and complexity pretty well, so you’re never presented with a situation that is completely alien to you. That said, there’s a lot of trial and error, and some of that is due to Soulstorm’s iffy controls.

Abe’s biggest enemy in his adventure isn’t the Mollocks or Sligs, but the imprecise controls. To begin with, your button presses don’t always register, which seems important. There were so many times where I tried to jump or throw an item and it just didn’t happen, which would occasionally lead to my death, but would more often lead to frustrating re-traversal. Whether water doused a flame or not was always a 50/50 gamble–potentially wasting one of your water bottles. Judging distances while jumping, especially vertically, is weirdly difficult, and I found myself defaulting to a running start in places where it probably wasn’t necessary just to be safe. Abe’s new (‘n’ tasty) double jump helps things, of course, but this has encouraged the developer to implement weird vertical shafts where the double-jump, itself, feels too restrictive.

Further, it’s not always clear what Abe can and can’t grab ahold of or even where he can land safely. Part of this is the map design, but another part is the unusually busy outdoor environments which don’t look great compared to the PS5 version–not a huge surprise, but a lot of the environmental components look like vestiges of the PS3/Xbox 360 era.

I recently broke down and bought the Switch version of DOOM (2016) on sale because I’d been impressed by Panic Button’s ports. While perfectly serviceable, that port appears to be missing a couple layers of graphical fidelity, as though a few texture or lightning effects are simply missing from the environments. It’s much the same situation here, but with so much puzzle-solving tied to reading your surroundings in Soulstorm, it’s a bit more frustrating.

Thankfully, interacting with Modokons is painless, and they do what they’re told quite well. The Lemmings-like segments are perhaps the most enjoyable in the game, but you’ll have to endure a few hours of toil to get there. It is a funny sight to see a small band of Modokons following Abe in what should be a line but winds up looking like Alucard’s shadow in Symphony of the Night since they all technically occupy the same space. However, performance takes a hit the more Modokons you have tagging along. 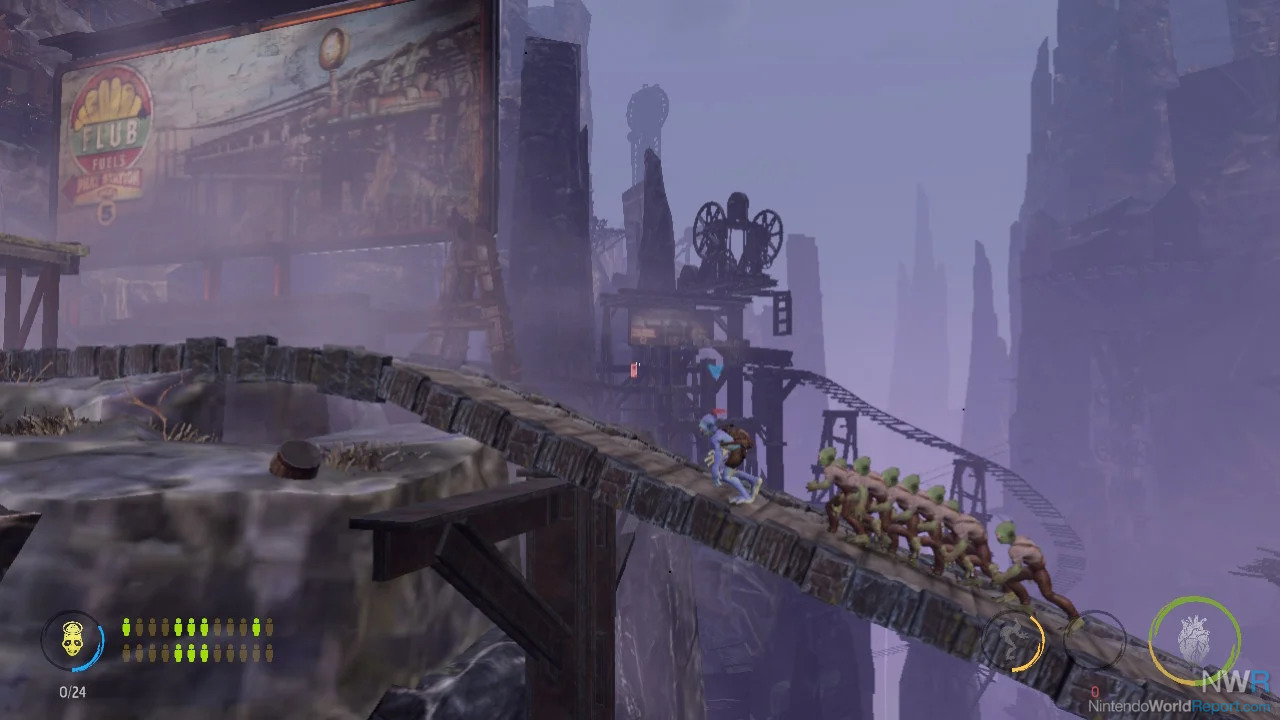 The few segments where you must defend large swaths of escaping Modokons, however, are not as fun–you’ll usually be possessing enemies to prevent other enemies from shooting the Modokons down, and I wish you had more methods at your disposal. I also didn’t particularly care for crafting. To be fair, I almost never care for crafting in a video game: it’s an arbitrary way to make “getting an item” more taxing. Given all the containers, lockers, and enemy pockets that Abe must pillage during his journey, it would’ve been quicker just to give me the items instead of making me find the components, repeatedly (if you die).

I didn’t particularly care for the story, although it might be more accurate to say I didn’t care for Abe himself or his Modokon brethren. They all speak in a slow-as-molasses, nasally, croaking drawl. Every time a Modokon opened his mouth, I readied myself for an agonizing monologue. It takes them five minutes to recite three lines of text. Abe, as the reluctant savior of the Modokons, displays all of Luigi’s cowardice with none of his charm. The story itself is rather interesting, with some fun twists and turns, but unfortunately projected through the lens of the uninteresting Modokons.

Overall, there were too many irritations in Soulstorm to win any of my enthusiasm. Every play session left me somewhat frustrated, and I often had to talk myself into booting it up. If you’re dying to revisit Abe’s Exoddus, this is certainly the best way to accomplish that. I just wish it was a little more fun and a little less janky.